To entertain is one thing; to entice is another. Films and TV series too often embrace the idea of the former at the expense of narrative bravery, spoon-feeding mind-numbingly generic plotlines to an easily sated audience. On the flip side, we frequently see the mavericks become so enamored with their own vision, they lose sight of the audience entirely, all but ensuring their project will never capture the interest of mainstream viewers.

After seeing six of the shorts, I can safely say some viewers will find the series’ the violence and nudity gratuitous and off-putting. The show pulls no punches, which results in pointed jabs but also wild swings. Some may criticize its male gaze, which looms large at various points. But many will find it enthralling, provocative and cheeky. It’s everything at once—and most definitely never dull. The visceral finished product is unlike anything else currently housed in Netflix’s endless library. That fact alone makes it worth watching.

Aesthetically, Love, Death & Robots is textually rich, vividly realized and versatile. Credit must be given to Blur Studios, which eschews visual continuity for an eclectic, ever-changing universe of imagery. The artistry here is top-notch. Naturally, some shorts connect more than others, but with run times between five and 15 minutes, you’ll never feel trapped.

“Sonnie’s Edge” portrays a savage, neon-lit dystopian future in which people who control monsters fight in high-stakes gladiatorial battles. The allure of inhabiting this world takes hold like the launching point of a fascinating RPG video game, though the story may bask a bit too much in its over-the-top brutality. “The Witness” reorients the driving concept of Alfred Hitchock’s Rear Window while commenting on how perspective can influence the idea of guilt and innocence, but it seems consumed by its voyeurism—the main character is an exotic dancer, and we see her dance naked excessively, while her privates are exposed during a grisly act. At times, the project’s hyper-masculine point of view can suffocate things. But Love, Death & Robots is meant to throw a lot at the wall and see what sticks, and much of it does with a satisfying thwack.

“When the Yogurt Took Over” is a standout, putting a poignantly absurd cherry on top of humanity’s yearning and search for a species-wide savior. It’s quite funny in an intentionally ridiculous way. “Three Robots” manages to find charm and humor in a tale that takes place after humans’ extinction, poking fun at our excess and cultural norms. “Alternative Histories” kills Adolf Hitler six different ways, so it’ll clearly be a crowd-pleaser. And “The Secret War,” which feels like a throwback to a Metal Gear Solid battle scene, is downright thrilling. The show often manages to handle complex themes in an unsanitized, adult-skewing way we just don’t see in mainstream entertainment these days. Family-friendly and easily digestible this is not.

Does that completely wash away the narrow perspective of certain shorts? No. Can the series feel reductive in its gorgeously realized world-building? Yes. Love, Death & Robots certainly has its peaks and valleys. But there is a solid enough foundation to latch onto, enough commentary to make a point, and enough unhinged, bedazzling eye candy to thoroughly entice. 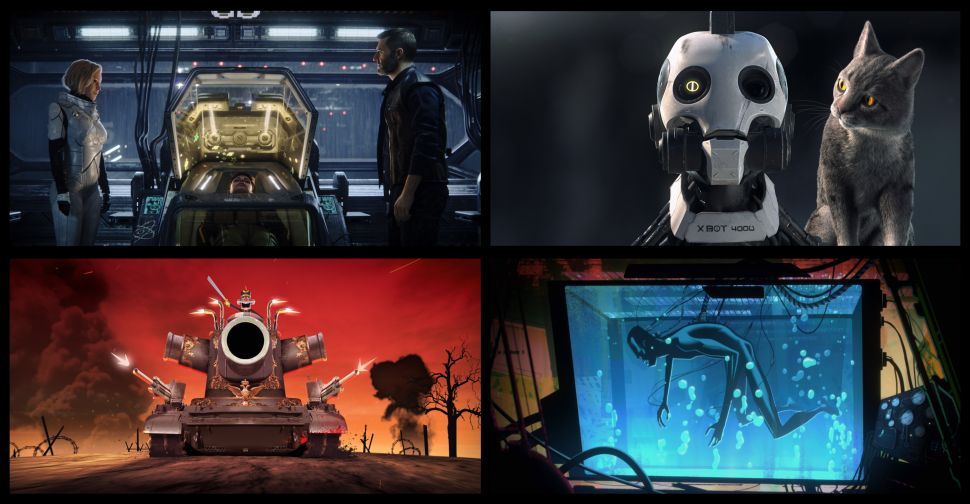