Shortly before the NCAA Men’s Basketball Tournament began, an article surfaced that decried the dearth of African-American coaches in the March Madness event. While it was well-intentioned and identified a problem, the essay all but ignored the success of diverse coaching staffs. Such publicity might have actually convinced other schools to hire such coaches, whose success has been typically under-appreciated on the court, as evidence demonstrates.

“College basketball has a coaching diversity problem, and it’s going to be on full display at the NCAA tournament,” wrote Pat Forde with Yahoo Sports. He then proceeds to denounce the men’s college basketball programs for not having more African-American coaches.

“In terms of coaching diversity, here’s where we stand: There are roughly 35 bids expected to be doled out to the Power Six conferences Sunday, and at present only one of the Power Six teams assured of getting in is coached by an African-American. Florida State, led by Leonard Hamilton, is it… If Hamilton is the lone diversity rep from the power elite, the NCAA tourney might as well be lacrosse.”

And that’s the only part that even mentions Coach Leonard Hamilton in the entire column. There’s nothing about Hamilton and FSU’s impressive run to the Elite Eight, to show he’s not just some lucky fluke. In fact, he’s amassed an incredible record of success over the last few decades, but those accomplishments were shunted aside in favor of repeated denunciations of white college presidents and white athletic directors.

Not to mention, he’s hardly the only black coach, even from just the state of Florida. The nation put everything on hold on the last day of the opening round of March Madness to watch the top-rated Duke basketball team get pushed up against the wall by African-American Coach Johnny Dawkins, a former Duke star. He lead the upstart University of Central Florida to nearly beat the #1 basketball program in the country, falling short by only a missed layup and missed tip-in. Yet, he was only named once in Forde’s column, with no word of his accomplishments, even though nearly every NCAA program is now wondering if they should pursue Dawkins to elevate their own men’s basketball team.

Ask yourself this: Would you hire a black coach because you were shamed to do it, or because you realized that there were a lot of under-appreciated African-American coaches with good track recordsof success?

Seminoles Find Success, While Governors Goof It Up

One way to determine if you should hire a coach for men’s basketball is to not only see how he’s doing at his current program. But you should also see how the teams that passed him over have fared without him.

Unlike Forde, Glenn Bell of USA Today and Andrea Adelson of ESPN Sports have documented Hamilton’s impressive career. They noted that Hamilton, the former Austin Peay Governors assistant coach, was told he wouldn’t be the next head coach by the school president, only because of his skin color. As Adelson reported:

“[Austin Peay president Joe Morgan] looked at me,” Hamilton recalls. He says, ‘Leonard, nothing would make me happier than for you to be the head coach at Austin Peay. But I’m retiring in two years, and for you to be the first black head coach in the Ohio Valley Conference—I don’t think I can make that happen.'”

Since turning down Hamilton, Austin Peay has had almost as many losing seasons as winning ones, with only five NCAA appearances and one win. Hamilton has doubled that number of wins just in the first round this year, and has had twice as many NCAA appearances as Austin Peay since that fateful decision (with two Elite Eight runs). Heck, Hamilton’s winning record in basketball’s premiere conference, the ACC, is better than Austin Peay’s in the Ohio Valley Conference since he was told he wouldn’t be the Governors’ head coach.

It wasn’t the only time Hamilton was yeeted out of a job after serving as the hard-working assistant, patiently waiting his turn for just a chance at success, only to be pushed aside for “the right sort.”  It happened again at the University of Kentucky, where Hamilton, as Coach Joe B. Hall’s loyal assistant, was passed over in favor of Arkansas Coach Eddie Sutton.

All Sutton did was coach a Kentucky program which earned massive NCAA sanctions that came within a whisker of leading the school to receive a “death penalty” for its actions. Only a brilliant bit of coaching from Rick Pitino may have saved the Wildcats from extinction after three years of probation. A few years later, African-American Coach Tubby Smith also led the Kentucky program to an NCAA title. Hamilton, meanwhile, helped turn the Miami Hurricanes from nothing into something, before revitalizing the FSU basketball team.

It’s a similar story for Dawkins. Before coaching at UCF, Johnny Dawkins was at the helm at Stanford University. Though not known for its basketball prowess (the Cardinal do have a title from 1942, and a single Final Four appearance in the 1990s), the school canned Dawkins despite two NIT titles and a Sweet 16 appearance, and a win-loss record of 156-115 (a 57.5 percent winning percentage).

Dawkins’ replacement has a record of 48-49, win one NIT appearance. If you were the Stanford athletic director and you learned there was a coach who made it to the NIT Final Four his first year, won his school’s first NCAA game in history, and came within a measly point of beating the best team in the league, you’d hire him right away, right? Well, his name is Johnny Dawkins. Congratulations, Stanford. For a school with a reputation of being so smart, that wasn’t a brilliant move.

The Future of Men’s Basketball Coaches

All across America, African-American coaches are being let go, or their ouster is being considered.  Arkansas fired Michael Anderson, while Alabama is looking to buy out Avery Johnson. But is that driven by results, or perception?

“We need African-American guys to get interviewed, and get jobs and have time to turn around a program,” Johnson recently said, according to Forde’s Yahoo Sports article. “The more guys get a chance to interview, the more opportunities they’re going to get. And maybe then there will be better representation.”

Another who should get some more attention is Liberty University’s Ritchie McKay. Cut short by the New Mexico Lobos despite a winning record, he helped Liberty reach the second round of the NCAA with an upset over Mississippi State, seeded seven spots ahead, the first NCAA win ever for the school.

These coaches aren’t looking for pity. They are looking for a fair shot, like anyone else. Forde may decry the sport’s “bad optics,” but a better tactic might be to show evidence that African-American coaches can be just as successful, and programs that pass on them or fire them prematurely may not be better off. Using race instead of one’s record to determine success may be the real March Madness out there. 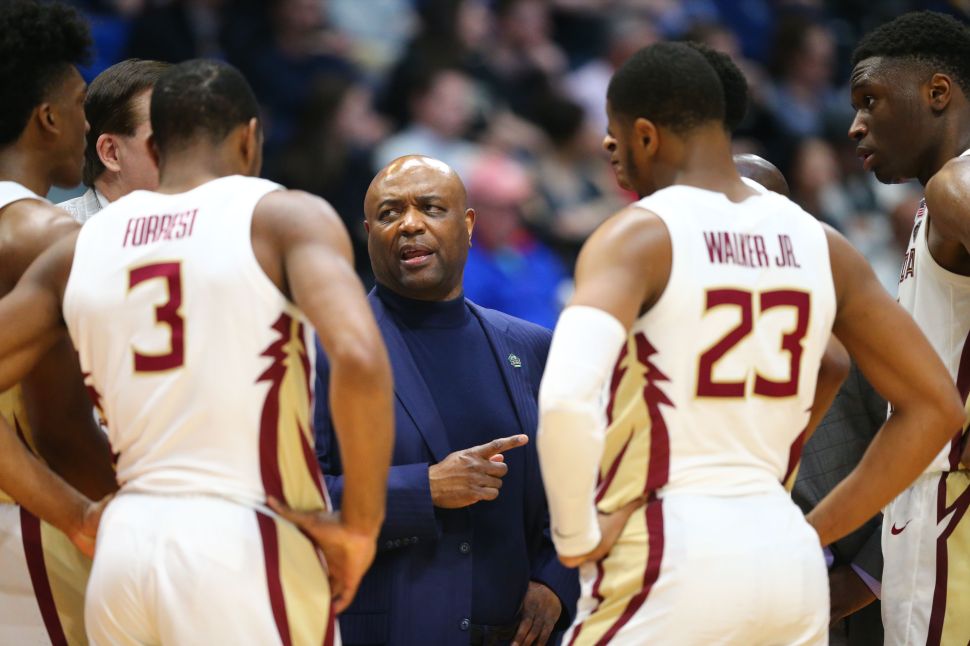