Michael Bloomberg announced this week that, after months of careful consideration, he would not be running for president in 2020. And at 77 years of age, such a decision is tantamount to putting a bookend on one’s political career—at least as an elected official. But by staying out of the crowded field of contenders jockeying to take on Donald Trump, Bloomberg has aptly positioned himself as the ultimate force in Democratic politics. He has become, in essence, the Obi-Wan Kenobi of the Democratic Party, more powerful in his political afterlife than he ever was as an elected official or as a potential presidential candidate.

For anyone not familiar with the original Star Wars, the George Lucas 1977 space opera which ushered in the era of modern movie-making and went on to spawn the highest-grossing film franchise in history, the name Obi-Wan Kenobi might not mean much to you. But for those of us not living under a rock, the name Obi-Wan immediately conjures up the image of Sir Alec Guinness (no, not Ewan McGregor!) playing the role of an aged Jedi Knight, an old soldier with magical powers, living off the grid on a desolate desert planet in self-imposed isolation, but keeping an ever-watchful eye on the last hope, a young Luke Skywalker, who will eventually rise up to take down the Galactic Empire and its twisted leader, Darth Vader.

As Star Wars’ second act comes to close, Obi-Wan sacrifices himself, telling Vader that in the afterlife, “I shall become more powerful than you can possibly imagine.” And so it is with the former New York City mayor, the ninth richest person on the planet with a cool $55 billion to his name, now hell-bent on putting out the dumpster fire burning at 1600 Pennsylvania Avenue.

“By putting aside his own presidential ambitions, the former New York City mayor is now much more powerful than had he decided to run,” noted Fox News analyst Ethan Bearman. “By taking himself out of the mosh pit of Democrats throwing elbows at each other, each in the hopes of maybe hitting double digits by the time of the Iowa caucuses, Bloomberg has now adroitly put himself above the fray and positioned himself, as well as his political and data mining operation, to do what he did very effectively in the 2018 midterms—and that is to wreak havoc on Republicans. Mike Bloomberg is determined to sweep Donald Trump into the dustbin of history.”

While some voices actually lauded Bloomberg’s decision not to run as one of putting country before self, much of the mainstream media buried the real lede—that an active billionaire with an army of skilled political operators and a bevy of high-tech machinery that can probably parse data better and faster than Facebook, is a juggernaut that must have the White House on edge.

Even if he had been able to emerge as the victor in a crowded Democratic primary, Bloomberg would have taken a lot of friendly fire from fellow Democrats in the process. Party progressives, like declared presidential hopeful Senator Elizabeth Warren, were clearly getting ready for a Bloomberg presidential bid, telling MSNBC’s Rachel Maddow that the presidency shouldn’t just be “one more plaything that billionaires can buy.” She went on to suggest that Democratic candidates should “link arms” with one another to keep self-funded billionaires out of the Democratic primary—clearly a shot aimed at Bloomberg.

But with Bloomberg out of the race, he will be unabated by fellow Dems and free to rotate his gun turrets and point them squarely at the man he considers “a threat to our country,” softening up the president in key battleground states, while Dems duke it out among themselves in the primaries.

While Trump has the Russian Internet Research Agency in his corner, now the Dems have Bloomberg, the guy who brought global financial markets into the modern age. It’s as if Trump thought he was the smart guy by bringing a gun to a knife fight only to discover that the Dems showed up with an RPG-7.

“In many ways, the biggest loser from Mike’s decision not to run is actually Trump. In a primary, who knows what would have happened? Mike probably would have lost and come out battered,” observed Brad Tusk, the former steward of Bloomberg’s successful 2009 mayoral re-election campaign. “Now he’s like Tom Brady coming off a bye week: unlimited resources from his wallet, unlimited support from everyone. If you are Donald Trump, now you have to contend not only with the nominee, but with the Bloomberg machine which will outspend you, outsmart you and outmaneuver you. That’s gotta be very scary.”

In his opinion piece published on Bloomberg.com, the former mayor wrote that, “Last fall I spent more than $100 million supporting Democrats in the midterm elections… In the weeks and months ahead, I will dive even deeper into the work of turning around our country, through concrete actions and results. And I will continue supporting candidates who can provide the leadership we need—on climate change, gun violence, education, health, voting rights, and other critical issues.”

In other words, even though Mike Bloomberg will not be headlining ham dinners at local Democratic clubs across Iowa over the next 12 months, his impact will be felt across the country in a way that will clearly tilt battleground states in favor of Democrats. Obi-Wan Mike Bloomberg won’t rest until the evil empire has been defeated, and democracy across the galaxy—or at least across the United States—has been restored. 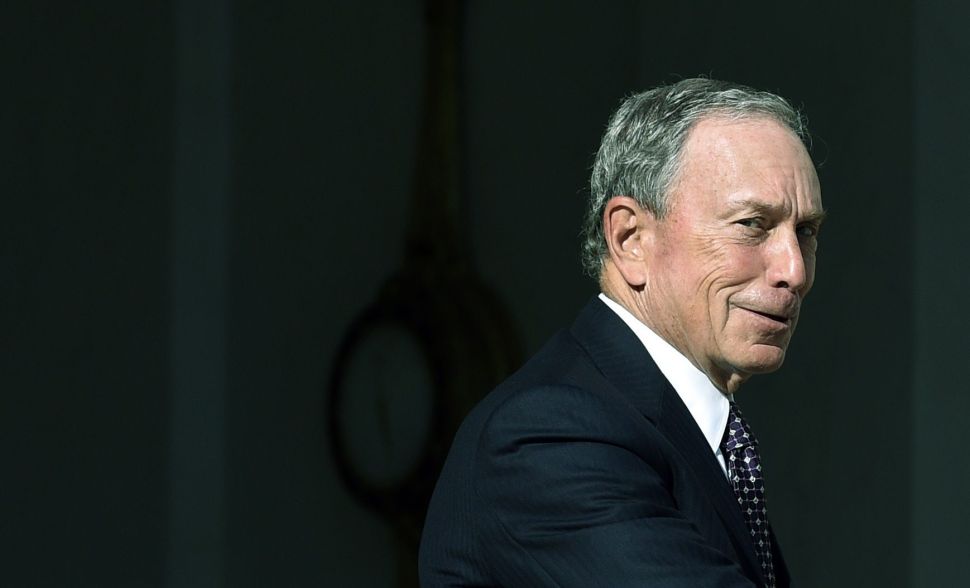