From the Korean Peninsula to the Indian subcontinent, and maybe Russia, there are a number of weapons disputes about to go nuclear. It falls upon the shoulders of President Donald Trump’s second Secretary of State Mike Pompeo. Is he up to the task? And what can he learn from his predecessors?

Believe it or not, it’s been tough for the U.S. Secretary of State, going back to the days of George Washington. It’s easy to think that early top diplomats like Thomas Jefferson, Edmund Jennings Randolph and John Marshall had little to do but sign treaties and push for diplomatic recognition. But powerful countries like Great Britain and France could have destroyed the new North American country with their armies and navies. We nearly discovered this during the undeclared war with France from 1798 -1800 and the War of 1812 with Britain. Only our plucky navy and their excellent captains, crews and ships saved our country.

Today, the big threat is nuclear weapons. Nukes enable a weak and backward state like North Korea to become an international player and a credible threat to the U.S. And even when the United States isn’t directly threatened, a nuclear exchange between Pakistan and India would generate a lot of environmental destruction that would harm all counties, including the U.S. The next question is what can Pompeo could learn from his predecessors.

How Other Secretaries of State Either Succeeded or Stumbled

Secretaries of state used to be such a dominant force in politics. It used to be a stepping stone to the presidency: Thomas Jefferson, James Madison, John Quincy Adams, Martin Van Buren, and James Buchanan all served as State Department leaders before occupying the White House, though none have done so since before the Civil War. Hillary Clinton was close.

That’s because “you can’t leave it up to State” anymore, according to foreign policy expert Jerel Rosati. That’s why we have national security advisors, CIA directors and a host of other positions that care about external affairs and compete for the president’s attention and agenda, as well as a piece of the foreign policymaking pie.

A Secretary of State can get buried in bureaucratic politics. Just ask William P. Rogers. His exhaustive shuttle diplomacy strategy for the Middle East was undermined by National Security Advisor Henry Kissinger, who had his own agenda. When Kissinger was elevated to Secretary of State, the academic had his own internal troubles with neo-conservatives.

Sometimes it’s not a bureaucratic battle that undermines a Secretary of State. America’s relationship with its own allies can be troubling, as Ronald Reagan’s first top diplomat Alexander Haig discovered. His credentials were great, perhaps too great. Many felt that Haig had been running things during Richard Nixon’s second administration, but that turned out to be a bit of a liability. This was especially the case after Reagan was shot, and Haig famously announced that “I’m in charge here.”

It wasn’t just that incident which undermined Haig. There’s the case of the Falkland Islands conflict, which pitted America’s Rio Pact ally Argentina against its NATO ally Britain. Haig engaged in high profile “shuttle diplomacy,” weaving back and forth between the two countries, ultimately unable to stop the two from fighting in the South Atlantic.

His best moment was captured in the film The Iron Lady, when he memorably sparred with British Prime Minister Margaret Thatcher.

“So you are proposing to go to war over these islands. They’re thousands of miles away, a handful of citizens, politically and economically insignificant, if you’ll excuse me,” Haig lectured. “Just like Hawaii… I imagine,” Thatcher wryly smiled, knowing she had won the argument.

It turns out later that Haig was also leaning towards the Argentines in that dispute. It was nothing personal, but his mentor Henry Kissinger often preferred creating a balance that would help the weaker side, to preserve the peace. Haig later resigned after an overly-ambitious West European tour that taxed Reagan’s strength too much.

What Can Secretary Pompeo Do?

The 70th Secretary of State Mike Pompeo has his work cut out for him. To avoid the mistakes of the past, he needs to be on good terms with his fellow advisors, and not just President Donald Trump. That means working well with the new Acting Secretary of Defense Patrick Shanahan, as well as National Security Advisor John Bolton, hearing both out on concerns over North Korea, as well as withdrawals from the Middle East.

Already, this has paid dividends as Trump has walked back a proposal to leave Syria, both to defeat ISIS and maintain good ties with the Kurds, one of our few Middle East friends. At the same time, the Trump-Pompeo team showed they were not so desperate for a deal with North Korea that they would make a bad one. This may help in economic negotiations with China, as well as produce a better agreement with Kim Jong-un in the future.

Moreover, when it comes to allies who fight each other, like India and Pakistan, it’s important not to “tilt” toward the weaker side just for the sake of some vague notion of “balance.” Kissinger and Haig would have favored Pakistan, as they did in the 1970s, despite that regime’s authoritarian tendencies then. Haig should have never preferred the ruthless undemocratic Argentinian regime against democratic, free market Great Britain in the 1980s. In fact, Britain’s defeat of Argentina hastened the demise of that bloody military junta, ushering in a more democratic government in our Southern ally.

Much in the same way, Pompeo must lean toward India, our democratic ally, instead of the less stable Pakistan, whose failure to rein in terrorist groups started the whole dispute, which led to an aerial duel. Knowing that we have their back, India’s Hindu Nationalist leader Narendra Modi can take a calmer approach, instead of a belligerent tone that could escalate to a possible nuclear confrontation. And Pakistan should be praised for returning the pilot and rewarded for an eventual crackdown on terrorism which should be forthcoming.

Sure that’s a tall order, but that’s diplomacy, right? And if Pompeo wants his place among the historically successful Secretaries of State, he’ll pull it off, keeping these hot spots from going nuclear. 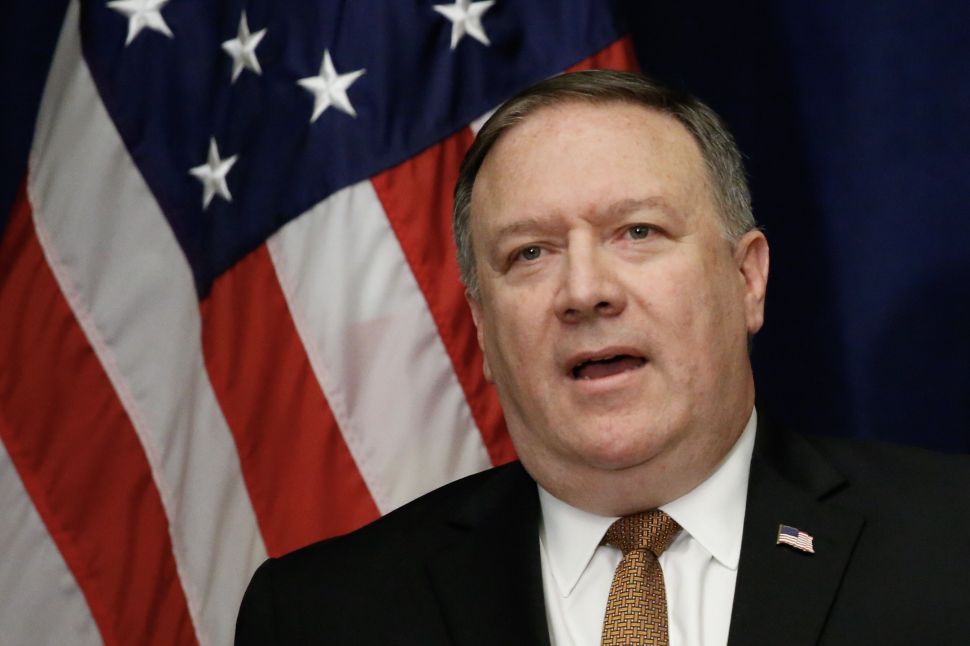