As a kid, I was never a follower of the adventures of teen detective Nancy Drew. The Hardy Boys were more my speed. But I have breezed through some of the old books by the author Carolyn Keene that have been delighting legions of readers for 75 years. And I have seen all four of the Nancy Drew movies in the entertaining 1938 to 1939 Warner Bros. series starring brainy, charming Bonita Granville as Nancy and Frankie Thomas as her loyal, long-suffering boyfriend and fellow problem solver, Ned Nickerson.

Pristine prints of all four films have now been released in a home-video box set on Warner Home Video. I urge you to grab it while supplies last, and do everything in your power to avoid a pitiful attempt to bring back the popular 16-year-old sleuth in a deadly bore called Nancy Drew and the Hidden Staircase. Ineffectual, irrelevant and amateurishly conceived from start to finish, this movie is so bad it could kill off Nancy Drew forever.

So loosely based on the fourth and final entry in the old series that any similarity is purely coincidental, this version trashes everything that once made Nancy Drew movies fresh and appealing, beginning with the plot. The 1939 version found Nancy trying to save two elderly dowager sisters in a creepy old mansion set upon by ghosts with a sinister motive for driving them away before their inheritance was due. It was up to Nancy and Ned to find out why, and make sure the money financed new building improvements at the high school, as promised. A series of hair-raising close calls ensued, including a few murders and a near drowning in a secret tunnel beneath the house that was quickly flooding with .

Trying to bring the story up-to-date, the people responsible for the fatuous froth currently on view have eliminated the plot for the sake of skateboards, cheerleader squads, laptop computers, social media and smart phones, with a new, incomprehensible reason for haunting the house with the hidden staircase—something about being in the middle of a new train route. The crumbling old mansion now has flickering lights and a yard overcrowded with plastic pink flamingoes. The two colorful old biddies are now replaced by—are you ready?—Linda Lavin (!), as “one sweet old lady” instead of two. The script tries to justify this hopeless bit of miscasting by making her a former burlesque queen who defines senility as “cheese sliding off the cracker.”

Instead of Ned, who never appears, Nancy’s two cohorts are a girl named Bess and her cousin, a girl named George. They cannot begin to replace Frankie Thomas as Ned. Sadly also missing (and missed) are Frank Orth as the bumbling town cop, Captain Tweedy, who was always being outsmarted by Nancy, and pickle-faced Renie Riano as the befuddled housekeeper, Effie.

OK, I know you can’t bring dead actors back to life to revive characters they made famous, but Nancy Drew and the Hidden Staircase doesn’t even try to approximate their humor and value. While feisty and enchanting Bonita Granville was a pluperfect centerpiece in the old Nancy Drew movies—fearless and dedicated to righting all wrongs—there is nothing charismatic or engaging about the new Nancy, played by peppy but blank Sophia Lillis, whose flaming, popsicle-red curls make her look more like Little Orphan Annie than Nancy Drew.

I must add, on Lillis’ behalf, there is nothing on the screen or going on behind the camera to make her Nancy look smarter and braver than she does. The acting throughout is mediocre, the direction by Katt Shea is lethargic, the screenplay by Nina Fiore is totally lacking in any kind of ingenuity. I fought the urge, but could not escape falling asleep several times. Since the film is woefully lacking in mystery and suspense, this is easier to do than you might think.

Since Nancy Drew has been pulling feats of teenage derring-do for 75 years of publishing, I figure, by my math, she’s now about 90 years old. This does not explain why her new pals have learned to use the words “like” and “awesome.” The ending hints at more sequels and re-makes to come, but don’t count on it. Instead of its intended target audience of teenage girls, Nancy Drew and the Hidden Staircase seems destined for the Lollipop Guild. 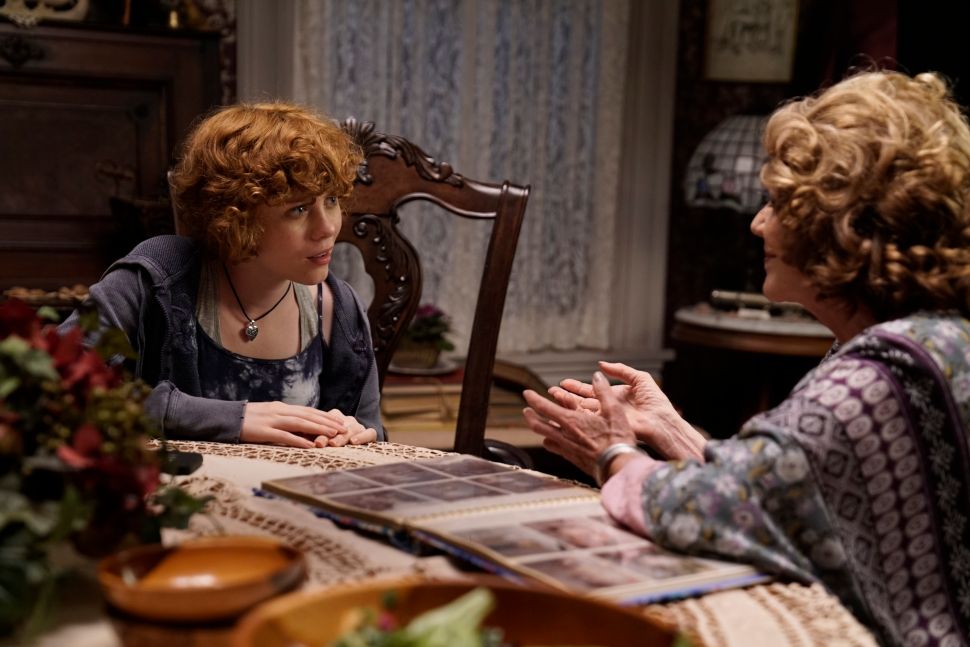