Unlike the Upper East Side or Midtown, the stretch of land beginning in the Gansevoort district and extending to Hudson Yards has no name—an indication of its relative unimportance up until now. The three neighborhoods that fill this space, the Meatpacking District, Chelsea and Hudson Yards, housed taxicab garages, trains and drug dealers thirty years ago. It was so unimportant, that until the 7 train extension to Hudson Yards was made, many city residents weren’t even aware of what it was.

Today, the High Line, a park built on an elevated freight line, connects these neighborhoods, which have been rezoned for residential and mixed-use buildings. It is a tourist destination that includes a host of commercial galleries known for regularly mounting museum-quality shows, the Whitney Museum of Art and the soon-to-open Shed, a $500 million city-sponsored arts center that will commission original works of art across all disciplines.

There are more parts to this transformation than can possibly be broken down, let alone connected. But what’s for certain is that the changes this area’s emergence as an arts district set in motion are now precisely what threaten its existence as a place where galleries can thrive. Its presence as a cultural destination might be cemented, but what does that mean for the art market? Below, we take a look at the elements shaping the future of the art scene on the West Side.

The Hudson-adjacent neighborhood that spans the blocks from 14th to 34th streets is nearly unrecognizable from the Chelsea of five years ago. What was once galleries and gas stations is now high rise condos and fancy private schools. Perhaps the only throughline over the years has been near constant construction and a less than welcoming neighborhood. As Austin Thomas, artist and Chelsea resident recently remarked, “New buildings are everywhere, but you still can’t get a cup of coffee.”

New York’s luxury developers have taken an Emirati-like approach to neighborhood building. The Chelsea gallery district remains a construction zone is peppered with starchitect condo developments and workers forced to occupy curbs and sidewalks on their lunch breaks. In The New York Times, Michael Kimmelman made similar observations the Hudson Yards, describing it as “Rashomon” in his review of the new development.

Galleries who invested in Chelsea early are cashing in. Andrea Rosen and Luhring Augustine Gallery made a 1,650 percent return on their conjoined 10,000-square-foot space, purchased in 1997 for $1.6 million, according to Bloomberg News. Many speculate Cheim & Read will sell their property, too. Meanwhile, over on West 21st, David Zwirner became a shareholder in a Renzo Piano-designed project developed by Casco Development Corp. “It used to be a gallery would sell their old masters in the back, or Leo Castelli [sold] old masters in the backroom and had Jasper Johns in the front room,” Thomas told Observer. “Now, you sell your condos in the back and your contemporary art in the front.”

Add that to an art dealer’s job, which wasn’t an easy one in the first place. In these neighborhoods, having the capital to invest in property early is basically a must for any hope of success. Now, some galleries are fleeing Chelsea because they can’t afford the rent, while others are simply leaving to make good on early investments.

Responding to critics who claim that galleries cashing in on their million dollar properties are selling out the artists and neighborhood, Sally Morgan, co-founder and owner of the Chelsea-based gallery Morgan Lehman retorted, “Who are you to say that they should stay? These guys, who have been doing this for 30 years and they still have to put on a suit and go sit there every single day at the gallery and answer questions like ‘Where’s Gagosian? What’s the closest entrance to The High Line? And do you have a public restroom?’ This is ridiculous.”

Tourists who once walked the streets and browsed Saks Fifth Avenue, Tiffany’s and Bergdorf Goodman for its proximity to wealth now get their luxury fix through galleries. One might liken the High Line that transports these shoppers and leisure seekers to their sought after cultural experiences to the Fifth Avenue of old. But Thomas believes another type of road might be a better fit. “It’s like the i-405,” she told Observer. “It’s convenient, but you have to drive on it at three in the morning. [The High Line] has a soul, though, which is really what we’re talking about in Chelsea. There are fewer spots where that exists”

Is there a relationship between galleries diversifying holdings, a boom in luxury real estate condos and the health of high-end art sales? None, according to the experts I spoke to, though everyone agreed that the diversification of revenue streams helps grow any business and reduce exposure to risk. Jonathan Schwartz, the founder and CEO of the art shipping company Atelier 4, cited MoMA’s Museum Tower as a notable example. “If I remember correctly, the revenue stream from selling these residential condominiums to extremely high net worth individuals was supposed to create free admission to the museum. That never happened, by the way.” Observer was unable to source MoMA’s promise, but the museum does offer perks to residents, including unlimited free admission and three catalogs.

Jonathan Lavoie, a licensed real estate agent at Stribling, and former art director at  I-20 gallery dismissed the comparison entirely. “I don’t see the proliferation of luxury real estate condos happening here is a sign of luxury art market sales going up. I think that’s more a product of work and the years that the galleries were in these submarkets building up the values. The galleries either cash in on that, stay because they built an internationally recognized art epicenter, or leave if leases go up too high. Then there’ll be a new frontier—and that’s what I’m interested in.” 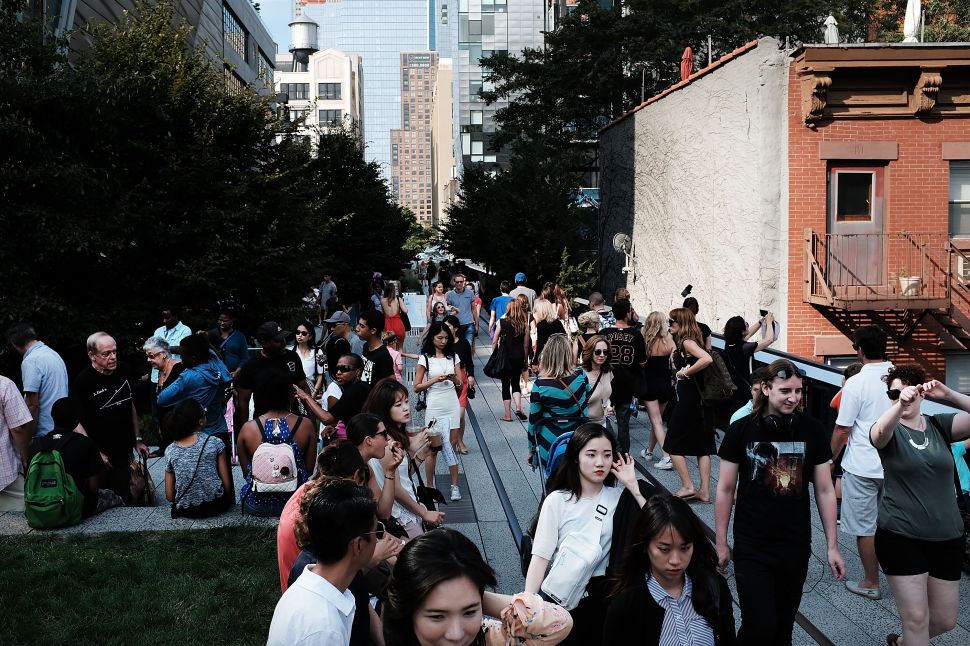