In addition to her talent for moving into every role she plays with overwhelming honesty and dedication, Patricia Clarkson, one of the most versatile and unjustly under-valued of today’s actresses, also has a regrettable talent for choosing terrible movies. It’s good to see her in a leading role for a change, dominating every scene, but it’s bad to watch her fritter away all that abused ability in a dog called Out of Blue. Maybe she did it for an expense-paid trip to New Orleans, her home town. But for one of America’s most unique and photogenic locales, the Crescent City is as wasted as Clarkson—so boring to look at that the whole movie could have just as well been shot in Toledo, Ohio.

The star plays a jaded homicide detective and recovering alcoholic named Mike Hoolihan, tough as her name and twice as glum. The case she’s on is the murder of an astrophysicist and leading expert on theories of the “black hole.” Who blew her head off? Among the suspects: the victim’s fellow scientist (Toby Jones), parents (James Caan and Jacki Weaver), two brothers, ex-boyfriend (Jonathan Majors) who believes in parallel universes and a serial maniac called the 38 Caliber Killer.

For a while, it’s nothing more than an odd, unconventional crime thriller. But the more the cop delves into the dead woman’s notes and lectures, the weirder it all gets, sinking finally into a metaphysical morass of mumbo jumbo that only succeeds in slowing down the tempo and distracting from the criminal elements. Instead of sleuthing, the detective is more focused on the mysteries of the planets.

The threads that link the connective tissue between clues are long, demented excerpts from the lecture the corpse delivered the night before her murder. “We do not simply live in the universe; the universe lives within us. The catastrophic death of a star brings new life to the universe. In order for us to live, a star must die. We are all…stardust.” Meryl Streep’s daughter, Mamie Gummer, delivers all of this bilge in flashbacks like she knows what she’s talking about, although nobody else does.

The dialogue, written by director Carol Morley, is as fruity as a can of fermented peaches: “can you explain your place in the universe? Most people can’t get out of New Orleans, Louisiana, and spend their lives trying to get to the heart of this dark energy.” Take it from an expert. The minute you arrive in the New Orleans French Quarter you are smack in the middle of “this dark energy” and you know exactly what your place in the universe is as you order another jell-o shot and head for Bourbon Street.

So nothing about the film’s pretentious musings on philosophy, physics, astronomy and the mystery of the detective’s own past, which she seems to have forgotten completely, makes one bit of sense. By the time it ends, there is evidence that she might even be the killer herself.

The anesthesia that erupts from Carol Morley’s screenplay, vaguely based on a dreadful 1997 novel by Martin Amis called Night Train, induces instant torpor, and she doesn’t have a clue what to do with her actors. There is no chemistry between any of them. Clarkson has given many memorable, invigorating performances in the past, but in Out of Blue she goes through the motions of a hard-boiled cop with charmless brunette hair, off-the-rack clothes and convincing detachment like someone who is constantly being rudely interrupted from a long nap. 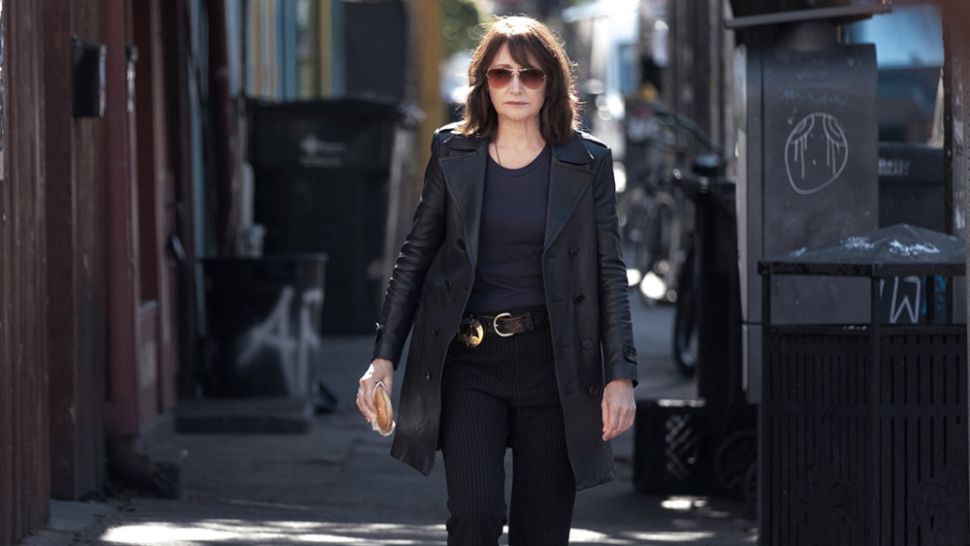