Canadian painter Drew Simpson used to live in Berlin, until he was diagnosed with diabetes. Instead of being given antibiotics for a chronically infected limb, he was scheduled for an amputation. He sensibly returned to Canada where he could navigate the health care system more easily, and with potentially fewer drastic measures.

Four years later, Simpson is now very much on the mend and presenting his first Toronto solo show in over a decade, works made during and about his life-altering health crisis. Of course, this being Simpson—a Royal Bank of Canada Prize finalist and beloved curmudgeon famed for his madly detailed, visceral yet dreamy images—the works on view at Katharine Mulherin contain plenty of other things too, from art history nods and pop culture winks to animist symbolism and naked people, plus plenty of hot, lurid colors.

“Well, I’d say the new series of work is comically nightmarish, as the situation I found myself in was exactly that,” Simpson told Observer.

“After landing back in Canada from a seven-year stint in Berlin I found myself bound in two leg casts with an IV pic line running up to my heart, while on welfare and living in the back of a mechanics garage off a small rural highway. You can’t make this shit up man! The narrative in the new works is autobiographical with a fairy tale twist. I was thumbing my nose up at the situation by making it fantastical and using an illustrative style to defy death’s agency.”

The human body and its many stages have always been entwined with the history of art making, because humans inhabit bodies while they make art. But Simpson is averse to readings of his work that posit exact parallels with his health. He’s a better artist than that. And way too cranky.

“I’m hardly disabled, though all my ex-girlfriends would say I’m definitely emotionally stunted. I’m not saying I don’t appreciate the free front parking space at the mall, but there’s weakness in embracing weakness.”

People who are unwell face enormous pressure to remain positive, or at least to front positivity. But of course resentment and anger, even fury, will out, and the startling changes in Simpson’s body are not something Simpson cavalierly disregards. Nor is he unaware that his harsh views on the art world—views most cultural workers, including myself, do not share—are driven by rage. The exasperation is embedded in the work.

“I’ve found that that’s the silver lining in this whole fiasco. I’ve had nothing but years to sit, think and paint. But the devil’s in the details, so you also have nothing but time to sit and feel sorry for yourself. The isolation has been brutal, during the roughest years a typical week consisted of five days without any verbal communication with anyone. The people in our communities with disabilities can be crippled more by social exclusion than their actual physical ailment.”

Practical concerns are in play too. Simpson is at a point many mid-career artists will recognize: the time when your body begins to lack the strength of your ambitions. Thus, Simpson’s new work marks a pivotal point in his career.

“Yeah, unfortunately going forward, all my work will put me in a ‘damned if you do, damned if you don’t’ scenario. These new pieces were definitely hard on my body as I had to stand to paint them, which was a new experience for me. All the years before I was able to sit comfortably, but I was damaging my eyes by making tiny paintings. I’m hoping (and it sounds catchy as hell while I’m saying it in my mind) that learning to adapt physically will help me learn to surpass obstacles creatively.”

In an age when emerging artists are told to “monetize their misery” (a phrase a young writer recently told me is the mantra repeated by his professors), Simpson is, true to form, bucking the call. Which is one of the reasons this interview exists: as much as I disagree with plenty of Simpson’s views (on public funding for the arts, for instance, which he describes it as the making of a “controlled opposition”), I recognize that the art world is as diverse in its world views as the rest of society.  So, while Simpson’s new works are inspired by the trauma of having a dangerous illness, don’t put Simpson in a corner.

“We live in a society that encourages victimhood circle jerks, but this whole situation has only made me a better artist; its robbed me of some mass but granted me some flight. I hear from a lot of other artists how they’re perplexed by their constant stagnation, and I’ve noticed they all have one thing in common, they’ve never suffered for their craft.”

That seems a bit extreme, even for Simpson, but he continues.

“Come on, we all know that sort of artist. They live comfortably, supplementing their income in other ways, enjoying residencies in Iceland, relying on grants to make their work. Its art built on a soft foundation of fluff, but inside the down has rot and there’s no progression.”

To be fair, Simpson is keenly aware that his anger over the state of his health leads to outbursts such as the one above. “Like most artists, each stage in my career came with its own unique challenges,” he says. “This challenge is nothing to write home about.”

Making art is hard work. Living with ability issues is very hard work. When these two realities collide, not taking into account the inherent fragility seems foolish. Simpson’s new works strike a vivid, intentionally wonky balance; a see-saw act evident in his mash up of painterly styles. At times pinpoint exact (and exacting), while at other times loose and even (again, intentionally) fluidly casual, the new paintings are both startling and rudely funny. Much like talking to Simpson.

“Comparatively, this is my least detailed work to date. If anything, painting this series is a good exercise in learning how to say more with less. And, yeah, this new series is also a full on, existential pity party, pay per view Battle Royale.”

Doesn’t that contradict what he says about victimhood?

It does, he acknowledges. But perhaps we can forgive him his apparent (stress apparent, Simpson is actually a rather nice man) shock-jock persona given that he is not just making art about suffering, he is suffering.

“Diabetes can go fuck itself!” he tells me, encapsulating both his disappointment and obstinence.

One wonders if any disease, or a steamroller for that matter, would stop Simpson from being his cantankerous self.

“I couldn’t be more painfully bored with seeing an artist show me their body or tell me what pills they’re on or what kind of P.T.S.D. they have. Though, I’m embarrassingly aware that this article is pretty much exactly what I’m rallying against!” 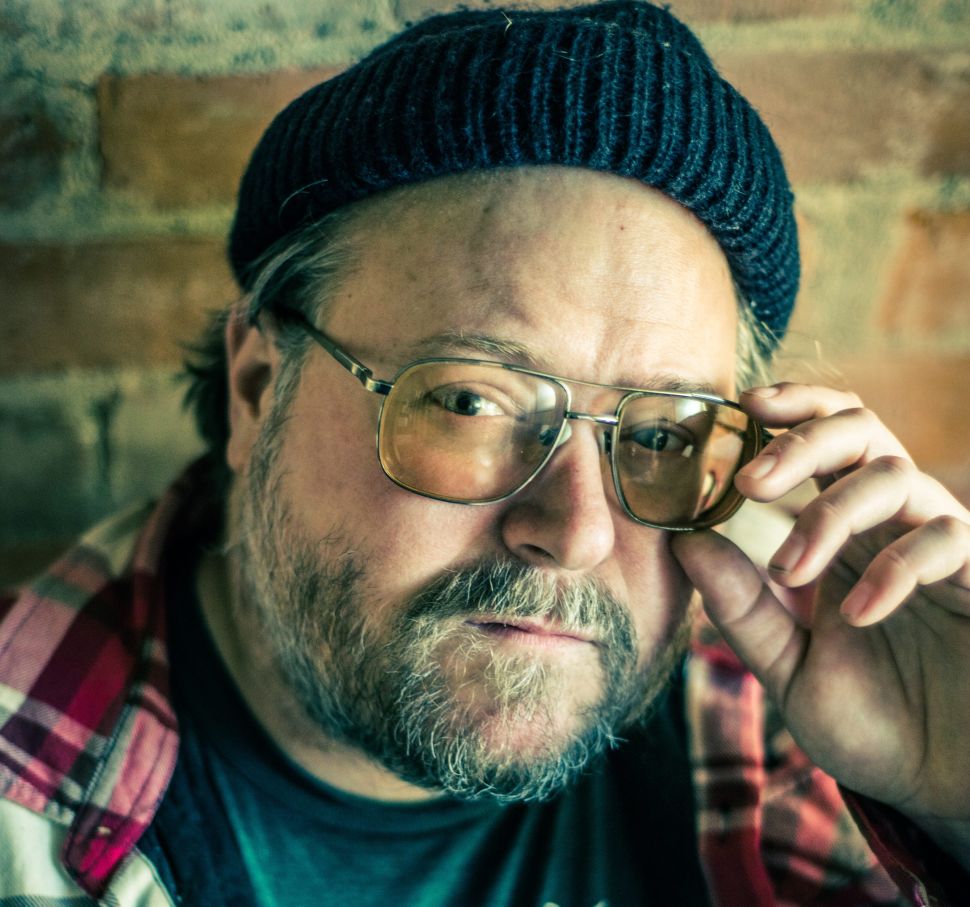