It’s almost time for the yearly excursion of flower crown-loving Coachella-goers to make their way to the desert. Coachella Music Festival now takes over two srping weekends (April 12 to 14 and 19 to 21), because there’s just that much interest in running around Indio decked out in a crop top and covered in glitter, with some member of the Kardashian-Jenner clan in the vicinity. While many Coachella attendees might be content with camping out for the excursion, why not treat yourself to a relaxing and also not dirt-filled stay at a chic Palm Springs hotel? We found the best spots for a luxe Palm Springs trip that doesn’t even have to involve Coachella—below, see our top picks.

La Quinta, a 45-acre resort, is the largest option, with 781 rooms that range from 400-square-foot casitas to the 2,000-square-foot one-bedroom El Presidente Suite, which has its own private yard, pool, hot tub, living room and an adjacent one-bedroom guest house (for any Coachella crashers). The historic resort is also one of the oldest in Palm Springs, dating back to 1926. Now part of Waldorf Astoria, the hotel is one of the stops on Coachella Festival’s line shuttle, so no need to worry about getting stuck or waiting around for your Uber. There are seven restaurants to choose from for all your dining needs, as well as 41 pools (that’s including private villa pools) plus Spa La Quinta, where you can book a treatment for some much-needed refreshing post-festival. From $400, La Quinta.

The 25-bungalow hotel was originally built in 1952, but received a multimillion-dollar renovation and reopened in 2015 as a luxe member of Leading Hotels of the World. Spread out over three acres, L’Horizon only allows guests 21 and over, so no need to fret over any overzealous teen Coachella goers. All the bungalows at the boutique spot are semi-detached, so it’s like having your own house and grounds. A few boast private patios and outdoor showers, while all are decked out with Frette sheets and Le Labo bath products. The hotel also offers an entirely al fresco restaurant, SO•PA, as well as a spa and Le Shop, where guests can peruse designers like Tom Dixon, Mikoh and even more Le Labo. From $620, L’Horizon.

Villa Royale is a newer addition to the Palm Springs scene; it opened in October 2018. Provenance Hotels partnered with Lighting Bar Collective on the adults-only hotel, which is positioned on 3.5 acres. All of the rooms are Mission Revival-style, with mahogany and midcentury details, plus vintage furniture—it’s all very post-war-inspired. At the moment, there are 31 rooms, all of which are located in the main complex, but another seven are set to open up later this year, inside a separate annex called Villa Rosa. There are two pools, as well as a new Mediterranean-style restaurant, Del Rey. From $425, Provenance Villa Royale.

The sprawling JW Marriott in Palm Springs received a major renovation last year, and is now composed of 774 rooms as well as 110 suites, all of which have views of Coachella Valley. The grounds include numerous waterways where you can jump on a gondola, along with other Insta-worthy ops like an actual flamingo island (apparently, everything in Palm Springs is pink themed), and five outdoor pools. There are also eight restaurants and an on-site nightclub, Costa, because why not? If you want to go all out, book the $729 Coachella package, which includes a three- or four-night stay, festival passes for your group and shuttle passes. From $719, JW Marriott Desert Springs Resort & Spa.

We recommended Sands Hotel & Spa for a fancy adult spring break trip, and we also think it’s an ideal place for a Coachella stay. The Moroccan-inspired Indian Wells hotel opened less than a year ago with 46 rooms and suites in an emerald green and millennial pink palette. It’s 21 and over, so there also won’t be any tween festival attendees wandering about. Try and get a reservation at the Pink Cabana restaurant, or spend some time at the new spa or perhaps by the pool, surrounded by many a blush-pink wall for peak Instagram content. From $299, Sands Hotel & Spa. 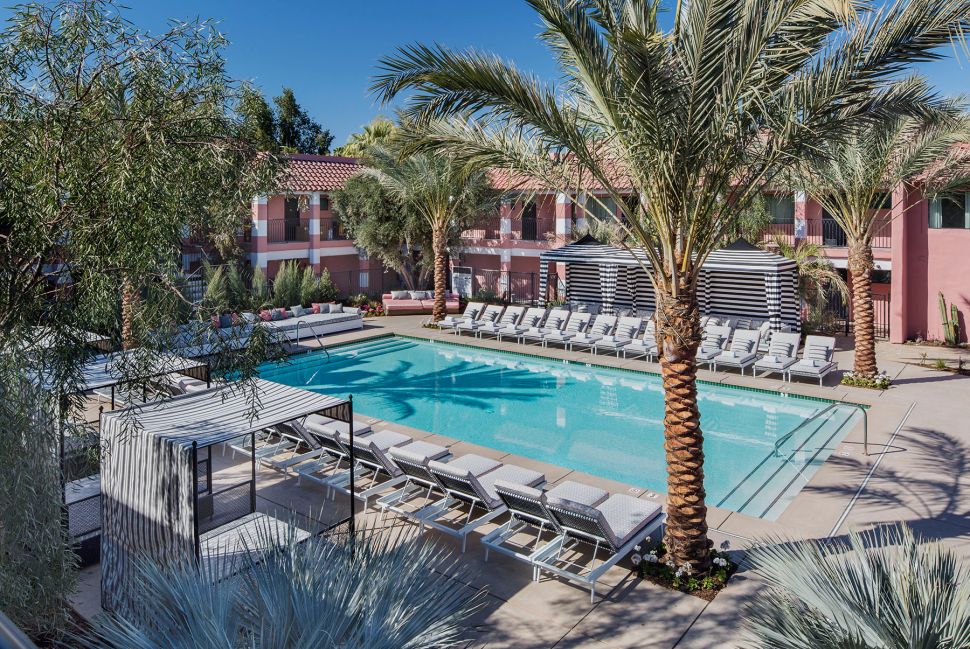