The past few weeks of You’re the Worst have cast some doubt over whether or not conjugal bliss is really in the cards for the FXX series’ beloved misanthropes. Gretchen has slipped into full panic mode, her mental health issues from the second season resurfacing in new and problematic ways. Still, even after coming clean to Jimmy about losing her job, stealing psych meds from their roommate Edgar (Desmin Borges) and feeling less than up to the task of planning their nuptials, she seemed like she might actually be getting her shit together. That is, until her mother (Rebecca Tilney) crashed her day of pre-wedding pampering.

In the wake of this week’s gut-wrenching, cathartic confrontation between Gretchen and her mom, Observer chatted with Cash about where things stand going into the series finale.

*Warning: Spoiler Alert for the Penultimate Episode of You’re the Worst.*

Observer: You’ve talked about not wanting to watch the final season. Have you bitten the bullet yet?
Cash: I’m watching in real time because I feel like even though I have them all, if I watch them now it’s over quicker, and I don’t want that. I’m trying to enjoy the last bits of having the show even though we’re done shooting.

In the past few episodes, Gretchen hasn’t been in great shape. Before starting the final season, what did creator Stephen Falk tell you about the fate of your character?
I can tell you exactly what we talked about, which was nothing. [Laughs.] Stephen doesn’t include us in the writing process at all, so we read the scripts as if we’re fans—except for Season 2. When I read the “crying in the car” episode, he gave me a heads-up about the depression arc. He really doesn’t tell us anything until we get the scripts. So, I knew nothing going in. When you really and truly trust the writers, it’s a relief. You trust someone to do their job, and then you come in and do your job.

Does not knowing what she’s about to go through make it harder for you to play the character?
Not really. Again, when there’s something super necessary, then [Stephen] tells us. We shot one of the flash-forwards the first day this year, and obviously I’m like, What’s going on? So, he told us. We were told what was gonna happen—how things were gonna end. This year we did actually know what was up, but only once we started shooting.

This week’s episode was probably the roughest episode of the show. Period. What was it like reading Gretchen’s scenes with her mother for the first time?
I think all these big life events—getting married, having kids, moving in—they’re big signifiers of adulthood. They’re tough. There’s a lot of societal pressure around them. Gretchen has to confront her mom so she can be an adult. I mean, we all have to separate from our parents at some point. And this is the way Gretchen becomes a grown-up.

I think for everyone I know, including myself, when you separate from your family, when you decide to make your own family with your partner, that’s a really tough transition for everyone involved—even in the most healthy dynamic. Mother-daughter relationships are notoriously tough, and Gretchen and her mom’s is held together by ticky-tacky. There are some really wonderful moments, and while we may not feel like, Wow, they really worked that out, we do get moments where her mom acknowledges who Gretchen is and says, “I actually do see you.” And that’s a surprise to Gretchen, because sometimes when you think you’re managing someone else’s expectations of you, you think you have it all under control. And then you realize, Oh, there are some things that have gotten out without my knowledge. She knows more about who Gretchen is than Gretchen expects.

Of the litany of Gretchen fuck-ups, were any of them outtakes?
No, because we don’t improv! We’re such a different show from most comedies. In most comedies, you’d see a total improv or writers running in with alt lines. But there’s very little improv and very few changes on set by the writers once we’re there.

After coming clean to Jimmy and hashing things out with her mother, Gretchen seems… better. How is she doing going into the finale?
I think she’s good, but she’s human. She’s still struggling with all the things she’s struggling with. What I appreciate is how her mental health was dealt with. Just because it’s fixed for now doesn’t mean it’s fixed forever, and I think you can sense that going into the finale. Maybe that was a step forward, but she also stepped on a giant piece of glass and cut her foot open. The moment you think you’ve got it and everything’s taken care of, the bottom often drops out. I feel like people will have a sense of optimism but also foreboding going into the finale.

A different show might have said, “We’ve dealt with Gretchen’s depression. Revisiting it will feel repetitive.” But this show recognizes that you’re never “cured.” Whatever is going on with her, it seems different from her Season 2 depression.
I just go back to the writing. The writing shows you how to play it. The writing told me it was different. She’s obviously not in a catatonic, dead-eyed state like she was. It’s a little more manic. She also has a few more tools even if she’s misusing them. So, she’s just in a different place, and the truth is that all that stuff morphs. If you have OCD and you take care of one obsessional thought, another one pops up. You fixate on something else. It’s not like every depressive state or every manic state looks the same. They’re all their own unique flowers, recognizable as the same species, but not necessarily the same colors or… genus?

Edgar basically begs Jimmy not to marry Gretchen. If Jimmy was your friend, would you give him similar advice?
No, because I’ve learned my lesson! I remember telling my high school best friend, “Don’t date that guy who’s cheating on you.” They stayed together for five years, and I lost a friendship. As much as you want to, it never goes well for the messenger. And just because Edgar says it and [Jimmy and Gretchen are] fucked up doesn’t mean Edgar’s right. She is a mess. He is fucked up. But it doesn’t mean that Edgar’s right that they shouldn’t be together.

It feels like what Gretchen’s mother says to her about Jimmy not pushing her and accepting her flaws is the tip of the iceberg, and what Edgar says to Jimmy is everything that’s beneath the surface.
They’re both right, but we’re talking about two people who are sort of unsuited for anyone else. I think the thing that comes to a head in the next episode is the fact that they have been hiding things from each other and that’s not gonna work. But once it’s all out, they’re both going into it with open eyes, and that’s all you can do.

When you think about You’re the Worst in the future, will there be a moment from the series that always comes back to you?
I’ll remember Sunday Fun Day from all the seasons—it was always so fun for us all to be together. And the episode where I follow the couple [Season 2’s “LCD Soundsystem”]. Basically, whenever we see Gretchen really outside of the dynamic we’re used to. I really enjoyed the moments where she sort of steps out and is seen by the outside world and has to adapt. She has this desire to be liked and repulsion when she gets what she wants.

I noticed you’re wearing your hair shorter now. Is it for a role or were you eager to look different from Gretchen now that you aren’t playing her?
It’s a couple of things. Women often cut their hair after a breakup, and this felt like a breakup. I didn’t want it to be over, so it’s kinda like I got dumped. In a beautiful, very respectful kind of way, but still dumped. But it’s not about separating myself in any way. It’s not like I don’t want people to think of me as Gretchen. It’s just nice to change. I used to shave my head, dye my hair pink. When you’re on a show, you’re required to look a certain way. I had to ask permission when I cut my hair after Season 2. I made the argument that Gretchen was coming out of this depression and that it would be a natural place for this to happen.

You’re the Worst sounds like it was an experience that will stay with you. Do you think you’ll think about Gretchen years from now and wonder what she’d be doing?
No, I don’t. Even with my favorite shows, I don’t think of my favorite characters in that way. I don’t think of Tami Taylor [Connie Britton’s character on Friday Night Lights]—like, What happened to her? It’s just not how my brain works. Because on this show we were all so in the dark—it was like, I’m going to be told what happens and it’s going to be good. So why bother thinking, What if she did this? Usually my ideas were much shittier than Stephen Falk’s. 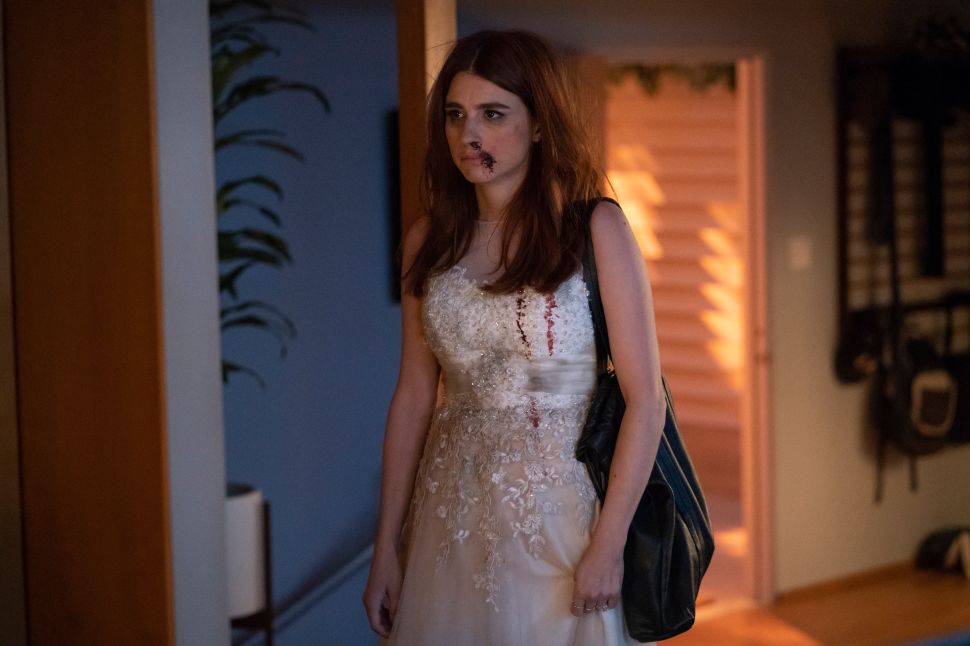