If there’s one main flaw that has prevented Saint-Saëns’ voluptuous Samson et Dalila from joining the ranks of A-list operas like Carmen and Aida, it’s the biblical piece’s lack of theatrical tension. In particular, the character of Samson has no real dramatic arc: he goes from hero to zero (and back again) mostly just because the libretto says so.

But the first night of the Met’s spring revival of this work (March 13) thrilled with an extra-operatic dramatic twist. After the first act, an audibly ill tenor Aleksandrs Antoņenko was put out of his misery, and the veteran artist Gregory Kunde stepped into his sandals for the remainder of the evening. His confidence and firm musicianship centered the performance admirably. This was, in fact, a crisper and more exciting show than we heard with the starry opening night last fall.

Kunde’s career stretches back to 1978, and he’s made very occasional visits to the Met since the spring of 1987, when he was one of a gaggle of tenors jumping into a new production of Manon opposite Catherine Malfitano. For decades he specialized in bel canto (his most recent Met appearances were in I Puritani with Anna Netrebko in 2007), and then, in his 50s, he transitioned into dramatic tenor repertoire like Otello and Enée in Les Troyens.

At age 65, the tenor wields a medium-sized voice with remarkably little wear and tear audible. If the middle register sounded rather plain, the climactic notes above the staff rang out with brilliant ping and (more to the point) absolute confidence. Firm high notes are always welcome, of course, but in this opera, Samson’s final high B has dramatic significance as well, symbolizing the renewed strength with which he demolishes the Philistines’ temple.

This note has defeated such Met superstars as Roberto Alagna and Plácido Domingo, but it held no fears for Kunde. What’s more, his singing for the preceding acts had such a quality of classical dignity that his final vocal ascent felt triumphantly inevitable.

But nothing overshadowed the Dalila of Anita Rachvelishvili. The mezzo was in stupendous voice throughout the role’s broad range, from a feral chest voice up two octaves to a sustained angry high B-flat that could stun from a block away. But the “wild” singing was reserved for climactic moments. Otherwise, Rachvelishvili seemed to keep in mind that Dalila was a noblewoman and a priestess on a mission to defend her people.

Or at least, that’s how her dramatic arc began. The mezzo imposed on her role a sense of growing doubt as her sympathy and love for Samson increased. Mostly this variation of the simple plot line made for an interesting and more complex character, though at times (in the context of Darko Tresnjak’s listless production) one wished this vivid artist had more varied stage action that just removing her priestess headdress.

It was most admirable for Rachvelishvili to modulate her massive voice for the opera’s more intimate, caressing music, but a couple of times I think she overdid the pianissimo. The lovely song “Printemps qui commence” finishing the first act sounded like she was marking and even the first phrases of her famous seduction aria “Mon cœur s’ouvre à ta voix” felt almost like she was humming for her own amusement.

To her credit, she was able to sustain the quite slow tempos set by conductor Mark Elder throughout the opera.

Tresnjak’s production hasn’t changed since opening night, though this time around I rather enjoyed the slithery go-go boys serving as acolytes of the pagan god Dagon. But my increased appreciation may have less to do with admiration for Austin McCormack’s choreography than it does with my stagnant dating life. 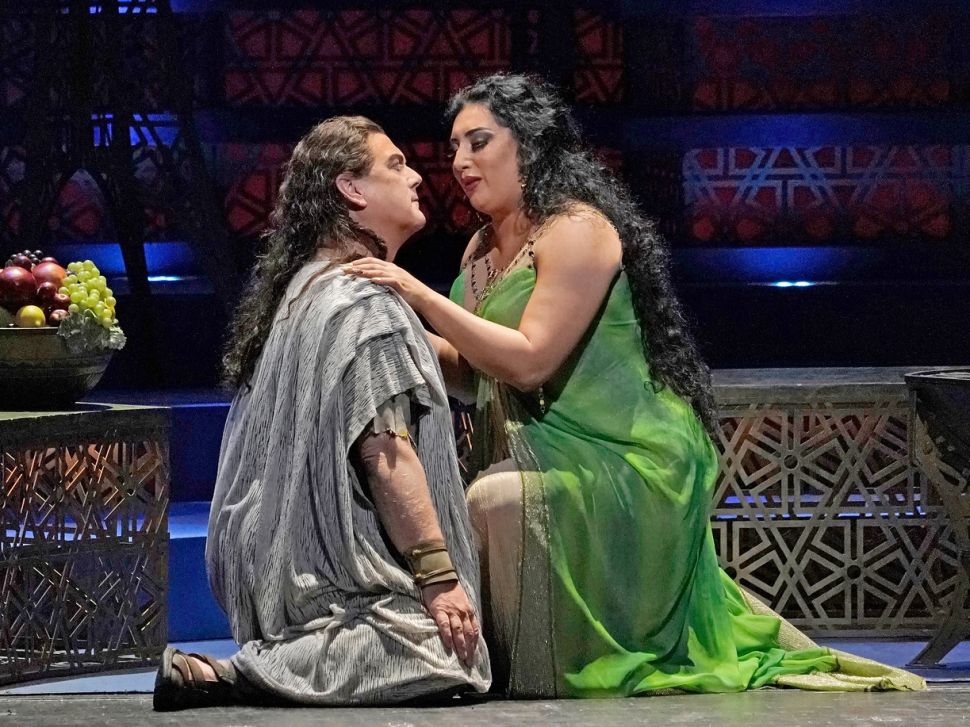