The spectacle of history repeating itself is usually less than edifying. See: war, famine, pestilence. But in the case of the new production of the Rodgers and Hart musical I Married an Angel, which opens a seven-performance run at City Center tonight, the idea has a certain winsome charm.

The original 1938 production was choreographed by the great George Balanchine, who at the time was in a relationship with Vera Zorina, the ballerina who played the title role. They actually married on-stage on New Year’s Eve during the show’s Broadway run.

Some 80 years, on, Joshua Bergasse is choreographing and directing a rare revival of the musical for the New York City Center Encores! series. The star? His wife, Sara Mearns, a celebrated principal dancer at New York City Ballet, essaying her first speaking role in a musical, and, naturally, like Zorina playing the titular celestial being, who descends to Earth and becomes involved in a relationship with a mortal. (Needless to say, she dances a lot, too.)

The historical echo is not entirely a matter of serendipity. As Bergasse recalls, Jack Viertel, the artistic director of the long-running Encores! series, approached Bergasse, who has previously choreographed Broadway shows including Charlie and the Chocolate Factory and the latest revival of On the Town, and suggested that he and Mearns should consider doing the show together.

“It was four or five years ago when Jack came to me,” he recalls. “He knew we were dating and he wanted to do this piece. He said something like, ‘Wouldn’t it be cute if you guys did this?’ And now, finally, it’s happening.” (It’s happening just as City Center, which was the first home to Balanchine’s New York City Ballet, celebrates its 75th anniversary.)

Bergasse and Mearns were married last fall, so their relationship does not precisely follow the contours of the Balanchine-Zorina connection relating to the musical, but both find a ticklish appeal in bringing the show back to life with a romantic echo. But they also recognize that the novelty in their collaboration is hardly going to automatically revivify the story for audiences today.

Despite their wealth of great songs, the Rodgers and Hart musicals—four of which were choreographed by Balanchine, beginning with “On Your Toes”—have not fared as well historically as the subsequent Rodgers and Hammerstein shows. They date from a period when the musical was transitioning from being more a free-form diversion into a musical play.

As Bergasse says, “It was 1938, a time when they were just starting to make sense of story and plot and how the numbers would help forward the plot. Then there are these giant dance sequences that have nothing to do with the plot.

“I loved that there was tons of dance in it,” he continues, including two ballet sequences of ten minutes or more—the “Honeymoon Ballet” and the “Snow Ballet,” which will give Bergasse a chance to pay homage to Balanchine (the original choreography has not been preserved). “But what drew me to it was also the sweetness of the songs and the comedy of the characters. The libretto is really funny. One challenge is how do we make it work 81 years later. How do we get the comedy to work and have people get the jokes?”

For Mearns, there were hurdles inherent in even assuming the role: Ballerinas don’t tell jokes, even if they might occasionally dance them. Mearns probably has as extensive a ballet repertoire as any dancer working today—and is inarguably among the most acclaimed dancers in the world—but she is virtually never expected to speak on-stage, or given the chance to. (Especially not in Balanchine ballets, which constitute the lion’s share of Mearns’ rep.) Merely learning to deliver dialogue in the ample auditorium of City Center posed a thorny problem, even with the aid of the amplification that is de rigueur these days.

“I have a very low register,” Mearns says, demonstrating it naturally, her voice a handsome, slightly husky contralto—one which might naturally translate to film or television. The show’s conductor, Encores! founding musical director Rob Fisher, immediately alerted her to the issue. “He told me, ‘Those microphones are not going to pick that up.’ When I’m in scenes I would be talking like I normally do. I have learned that I have to act like I am screaming even when I’m in an intimate conversation. I had to get into that space where it was OK to speak loud.”

Fortunately, the tight rehearsal schedule, a mere couple of weeks for what is essentially a fully produced Broadway-caliber show (the Encores! series, far scrappier and more informal when it began more than two decades ago, is now a highly polished enterprise), Mearns’ co-stars have been warm and helpful.

“The cast is very patient with me, they know this is the first musical I am doing and they are really supporting me. I can try things and mess up and they will be there,” she says. “And, really, since we are all in this together, they’re messing up too! We are all forgetting things. So in that way I feel not as scared.”

Bergasse notes that his cast has been impressed by the way Mearns has approached this new challenge. “One thing I keep hearing,” he says to her, “is the amount of humility you have. You are open to things. You are so established in your career, but everybody is so delighted at your openness to the process.”

Mearns says she welcomes the advice she’s been given: “I am so hard on myself anyway. I am my own worst critic, so when I need help I admit it.”

She did naturally draw some confidence from the knowledge that she was following in the footsteps—or donning the metaphorical pointe shoes—of another ballet dancer. “What was special to me was that Zorina was a ballerina. That settled me a little bit,” she notes. But what “excites and challenges” her, she says, are the varied aspects of the role that push her beyond her familiar aesthetic realms, not just to find her stage voice and create a character, but also performing tap routines, a throwback to her youth.

“This is storytelling dance,” she says. “And I’m playing a complicated character: this sweet, innocent, unknowing, unearthly thing that I sort of relate to a lot in the beginning. In Balanchine ballets I don’t feel like a woman, and I can tap into that really easily. But I liked that she has to change. She cannot stay the same.”

The musical’s plot traces the whimsical comic complications that result when the unhappy bachelor Willy (Mark Evans), a banker, frets that the only woman who could satisfy him would have to be an angel.

Enter the Angel, who must adjust to the peculiarities of humanity—primarily prevaricating as necessary, which apparently doesn’t come naturally to angels—with the assistance of, among others, Willy’s countess sister, played by Nikki M. James, a Tony Award winner for The Book of Mormon.

While the Angel and Willy meet cute—how could a mortal and an angel meet otherwise?—Bergasse and Mearns met through professional channels. Bergasse was the Emmy-winning choreographer on the short-lived Broadway-themed NBC television series Smash, which featured songs by Marc Shaiman and Scott Wittman, Tony winners for Hairspray. Wittman happened to be a rabid balletomane.

“Marc and Scott had written this fantastic dream ballet, and Scott was a big fan of Sara’s and suggested that she would be perfect,” Bergasse recalls. “I didn’t know who she was then, and wanted to meet her first, wanting to find out what this woman is about.”

“She was so delightful,” Bergasse says, “but the ballet was cut before we even filmed it.”

Although their careers moved them in divergent directions, Mearns soon decided to rekindle their nascent friendship. “I just thought, ‘I need to keep this up,’ and we met, and then he started coming to see me dance.

“One night he saw me in Slaughter on 10th Avenue, she recalls, referring to the climactic Balanchine dance from “On Your Toes.” “That night I turned him down for dinner. And I thought: That was the biggest mistake I ever made! Wake up! I reached out and we had dinner and that was it.”

They married in November in South Carolina. Now their relationship is finding new expression through their collaboration, as Bergasse choreographs and directs his first Encores! show and Mearns extends her range as a performer. For both, there was never much trepidation about working together so intensively, and the process has proven to be smoother than they could have hoped.

“I don’t know how Balanchine and Zorina worked together, but I just think it’s really fun to work with your partner,” Mearns says. “And if you respect them and collaborate with them then it really works.”

“I think it’s a huge advantage that we are as close as we are and we can really read each other,” Bergasse concurs. “I know when I can be helpful to her. We have that connection. I also know when to let her figure it out.”

Of course there was some initial awkwardness: “Acting in front of him is funny,” Mearns says. “I remember thinking, ‘This is so weird, I have to kiss someone else five times in the first scene!’”

“I thought the same thing: That’s weird!” Bergasse chimes in. “But then you become used to it.”

And, Mearns underscores, their collaboration is just part of the whole that is the production. Despite her central role in the show, she says, almost with a smiling sense of relief, “I’m not the only person in the room he has to worry about.” 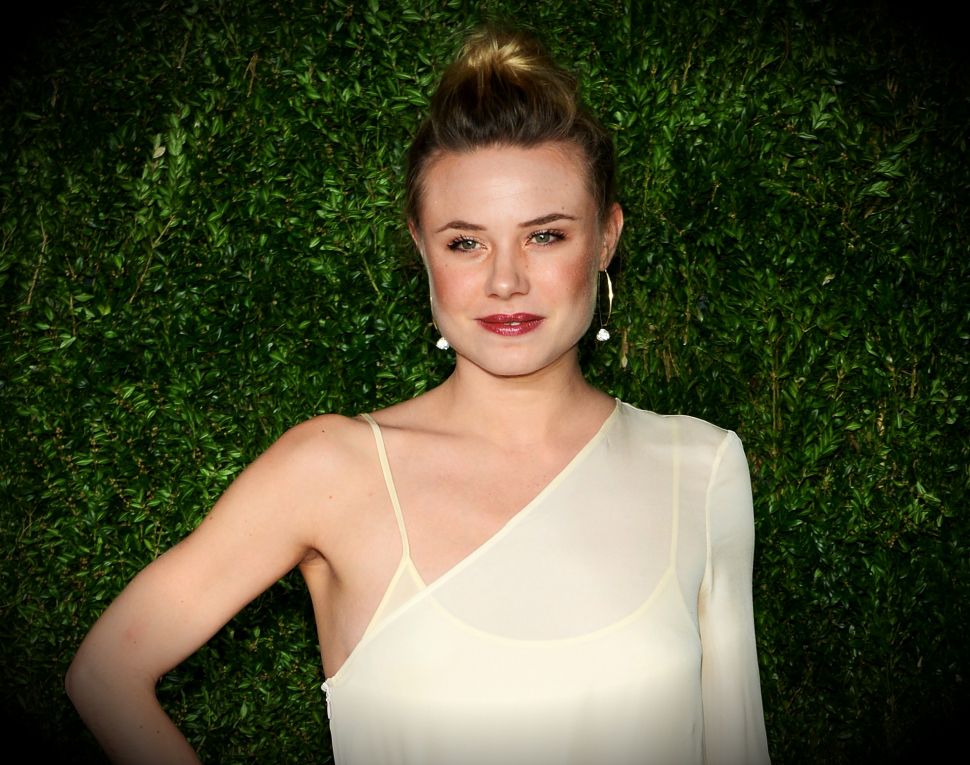