How do I assess (impartially but subjectively) the value of Heidi Schreck’s semi-monologue recalling how, as a teenager, she would travel to American Legion halls to debate the significance of our nation’s founding document? In other words, what does What the Constitution Means to Me mean to me?

As Schreck digs deeper into the framing and amending of the Constitution, as well as a history of violence against women in her family, the facts are shocking—like how many women are raped or killed by their partners each year. The straight, male viewer shakes his head, cozy in his personal blamelessness. But is he? Did I know that in 2005’s Castle Rock v. Gonzales, the Supreme Court ruled that the 14th Amendment could not be used to sue the police if they failed to enforce a restraining order? As Schreck says, “This ruling is most devastating for women of color and queer and non-binary and binary trans folx, people who are less likely to be helped by police than I am.” I didn’t know; now I do. What the Constitution Means to Me means that I need to do better, if I want to call myself a feminist or an ally.

Can a piece of theater (or any art) make you better? After seeing this show for the second time (after last year’s run at New York Theatre Workshop), I believe so. Sure, there have been works of art that caused riots, or won “obscenity” cases, even some—like 2002’s The Exonerated—that spurred politicians to address wrongful conviction and the death penalty. Art can make a difference, it can improve you. But what does it take? Brutal honesty and plenty of facts. Schreck provides both in abundance—along with natural charisma and loads of humor.

The piece is a model of how a playwright-performer can use the memoir-monologue (a genre that can flounder in banal self-indulgence) and electrify it within a harrowing historical context. Director Oliver Butler works beautifully with the deceptively loose and discursive text to shift from the comic opening section to something more confessional and angry. The room (a deadpan recreation of a Legion hall by Rachel Hauck that practically reeks of cigar smoke) seems to cool and contract as Schreck’s exegesis of the 14th Amendment leads to the story of how her great-great grandmother Theressa emigrated from Germany to Washington state as a mail-order bride, eventually dying of “melancholia” in her thirties.

That tale segues into how dangerous life was for wives in the Northwest of the late 1800s—newspaper headlines rife with spousal abuse and murder. How her grandmother married a man who beat her and raped the children. Then Schreck moves into her own sexual encounters drenched in inchoate fears, an abortion both empowering and humiliating, all filtered—she realizes as an adult—through “centuries of fucking inherited trauma.” This ingenious play keeps peeling away its layers, to reveal a blood-chilling core truth: The Constitution isn’t here to protect you; it’s to protect them and their property. You used to be the property. One day, you might be again.

OK, that’s horrifying, but there’s also gentleness and laughs along the way, and hope for the future. Downtown treasure Mike Iveson plays a refereeing Legionnaire, benevolent but stern, and as the piece deconstructs itself he steps out of character to talk about his own navigation of queerness and masculinity. Part of the delight of the last section is a surprise guest, so I won’t give it away—except to say she’s young and brings the story back to its roots as a debate about the Constitution. The audience is encouraged to hoot and whoop and stomp its feet. This is theater as historical exorcism, town hall, and humanist rally. Bring your woke niece and your racist uncle.

Earlier, I called What the Constitution Means to Me a model of a certain type of theater, but it’s also a model of thinking about oneself in the world. Everyone should do what Heidi Schreck’s doing. I don’t mean writing a play that gets you critical raves, a guest slot on The Late Show with Stephen Colbert, and a ballyhooed Broadway run; land’s sake, we’re not all that talented. I mean looking at your life, your family, where you come from, and your social identity in a cold, historical light. What are your rights? Can you help ensure that everyone has those rights? People can change. But the Constitution? The court’s still out on that. 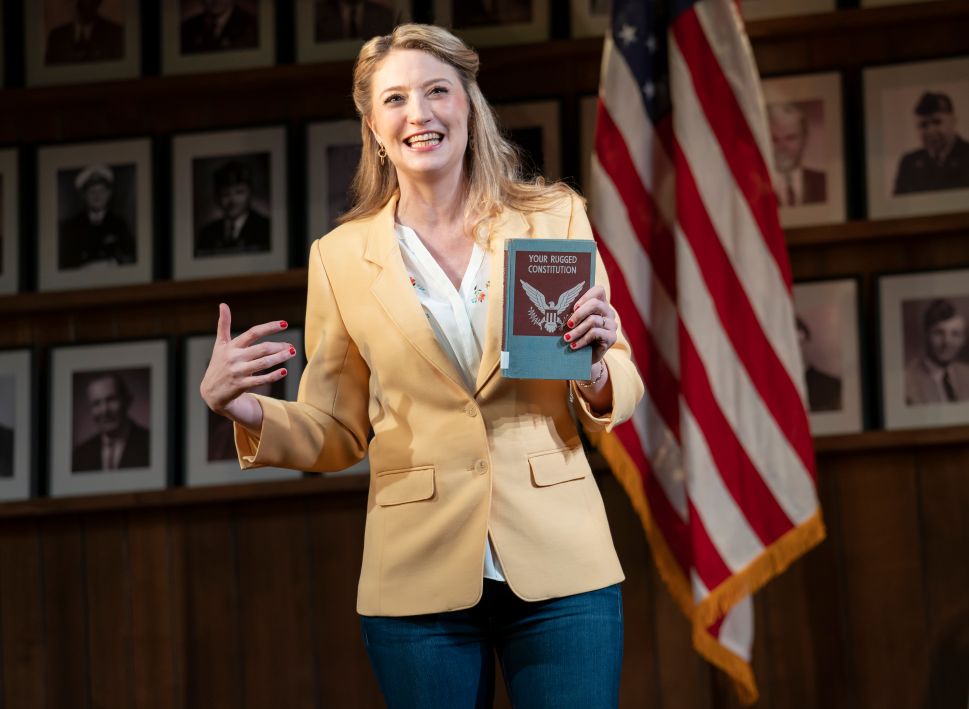 Filed Under: Arts, Theater, Rachel Hauck, Mike Iveson, Heidi Schreck, What the Constitution Means to Me, US Constitution