Selina Meyer is watching me sleep. She’s there while I’m in the bathroom showering. And out in the living room of my hotel suite she’s looking over my shoulder while I rifle through her things.

For fans of HBO’s Veep, which kicks off its final season this weekend, that probably sounds like a dream come true—and it will be for travelers willing to make the trip to downtown Washington, D.C., and check into the Hamilton Hotel.

As part of its renovation, the near-century-old spot, which has hosted its fair share of real-life presidents over the years, has partnered with HBO to replicate sets from the acclaimed show, which for six seasons has starred Julia-Louis Dreyfus as a hapless, caustic vice president (and a former short-lived president). In the lobby of the 12th floor, it has designed a replica of Meyer’s Oval Office, and the suite just down the hall has been overhauled to look like the interior of Meyer’s brownstone.

“What’s unique about it is that 99 percent of the items are from the set,” Yauny Wheaton, director of consumer marketing at HBO, explained just before a screening of the Season 7 premiere at the hotel Wednesday night. “You’ll look at the couch and the chairs and they kind of look like they were perfectly made for the Hamilton, but they’re actually from the show, even the little knickknacks.”

In fact, the only items that aren’t props are probably the TV and mini-fridge, said Terri Jannes, who designed the project, as she gave a group of awestruck Selinaphiles a tour of the space. “The big pieces of furniture and all the accessories and pictures, even the tree, are all from the set.”

On the wall Jannes has hung pictures of Meyer meeting with various dignitaries from the series, family photos and even her fictional diplomas. Shelves are lined with faux books about the Meyer administration that can be seen in the background of Veep. Even the bedside drawers are stocked with her things.

“Next to the bed, there’s a little notepad written in Julia Louis-Dreyfus’ handwriting,” Jannes said when asked what her favorite prop is. “That’s what I would take with me. I hope it doesn’t go home with someone.”

“I’m with her. I was her. I am her. Buy double-A batteries,” reads a page in it. (I thought about taking it but figured it would be pretty obvious I was the culprit.)

Guests who book the suite (rates start at $399 a night) will also receive a copy of Meyer’s autobiography, A Woman First: First Woman, as well as a sheet of commemorative Selina Meyer presidential stamps. Yes, it’s all very nerdy, and will probably draw only the most devoted of fans, but then again, Veep fans do tend to be rather obsessed.

“I think this type of thing could work for a lot of shows,” Wheaton said. “What it wouldn’t work for is something that’s overly themed. I don’t think a Game of Thrones suite would work.” She’s probably right. The Iron Throne looks a little less comfortable than the Resolute desk.

The final season of Veep premieres March 31 on HBO. 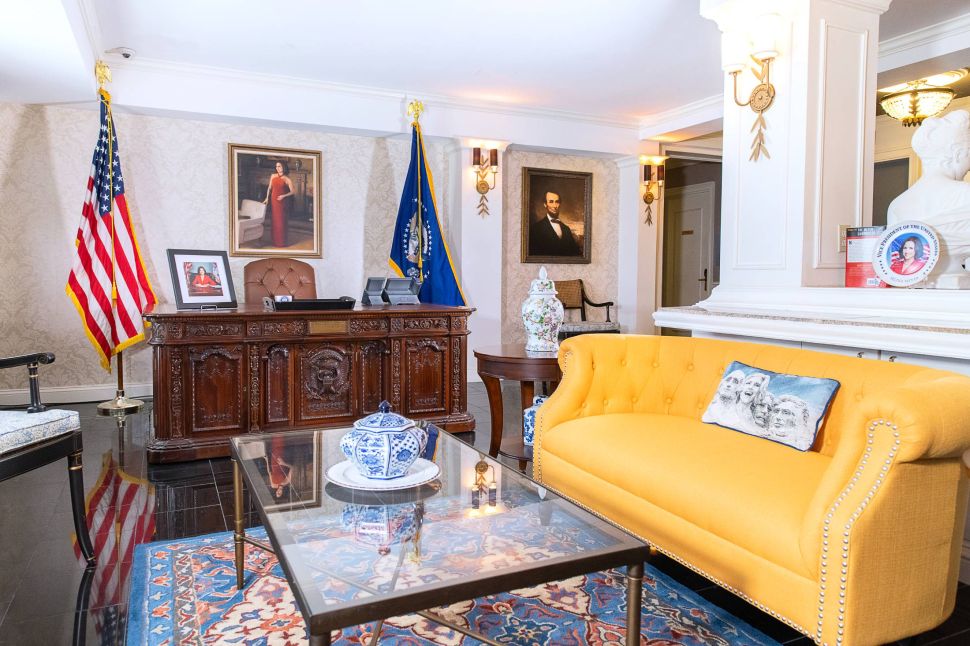