The fabulous Judy Holliday may have bid adieu to Broadway lights and public adoration in 1965, two weeks before her 44th birthday, but the glow of her memory still burns brightly as ever. A new play with music has just opened in New York, celebrating her sad life and dazzling career, and aptly entitled Smart Blonde. It is something of a disappointment, never rising to the equal heights of the star’s titanic accomplishments on stage and film, but radiant in a career-making central performance by a terrific newcomer named Andréa Burns. Keep an eye on this girl. She is going places.

Sorry to say, reducing the complexities of an unconventional life to 90 minutes without an intermission requires skills that are beyond the reach of writer Willy Holtzman. The result is a patchwork quilt of events that hit the highlights without developing them. To make matters worse, in support of Burns, a multitude of famous and colorful characters from Broadway and Hollywood are played by three actors with varying degrees of moderate talent, directed by Peter Flynn in an attempt to avoid a look of traffic gridlock that can only be described as occasionally successful. The icon that was Holliday deserves a more stunning tribute than this.

Still, the show is not without its moments—almost all of them when Burns takes center stage and showers the audience with a smile as wide as Trump’s wall and a singing voice as supple and captivating as a musical high-wire act. She doesn’t really look like Holliday, but by the end 90 minutes, she somehow channels the legend back to life before your eyes. It’s a command performance in every way.

Set in a recording studio shortly before her death, the narrative leap frogs back and forth in time through a series of flashbacks. Born Judith Tuvim (the name in Hebrew means “holiday”), she was the daughter of Russian-Jewish communists and intellectuals who were the antithesis of show business comedy. Her earliest New York appearances in 1938 were downtown in a Greenwich Village jazz club called the Vanguard as part of a comedy act called The Revuers that included her fellow politically bent pals Betty Comden, Adolph Green and Green’s roommate, Leonard Bernstein, at the piano. They ran for ten years.

Holliday moved uptown to make her first big Broadway splash as the dumb-as-a-fox, smart-as-a-whip showgirl Billie Dawn in Garson Kanin’s Born Yesterday, repeating the role in the 1950 movie that won her an Academy Award over Bette Davis in All About Eve and Gloria Swanson in Sunset Boulevard. The play touches on how, in the same year she won her Oscar, she was accused of being a communist and was subpoenaed to testify before Congress where she was one of the few show-biz celebrities who not only refused to name names but was completely exonerated with her skyrocketing career intact.

Throughout that career, she moved from triumph to tragedy, typecast as the dumb blondes she hated in movies, turning her back on the theater, and marrying musician David Oppenheim. But when she did return to Broadway in Bells Are Ringing, tailored for her talents by her friends Comden and Green, she won a Tony award. Her last film was the MGM musical version, directed by Vincente Minnelli, in 1960.

She was in the middle of realizing her life-long dream in a straight dramatic role in Laurette, a pre-Broadway play about Laurette Taylor, when her battle with breast cancer recurred and the show closed in Philadelphia. At the end of her life, she lived with the late jazz musician Gerry Mulligan, who introduced her to serious drugs to relieve her pain, but Smart Blonde avoids the more depressing aspects of her experience in an attempt to keep the pace light and breezy.

The facts that illustrate the diverse ways she continually slaved to pick up the pieces and put her career back together are assembled like items pulled from a briefcase and enhanced by musical numbers—oddly without one show-stopper from the score of Bells Are Ringing. It’s nice to hear Burns sing Irving Berlin, Harold Arlen, Harry Warren and Dorothy Fields, but how do you explain nothing by Comden, Green or Jule Styne, who helped to make Holliday famous?

The trio of performers playing a cast of hundreds (Mark Lotito, Andrea Bianchi, Jonathan Spivey) work hard to keep the movement going, but it’s annoying and difficult to keep up with who they are and to what purpose they drop in and out of sequence. The one who plays skirt-chasing Darryl F. Zanuck, head of 20th Century Fox Pictures, one minute, is also a vulgar Harry Cohn, head of Columbia Pictures, the next.

It’s often too sketchy to follow, but never too difficult to concentrate on the voluminous gifts of Burns. In her curly blonde Judy Holliday wig and nasal Born Yesterday accent, she runs the gamut of joy and emotional turbulence—funny, defiant, vulnerable and heartbreaking at the same time. She also sings like a dream. Smart Blonde is a sluggish, highly uneven work in progress, but still worth seeing if you want to discover a dynamic talent on her way to stardom. 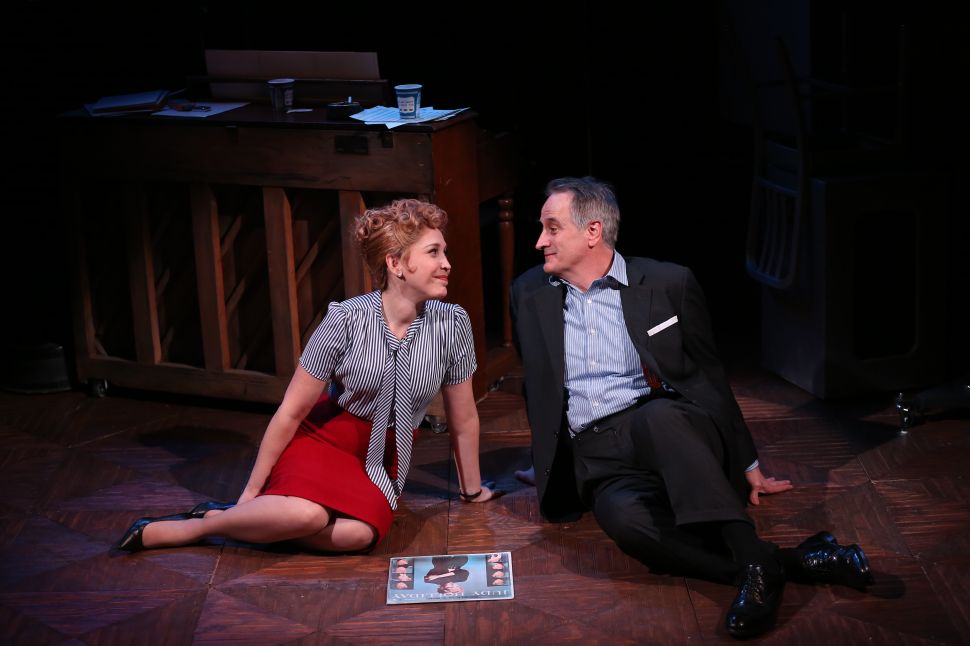