This week, TV viewers got a first: NBC’s Tonight Show With Jimmy Fallon aired an episode on Monday that was shot entirely on the new Samsung Galaxy S10+ smartphone, bringing a never-before-attempted production spin (and marketing gimmick) to the late night talk show wars.

The show opted for a remote format for its special camera phone episode, which saw Fallon perform and interview his guests around different locations in New York, rather than in the typical couch-and-desk studio. That gave Samsung the opportunity to show off the Galaxy S10+’s low-light capabilities by shooting in dark bars and evening riverside settings, reinforcing the idea that the whole thing was a blunt ad for the phone maker.

Nevertheless, the episode was neat—even if it wasn’t incredibly unique.

Because, as this may have well been the first time any of the various Jimmy-hosted talkies have fully traded in professional cameras for a smartphone lens, that doesn’t mean the trend of doing so hasn’t been growing across TV, movies, music videos and commercials for the last decade.

Here’s a highlighted history of the times—before this week’s Tonight Show episode—that iPhones, Galaxys and other phones were tagged in to do the jobs of film or studio cameras.

The first full-length film of record to bring a “shot entirely on a cell phone” claim was 2008’s SMS Sugar Man. With its production taking place before the iPhone was released—or basically any other popular smartphone—Sony’s Ericsson W900i was picked to serve as the camera here.

The NSFW South African movie has a total student film vibe, so its less-than-great videography, courtesy of the primitive camera phones picked to do the job, feels about right.

One of the first iPhone-shot films is 2011’s Night Fishing, a 30-minute mini-feature by lauded South Korean filmmaker Park Chan-wook. Though the fantasy-horror flick certainly lacks polish, Park was able to pull off some impressive videography with the collection of now-seven-year-old Apple phones he used as cameras.

Of course, though Park and his co-creator brother cited practical reasons for why an iPhone was perfect for filming Night Fishing, the fact that the project’s entire $133,000 budget was fully funded by KT (South Korea’s largest mobile carrier) seems like the real motivation.

Sure, Nokia was the king of cell phones in the mid-2000s, but the cameras the company built into its smartphones in the early 2010s were pretty good, too. For full-length movie Olive, co-directors Hooman Khalili and Pat Gilles taped some film lenses to a Nokia smartphones, the N8, and came up with an interesting look.

Nokia did not fund Olive, despite its co-creators hitting up the then-struggling phone brand for money ahead of filming and releasing it in 2011.

One of the first commercials filmed entirely on a smartphone was visual artist Harald Haraldsson’s “Moments,” with Samsung’s Galaxy SIII handling the shooting duties.

The piece, which served as an ad for Icelandic telecoms company Síminn, features two robot arms, one of which is holding the camera phone. At the end of the commercial, the two arms face each other, and the Galaxy SIII that’s capturing everything you’re seeing is reflected back in the mirror that the other robot arm is carrying. It’s gorgeously shot and cleverly meta.

In the category of “iPhone footage that’s won an Oscar,” we find Searching for Sugar Man. As the story goes, director Malik Bendjelloul ran out of 8mm film while documenting the legend of a 1970s rock-and-roll artist. So, to finish the shoot, he turned to a $1.99 iPhone app called 8mm Vintage Camera.

Thanks to the app’s Instagram-like filtering, the scenes shot with the iPhone mixed in well with the rest of the retro-looking doc. Well enough to warrant a Best Feature Documentary honor at the 2013 Academy Awards, that is.

The first film capable of convincing you it wasn’t completely shot on an iPhone was 2014’s I Play With the Phrase Each Other. Since the whole movie is in black and white, the smartphone camera limitations are harder to detect.

Also cool: Every scene in I Play With… revolves around two people chatting through a phone call.

When Tangerine debuted at the 2015 Sundance Film Festival, it got more attention than any other smartphone-shot movie before it. The Magnolia Pictures flick about a transgender sex worker turned to the iPhone 5s’s camera, an anamorphic lens attachment and an $8 app to keep its budget under control, but there are plenty of scenes throughout that would require a pretty trained eye to detect film wasn’t used.

Ultimately, Tangerine was praised for its story and direction, but the fact that its iPhone videography didn’t distract from any of that was a pretty big statement in itself at the time.

The sixth season of ABC sitcom Modern Family brought phone cameras to prime time. With the plot for its “Connection Lost” episode unfolding entirely through conversations that the show’s characters were having through Apple device screens, co-creator Steve Levitan decided everything for the episode might as well actually be filmed with Apple products.

This meant that iPads and MacBooks were also used to capture this installment of Modern Family, not just iPhones. But that’s still good enough to make this list.

Edward Sharpe and the Magnetic Zeros’ ‘No Love Like Yours’ (2016)

Some people might have a hard time actually believing that the beautiful “No Love Like Yours” music video from Edward Sharpe and the Magnetic Zeros was filmed on an iPhone. Let alone filmed at the direction of Olivia Wilde—who is known more for her acting chops than videographer skills.

Of course, the deceptively cinematic look to the video came courtesy of an extraordinary “frankenstein rig” that attached an iPhone 6s to a combination of still photography lenses. So it wouldn’t be a stretch to call that kind of cheating…

Michael A. Cherry is known for executive-producing the Oscar-nominated hit movie BlacKkklansman, but his film before that, 9 Rides, was a smartphone-shot dandy. Following the story of an Uber driver on New Year’s Eve, the full-length movie was the first to be captured with the then-new 4K video resolution that the iPhone 6s brought.

9 Rides went on to play multiple film festivals, like SXSW and Chicago International, which were beginning to become camera phone movie stomping grounds at the time.

Back to late-night TV, Google teamed up with the Jimmy Kimmel Live show to present a music video for Eminem’s song “Venom,” shot entirely on a Pixel 3. That’s a lot of collaborations, true.

Though the performance of the phone camera (and Eminem) came across kind of meh in this evening, Empire State Building-set video, the idea that the Pixel 3’s camera can work at night was somewhat well conveyed.

Now, back to music videos filmed by phones that actually look great! John Legend’s “A Good Night” put the Google Pixel 2’s camera to use in just the right way for its night club-set diddy.

Legend is known as a Google fan—he even has his voice coming to the Google Assistant—so it would make sense that the pop star and celeb would see to it that his Pixel production looked as high-quality as possible.

Steven Soderbergh might be the most famous filmmaker yet to turn to an iPhone lens as their tool. His 2018 full-length thriller Unsane launched at film festivals, and eventually theaters, alongside the director’s praise for the smartphone-as-a-movie-camera scheme—“the future” of videography, as he called it.

With the iPhone 7s capturing all the action, Unsane has a good-but-not-great look to it that often come across a bit too dark and blurry. Luckily, Soderbergh kept at his smartphone filmmaking craft and improved…

For his follow-up to Unsane, Soderbergh cooked up a business-basketball film called High Flying Bird. And, yes, it was also shot exclusively with an iPhone—this time upgrading to the iPhone 8.

The Netflix-produced film is brighter than Unsane, which could be one of the reasons why, beyond extra experience, the director had an easier time making this smartphone film look crisper than his first.

That’s right: Even after a decade of smartphone film- and TV-making, there are still a few things that might yet take some time to iron out—even for a pro like Steven Soderbergh. 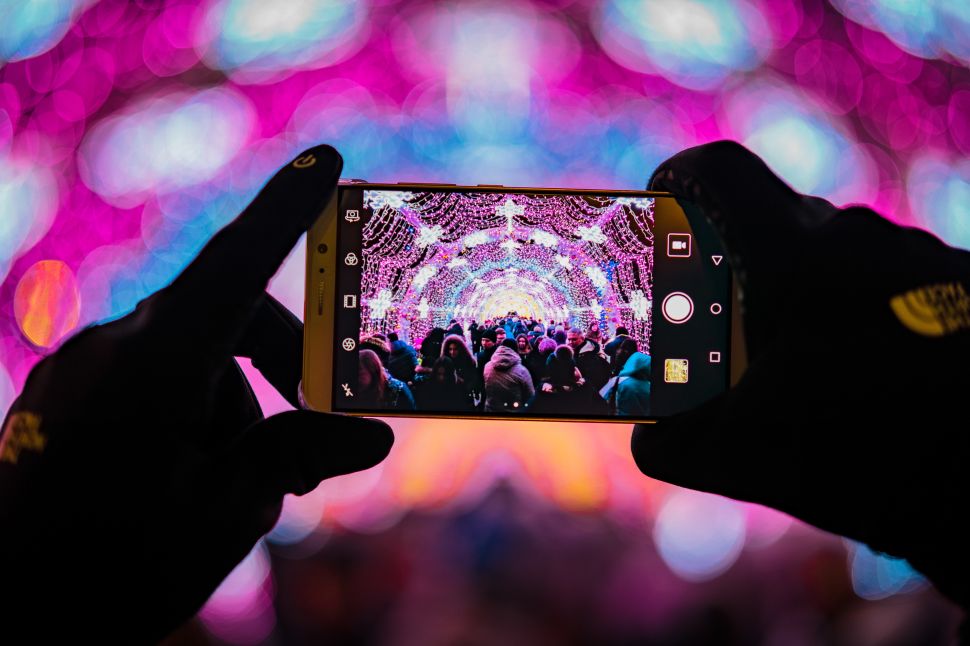