It’s hard to imagine a fuller, richer Aspen—little real estate is left for new mega-mansions, millionaires are a dime a dozen and part-time residents are full-time moguls. But this season, the ski area tops itself off by rounding itself out.

Aspen Skiing Company, which operates the area’s four mountains (including Aspen Mountain), has studded its portfolio with the completion of the adjacent Snowmass’ $600 million base village. Less than ten miles away from the area’s crown jewel, Snowmass is no longer sidelined. With this new ski hub, Aspen is clearly spreading some of its wealth around—a rising tide lifts all boats, so they say.

Now with yet another arena for après-ski, the area comprising Aspen Snowmass has become larger than life—here’s how to see the best of both worlds.

Snowmass Base Village is the new “it” place to stay.

A short drive separates Snowmass from its tonier sister, Aspen, but it’s all relative this season: the 50-year-old ski area unveiled Snowmass Base Village, a $600 million project that finally gives travelers more reason to indulge and linger before and after they ski. All in all, it’s an ideal complement to its increasingly ritzy neighbor, aligning itself as a carefully calibrated, casual alternative. The development itself—more Patagonia than Prada—is home to the state’s largest climbing wall, for starters, and an ice-rink (aligning its concept with the posh Beaver Creek). And yet it’s not all fun and games—it’s still fancy enough to serve up $120 caviar crepes, after all.

Here, the new Limelight Hotel Snowmass stacks up with the recent multi-million dollar renovation of Viceroy Snowmass, elevating the village’s ski-in, ski-out accommodations without much posturing; interiors by NYC’s Stonehill Taylor strike a relaxed tone where Luxury Rooms simply mean larger and cozier, with upgrades like balconies and fireplaces.

Or why not take up residence?

The locus of Snowmass’ residential facelift, the Lumin Residences, is one to keep an eye on, though there’s little room left in three of the four complexes. But there’s still a $6.3 million penthouse overlooking the heart of base village available. With 3,284 square feet and four bedrooms, it offers prime access to the lifts and private elevator access. Cha-ching.

Let a gondola deliver to your clubhouse door.

Aspen’s private clubs are legion, and it’s little surprise that Snowmass soaks in the angel’s share. After Aspen Skiing Company successfully opened a private club in Aspen, it’s expanding the idea with Mountain Club at Snowmass. Induction rates start at $50k and shoot up to $100k, a bundle to pay for bragging rights (only 228 memberships are available) and unlimited hot cocoa, but the club’s family-sized lockers and its contemporary, two-floor clubhouse offer the ultimate perk of access for Snowmass’ seasoned guest (Elk Camp Gondola lies just outside).

When you need Aspen’s ritzier vibe, it’s right around the corner.

Meanwhile in Aspen, luxury gets sultry at Hotel Jerome. After renovating a nearby 1904 Aspen Times newspaper building, a new subterranean speakeasy, Bad Harriet, lures high-society underground. Names matter in a town prone to arrivistes, and the bar models itself on the wife of the 1889 hotel’s original founder—herself a New Yorker. Embracing her mischievous side, a moody mix of studded leather armchairs rest alongside brassy-trimmed surfaces, walls, and fixtures, while cocktails tilt towards ingredients with flair; the eponymous rye cocktail, served in a vintage flask, shakes up not-so-subtle notes of passion fruit, roasted pineapple, blood orange and bitters (of course).

And should you choose to live in the moment—Harriet would, after all—the hotel unveiled a pair of 2,000-square-foot residence-style bookings atop the same building.  For upwards of $12,500 per night, anything from walk-in closets to gas fireplaces come standard—as does complimentary use of the hotel’s Mercedes-Benz fleet.

Don’t miss your chance the dine in a yurt.

Seasons come and go, and Aspen’s ephemeral perks are especially swift. Chief among them is EMP Winter House, which literally popped up at The St. Regis Aspen Resort’s Chefs Club with a courtyard of kitted-out yurts (plus an elegant main dining room). Opened in December by Eleven Madison Park’s Daniel Humm and restaurateur Will Guidara, guests can gram inspired Alpine cuisine (fondue, of course) and more (like flaming baked Alaska) with one catch: the season’s most coveted reservation is for American Express cardholders only. AMEX won’t pick up your tab, but for the full-branded experience guests can request a complimentary lift in a new 2019 BMW X5 (so you can shot ski responsibly).

And when shopping calls, seasonal pop-ups have you covered.

Pop-ups aren’t just for itinerant restaurateurs. Aspen, for that matter, is the entree for a handful of European brands. New this season, Germany’s Rimowa moved in with a pretty little pop-up, sporting the classic brand’s famous trunks in an edgy, pink-printed corner-store that makes the brand look 120 years young. Nearby, the 110-year-old French brand Rossignol also opened an American outpost this season, debuting the brand’s first collection of exclusively wintery staples—fittingly, a wild pair of $600 ski pants come in cheetah print, and a faux-fur lined coat will cost a cool grand. 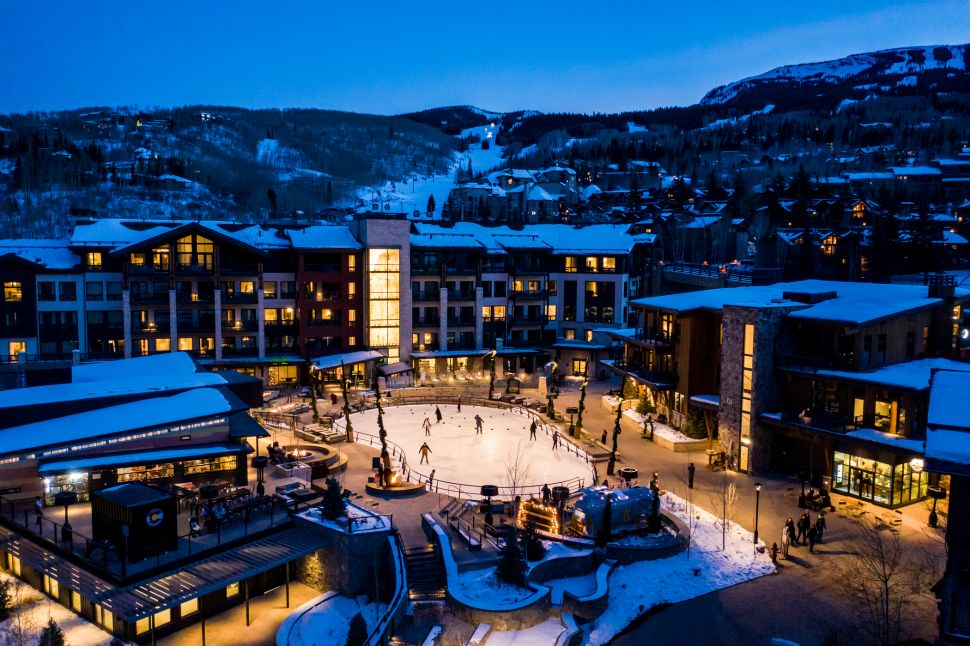