Vaginas are trending at the Spring/Break art show. As a subject for reflection, female genitalia has long held the fascination of artists, but in the context of the fair’s stated curatorial theme, Fact or Fiction, it’s a slightly unexpected trend. While the show’s model of inviting curators, not galleries, to organize booths frequently attracts politically themed art, vaginas fit that bill only through challenging taboos. They may conjure mystery, but they don’t evoke duplicity.

Rigorous adherence to the stated fair theme has never been a hallmark of Spring/Break, now in its seventh year, and this iteration is no different. Rather, booths are unified by the extreme ambition of the curators and artists, a DIY approach to exhibition making, and a disavowal of the white cube. Here, the preferred unadorned white wall of the gallery is replaced by wallpaper, mock store displays, news sets, information kiosks, decorative vines, fake wood paneling and pretty much every color of paint available in Pantone’s color finder.

It’s an effective strategy to engage the viewer, but that comes at a cost. Identifying artwork that will look good anywhere outside of the environment it’s being shown can be difficult. Last year, an abundance of experiential art that could only be seen at Spring/Break mitigated that issue. This year, those works are almost entirely absent, perhaps a result of reduced square footage and a jerry-rigged electrical system that was resolved only days before the show opened.

The result is a more traditional looking art fair with weirder themes than you’ll see elsewhere. In addition to vaginas, bad word puns, anti-Trump art, and constructed documentation were all frequently explored. When asked exhibitors what the art was about, I often received simplistic lectures on the growing polarization and how to stop it or the upside-down state of the world. (One booth even came with limited edition T-shirts.)

Like any fair, though, the reason to attend is not the volume of art to be seen, but the treasure within it. While most Spring/Break exhibitors remain relatively unknown, the fair regularly attracts a handful of tested talent, this year including Sara Vanderbeek, Magda Sawon of Postmasters, Dustin Yellin of Pioneer Works, and Eve Sussman and friends. These booths, along with other highlights identified below, make the fair well worth the visit.

Undoubtedly one of the more thoughtful curatorial efforts in the fair, Jennifer Dalton, and Jennifer and Kevin McCoy’s TV GUIDE uses the form of TV narrative genre as an organizational device for artworks that loosely fall within those genres. For example, Oasa DuVerney’s satirical drawings of newspaper headlines and William Powhida’s Artforum ads hang in the news corner, while in another corner, Peter Rostovsky’s drawings of people flying like birds over manicured gardens fit the science fiction genre. (Full disclosure: I run a podcast with Powhida). Selectively applied wallpaper designed to mimic TV static unifies the booth and tv remotes are scattered on the floor as a clever device to get viewers to ask the curators questions.

These large unframed figurative works by Yelena Yemchuck picture surrealistic female figures dripping with desire for one another. There’s a charm to the stystic rendering of these women in strange landscapes—a giant bird wraps its neck around a person in one image, in another a hand pulls a lone figure out of the picture frame. In each case, the subjects seem happy to be watched.

Valley girl speak is real. Ryan Michael Ford told Observer this week that overhearing his former downstairs neighbors endlessly converse inspired the text on his custom wallpaper. “OMG,” “I was like totally,” and other permutations of the millennial slag, perfectly balance Ford’s Rainbows and a Pez-dispenser shaped alien. Its bugged out eyes suggest it too has experienced an “OMG” moment.

Ryan Bock’s project, which consists of black and white paper figures and camera devices. responds to a surveillance state in which visibility and conversation is described as freedom rather than a means of oppression. That narrative, though, is a construction, just like Bock’s installation. A brochure underscores this, instructing viewers to adhere to a specific sequence of events—see something first, then say something. “The more you look, the more you’ll see; the more you say, the more we’ll know.”

Karl LaRocca and Kristen Schiele participate in more than one artist-centered fair each year and that’s a boon to art lovers who want to buy great affordable art. Their print shop, Kayrock, works with skilled, under-recognized artists to produce 18.75 x 24.75 in. screenprint editions for just $60. That’s an incredible deal.

Sarah Potter and Caroline Larsen question what is real and what is make believe in a show that assembles art made for spiritual guidance. The booth includes an artist Tarot game, an ornate beaded tapestry depicting the sun and earth, and a delicately rendered drawing of a medusa head and castle. Roxanne Jackson’s splayed Chinese ceramic head Third Eye Fuck, Devil’s Card, stands out among all of this work, revealing a glowing pearlescent vagina.

Displayed inside what looks like the Holodeck, David B. Smith’s blobby fabric sculptures perched on top of colored plinths look like they might change form at any time. In art speak, this mutability might be described as “blurring line between figuration and abstraction”, an obfuscation the fair’s participants do a good job of dispensing with when addressing the show’s theme head on. Like a lot of work, Smith’s sculptures and wall pieces come from digital sources—video game screengrabs, youtube videos and other personal snaps from social media platforms. The images are altered in photoshop and then rendered in fabric.

Evoking Lisa Kirk’s art project House of Cards, a timeshare scheme in which professional actors sold collectors experiences in a literal shack, Phaan Howng’s The Eternal Navigators of Doom provides expert consultations on how to prepare for life post-apocalypse. Unlike Kirk, though, these services only seem to exist in the form of advertising. Howng creates a fake store front, a brochure offering safe passage packages and meal planning, and a large portrait of herself stationed at Spring/Break’s elevator bay. The only thing missing is Howng herself, who was not present to hawk her wares.
Observer’s inaugural Business of Art Observed on May 21st in New York is the premier event for art industry professionals. Join us for a half-day of talks, live debates and networking sessions with key industry players. The world’s leading art firms, galleries, museums and auction houses will converge to share what’s disrupting the industry today. Don’t miss out, register now 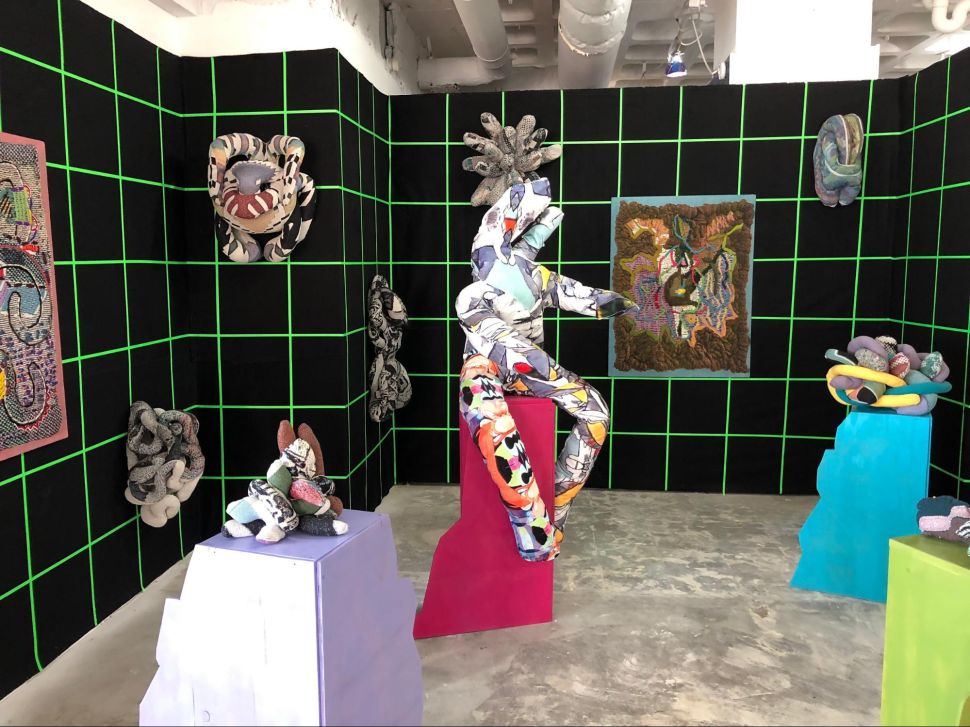