Welcome to Observer’s 2019 Spring Arts & Entertainment Preview, your comprehensive guide to the best of the season. We’ve combed through cultural offerings from across the country to bring you our picks for the events worth leaving home for, and the stuff you should be staying in for. Art lovers should also peruse our list of must-read books.

The spring art season is ripe with exhibitions that explore history, technology, LGBTQ rights and popular culture. From an offbeat celebration of Leonard Cohen to the ever-contentious Whitney Biennial, there’s plenty to see, enjoy and debate. Here, the 10 shows we’re most excited about.

“New Order: Art and Technology in the 21st Century” at the Museum of Modern Art, New York City (March 17)

Curated by Michelle Kuo, a former Artforum editor in chief now on the museum’s permanent staff, this exhibition purports to be more than just another look at bleeding-edge tech. While there’s computer-generated animation (courtesy of Jacolby Satterwhite, Tabor Robak and Ian Cheng), other inclusions are more esoteric: vacuum-formed sculpture from Seth Price, for instance, or a digital print on plywood by Wade Guyton. Don’t miss the eight-part hologram produced by the late, great Louise Bourgeois, or Josh Kline’s fridge full of gross bottled smoothies, made from ingredients like Windex, kale chips and Ritalin. (Look, don’t drink.)

This is a major milestone for a hometown hero who has spent years diligently exploring the potentials of supremely thick paintings. Beavers culls her imagery online and elsewhere; the resulting over-the-top sculptural paintings transcend mere kitsch. Recent bodies of work have delved into the aesthetics of makeup tutorials, sports culture and the embarrassing ripped-ab selfies beloved by workout junkies. This survey will run the gamut—an all-American celebration of junk food, sex and elaborate manicures.

The Hudson Yards development might be a tax-dodging playground for the new ultrarich, but at least the Shed—its Diller Scofidio + Renfro-designed arts center—will be giving something back to the city. One of the more ambitious shows on its opening slate is this joint venture between artist Gerhard Richter and composers Steve Reich and Arvo Pärt. It’s billed as a multimedia experience, a painting show with its own live soundtrack, courtesy of the Choir of Trinity Wall Street, the Brooklyn Youth Chorus and other musical collaborators.

Get ready for the divisive reviews over this exhibition, which aims to treat celebrity-owned instruments as objets d’art in their own right. As Rolling Stone reported, the vaunted axes will include ones played by both Eric Clapton and Jerry Garcia (nicknamed “Blackie” and “Wolf,” respectively) and a drum set from the Who’s Keith Moon. Rock ’n’ roll has long been a masculine affair—the phallic connotations of any extended, noodling solo are too hilarious to miss—but the show promises inclusions from Annie Clark (a.k.a. St. Vincent), who can shred with the best of her macho peers. If the populist appeal of “Play It Loud” rankles art-world purists, just wait until early May, when it will be on view in conjunction with “CAMP: Notes on Fashion.”

“Leonard Cohen: A Crack in Everything” at the Jewish Museum (April 12)

The beloved poet-bard died in November of 2016, just as America was waking up to its new, Trumpist future. This exhibition—which travels from Cohen’s hometown of Montreal—borrows its title from a line in his 1992 song “Anthem,” and includes artwork from Jon Rafman, Taryn Simon, Tacita Dean and others. Such an interdisciplinary celebration makes sense, considering that Cohen was also an accomplished novelist and a somewhat less accomplished visual artist. The show, fittingly, will have its own soundtrack, with Cohen covers by everyone from Feist and The National to Icelandic artist Ragnar Kjartansson.

MOCA kicks off a new exhibition series that gives L.A. artists free rein over the museum’s holdings. The inaugural edition is helmed by Elliot Hundley, who has assembled a compelling show around the broadly interpreted notion of collage. The concept is loose enough to include readymades (Cady Noland’s assortments of ordinary junk and objects), sculpture (Rachel Harrison), the appropriated cartoon figures of painter Julia Wachtel and Georgina Starr’s photographs. Hundley’s own work is also in the mix: an intricate, detail-laden assemblage of found images and other materials, all held in place by a countless number of delicate pins.

The Chicago-born, New York–based Simone Leigh scored the coveted 2018 Hugo Boss Prize last fall, beating out talent that included Frances Stark and Wu Tsang. The distinction comes with both a $100,000 prize and a solo spotlight at the Guggenheim. (Previous winners have put that latter platform to irreverent use; back in 2010, awardee Hans-Peter Feldmann simply covered the gallery walls with 100,000 single dollar bills.) Leigh’s show, titled “Loophole of Retreat,” will use sculpture and sound to “explore narratives of communal nurture, resilience and resistance,” according to early press materials. Meanwhile, downtown on the High Line, a massive, 16-foot-tall sculpture by Leigh will be unveiled in April. The artist is also part of the Whitney Biennial.

“Nobody Promised You Tomorrow: Art 50 Years After Stonewall” at the Brooklyn Museum (May 3)

The pivotal West Village gay-rights riots turn 50 this year. Celebrate with a drink at the Stonewall Inn itself—still a staple on the LGTBQ tourism circuit—and a photo show at the New York Public Library before heading to this survey of 22 living artists at the Brooklyn Museum, with work by David Antonio Cruz, Park McArthur, John Edmonds and others. The goal, according to a statement by museum director Anne Pasternak, is to weave “a more inclusive story of the Stonewall Uprising that connects it directly to the remarkably diverse community of LGBTQ+ artists carrying on the legacy of Stonewall now and into the future.”

Whitney Biennial 2019 at the Whitney Museum of American Art, New York City (May 17)

What will people be talking about at this year’s Whitney Biennial? Judging by early chatter, it might be the somewhat shocking percentage of artists involved who are based in New York City. Co-curated by Jane Panetta and Rujeko Hockley, the 79th edition of the exhibition goes heavy on the locals—Brian Belott, Josh Kline, Wangechi Mutu and Barbara Hammer among them. That’s not to say that everyone on the roster hails from the five boroughs. Notable out-of-towners include Paul Mpagi Sepuya, Martine Syms, the collective Forensic Architecture and Christine Sun Kim, whose drawings and sound work inventively engage with her own experiences as a deaf artist.

The Canadian photographer’s images are both terrifying and grand, capturing the landscapes of quarries, mines and other sites where the earth is savaged by industry. Traveling from Ontario to Azerbaijan, Burtynsky finds a perverse beauty in these devastated scenes. Photographs of brilliantly colored potash mines in Russia are nearly psychedelic, while those of China’s steel production zones are bleak and oppressive—a sci-fi vision of the future that’s actually our present. 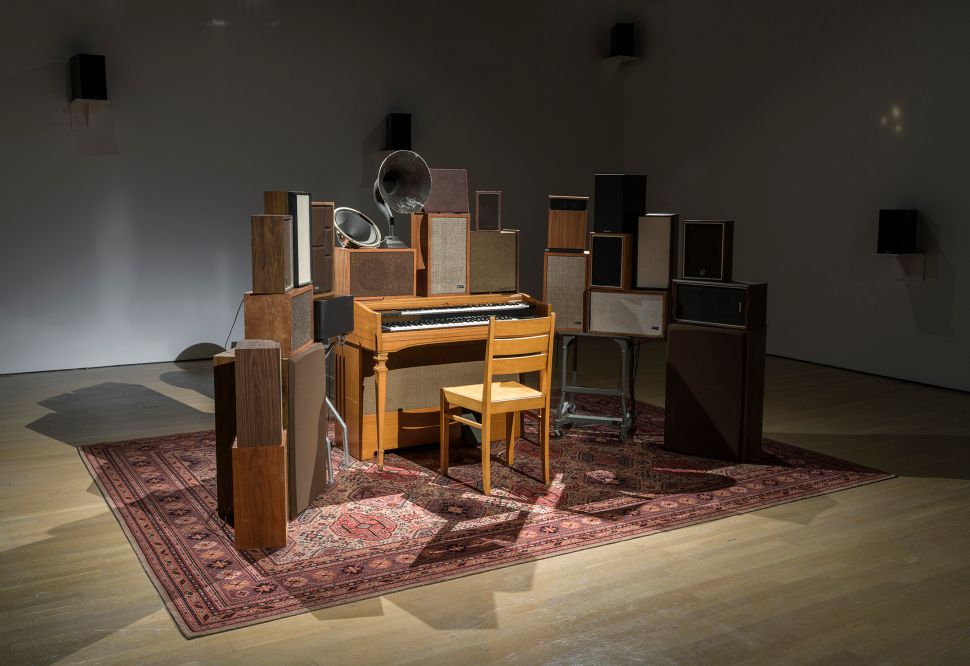