Welcome to Observer’s 2019 Spring Arts & Entertainment Preview, your comprehensive guide to the best of the season. We’ve combed through cultural offerings from across the country to bring you our picks for the events worth leaving home for, and the stuff you should be staying in for. Theatergoers should also check out our list of must-hear albums.

So we survived winter, with its dreadful polar vortices, flash storms that shut the city down, snowmageddons that fizzled out—and everything in between. Temps are rising and folks are starting to break out their non-woolen couture, which means it’s the perfect time to grab a date and absorb a bit of culture. On that note, we’ve rounded up 11 of the most promising performances in theater, dance and opera to get you out of the house for some mild—and maybe even wild—nights of aesthetic stimulation.

A few short years after Barack Obama occupied the highest office in the land, the U.S. is traumatized by more police murders of unarmed black people, we’ve got a white supremacist for president and we’re caging the children of immigrants. Jordan E. Cooper’s brazen satire asks why black people shouldn’t just up and leave. He dramatizes just that: a mass exodus of African-Americans from a toxic country that has become unsustainable.

The Lehman Trilogy at the Park Avenue Armory (March 22)

Three Bavarian brothers journey from Europe to Wall Street, where they establish one of history’s most successful financial firms—that is, until it collapses in the 2008 crash. A hit in London, the three-man epic (with Simon Russell Beale, Adam Godley and Ben Miles) transfers to the vast Park Avenue Armory in a production directed by Sam Mendes (The Ferryman). In just over three hours you’ll follow America’s fortunes from Gilded Age to Great Recession.

For its spring season at the Joyce, America’s premier Latino dance group offers new spins on recent work that explores cultural overlaps between the Latinx and Asian diaspora. With the rapid rate of assimilation and the heated arguments over immigration, it’s no surprise that the dances aim to explore identity and migration. Choreographer Annabelle Lopez Ochoa uses hats as a metaphor for cultural tradition in her Sombrerísimo—and this time, it will be danced by women.

One of the city’s most ingenious troupes, the Mad Ones create shows through intense research and improvisation, constructing sociologically exact period tales filled with lots of retro detail. This new production centers around the creators of a 1970s children’s program who have invited a group of parents for a focus group. We foresee awkward puppet interaction.

Mezzo-soprano Joyce DiDonato likes to stretch her velvety, infinitely supple instrument. Her new album, Songplay, fuses jazz sparks with bel canto rigor. We’re eager to see how the diva’s extracurricular activities put a spin on her first Sesto at the Met. In this passionate, gender-flipping “pants” role from Mozart’s final opera, DiDonato plays a lovestruck Roman youth who plots to kill the Emperor Titus (the one who finished the Colosseum).

Diary of One Who Disappeared at BAM (April 4)

When an anonymous poem in a newspaper caught Leoš Janáček’s eye in 1916, he was instantly inspired. The Czech composer combined verses about a village boy’s doomed affair with a gypsy girl with his own (unconsummated) obsession with a younger, married friend. Now the bracingly modern director Ivo van Hove (Network on Broadway) stages Janáček’s song cycle as a tale of a successful photographer tortured by a love he cannot have.

This spring’s Broadway musicals include Hipster Oklahoma! and two that adapt ’80s films (Tootsie and Beetlejuice), but this one’s the wild card. Hadestown is an original work based on the Greek myth of Orpheus and Eurydice, with a score by songwriter Anaïs Mitchell soaked in sonic Americana: folk ballads, jazz and bluesy rock. In the show, which had audiences swooning at London’s National Theatre, a heartbroken poet descends to the underworld to rescue his true love.

Hillary and Clinton at the Golden Theatre (April 18)

In 2017, Lucas Hnath was the toast of Broadway with his irreverent yet earnest Ibsen sequel, A Doll’s House, Part 2. Now the playwright X-rays another husband-and-wife team with issues: Bill and Hillary Clinton. The intense and mercurial Laurie Metcalf stars alongside the great John Lithgow—but don’t expect Saturday Night Live impressions. Instead, this brainy deconstruction of an iconic power couple exposes fault lines between politics and persona.

Pepperland at BAM (May 8)

Two years ago, beloved choreographer Mark Morris was commissioned by the city of Liverpool to devise a 50th-anniversary tribute to the Beatles’ landmark album, Sgt. Pepper’s Lonely Hearts Club. The result comes to Brooklyn for its New York premiere. The piece combines Beatles hits such as “When I’m Sixty-Four” and “A Day in the Life” and new tracks—all orchestrated and performed by baritone and ensemble. Morris shows his usual genius for humor and fluid athleticism, with dancers clad in eye-popping Pop Art suits.

American Ballet Theatre at the Metropolitan Opera House (May 13)

The centerpiece of ABT’s spring season at the Met is a celebration of artist in residence Alexei Ratmansky; the Russian-born choreographer joined the company a decade ago. There’s a lot of great ballet to see in ABT’s eight-week stay, including company premieres of Deuce Coupe (1973) by Twyla Tharp and Cathy Marston’s Jane Eyre (2016). We’re jumping to see the all-Ratmansky programs running from May 21 to May 23, which include his first ABT work, On the Dnieper (2009), and his most recent, Songs of Bukovina (2017).

Murasaki’s Moon at the Metropolitan Museum of Art’s Astor Chinese Garden Court, via On Site Opera (May 17) 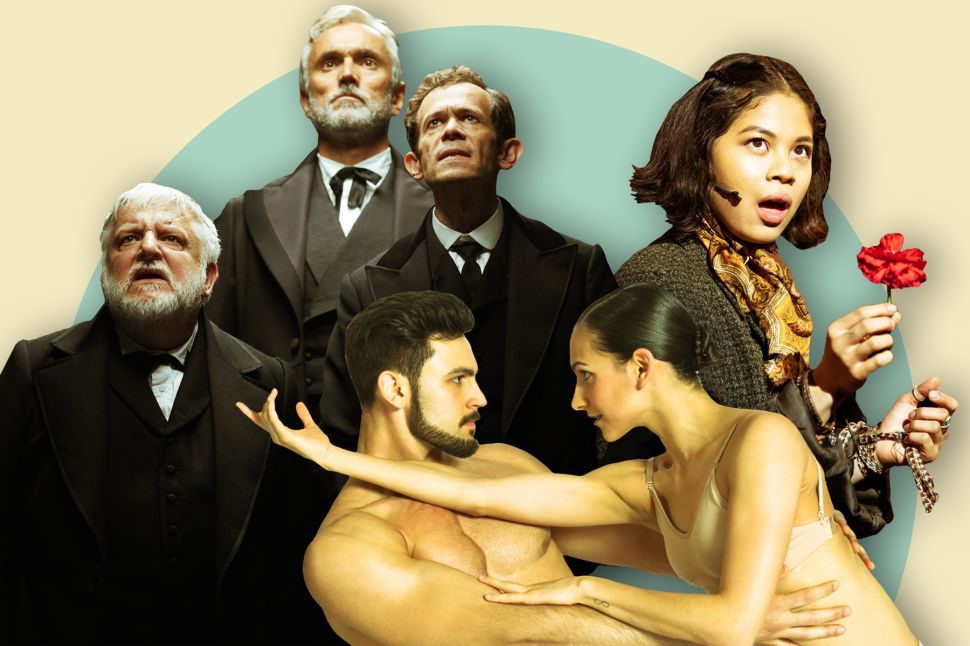