Welcome to Observer’s 2019 Spring Arts & Entertainment Preview, your comprehensive guide to the best of the season. We’ve combed through cultural offerings from across the country to bring you our picks for the events worth leaving home for, and the stuff you should be staying in for. Binge-watchers should also check out our list of must-see films.

Netflix’s latest crime anthology series comes from Canadian filmmaker Richie Mehta, who based his show on the notorious Delhi gang rape case from 2012, which sparked protests nationwide and captured international attention. Instead of exploiting the lurid details of the crime itself, Mehta takes a more cerebral, character-driven approach by focusing on the lead detective, played by Shefali Shah, and the cultural upheaval it ignited.

You’ve had two years to obsessively craft your theories and evidence boards about the Season 1 finale of Brit Marling and Zal Batmanglij’s critically divisive sci-fi epic. So, will all of the Reddit-worthy mysteries of Prairie, a missing blind women who reappears after seven years with eyesight and a fantastical story, be solved? Probably not. But if you can handle delving deeper into the show’s inventive, mind-bending universe, or if your taste occupies the very specific intersection of interpretive dance and time travel, then this is a must-see.

This freshman NBC comedy comes with a fun new trick: It’s the first to be filmed outside with a live studio audience. Starring Natalie Morales (Santa Clarita Diet) as an ex-Marine who’s found her calling tending an illegal neighborhood bar in her backyard, the show presents itself as an updated Cheers, with a few unusual, landlord-specific twists. It’s helmed by Josh Malmuth (New Girl, Superstore) and executive produced by Michael Schur (The Good Place, Parks & Recreation), so we know we’re in good hands.

This film-to-TV adaptation has a lot going for it: a stellar cast, including newcomer Esme Creed-Miles and The Killing’s Mireille Enos and Joel Kinnaman; director David Farr, who wrote The Night Manager; and Karen O covering the Smashing Pumpkins on its soundtrack. But even without its premium TV pedigree, Hanna had us with its premise—a classic coming-of-age tale in which the teen girl is in fact a feral assassin relentlessly pursued by the CIA. Who can’t relate to that?

This French sci-fi drama merges Tinder and Black Mirror, a statement that, on its face, may sound redundant to those who’ve been dating online long enough. Set in Paris, Osmosis poses the ominous question “If science could guarantee true love, would you say yes?” Of course, as with all tech-based solutions to messy human emotion, there’s a dark catch—one that involves pills, scientific experiments and data mining on an anatomical level. Our swiping thumbs are already gravitating towards our Apple TV remote.

Now that we live out each day in the abjectly incompetent and embarrassing political reality originally set forth by Veep, it’ll be cathartic to see what new lows the final season of the HBO comedy will bring to Selina Meyer (the eternally outstanding Julia Louis-Dreyfus) and her helpless political team. Sad as we are to see the Emmy-winning show say farewell, a second (!) presidential run for television’s most shameless politician seems like an apt goodbye.

CBS All Access is pulling out all the stops with its revival of the legendary sci-fi anthology series, executive produced and hosted by modern horror master Jordan Peele and starring everyone from Greg Kinnear and Kumail Nanjiani to Zazie Beetz and John Cho. Even more intriguing to us is the question of what qualifies as utterly terrifying and surreal in 2019, a year that brought us The Masked Singer.

The witching hour is upon us again. Netflix’s foray into the angsty, dark world of supernatural teen dramas was pretty much on the money with Chilling Adventures of Sabrina, a show that embraced horror and feelings in its reimagining of Kiernan Shipka’s titular character. Season 2 will continue to test the young sorceress as she grapples with warlock love triangles, new outfits, and Satan—in other words, the usual teen conundrums.

Hosted by Sir David Attenborough and filmed by the same crew that made the phenomenal Planet Earth, Netflix’s new nature epic has all the markings of something you watch incredibly stoned before bed… and then find yourself waking up to at 4 a.m., emotionally invested in the life-or-death struggles of a baby lizard being chased by a horde of ruthless snakes. If you just so happen to come out of it better informed about global conservation, so be it.

Of all the TV shows that premiered last year, Killing Eve had the most fun. Exuberant, twisted, chic, flamboyant and seductive are some of the words that come to mind when trying to pinpoint what makes the psychosexual, fashion-forward detective series so wildly appealing. Season 2 promises to build on the magnetic relationship between assassin-for-hire Villanelle (Jodie Comer) and her MI5 pursuant Eve (Golden Globe winner Sandra Oh), and, judging by the trailer, plenty of looks will be served in the process.

Ryan Murphy may now be under contract with Netflix, but that’s not going to stop FX from giving the gays everything they want. Enter Fosse/Verdon, the latest in the network’s decorated line of miniseries. With Tony Award winner Steven Levenson (Dear Evan Hanson) serving as its showrunner, the eight-episode drama focuses on the working partnership and romance between legendary director and choreographer Bob Fosse (Oscar winner Sam Rockwell) and Broadway powerhouse Gwen Verdon (Michelle Williams). Show queens, eat your heart out.

If you’ve never seen Game of Thrones, we humbly advise you to set aside 63 hours of your life to get caught up between now and April 14. If you have, then HOLY SHIT THE END IS NEAR. Are you Team Sansa or Team Khaleesi? Will the White Walkers destroy all of humanity or will the warring tribes of Westeros band together to stop them?? How many glasses of red wine will Cersei drink vindictively before it’s all over??? The ending of the most epic show on TV conjures feelings of excitement, promise, dread and instability all at once—it’s the televisual equivalent of Mercury rising. In your horoscope this spring? Power, chalices, dragons, the undead and a Twitter feed full of spoilers.

If you have time for only one new big-budget prestige show in your life this season, Hulu’s adaptation of Joseph Heller’s satirical WWII classic might be it. Directed and produced by George Clooney (who also plays an officer in it) and starring Christopher Abbott (Girls), the miniseries spared no expense—it even imported two of the few remaining authentic WWII fighter planes to Sardinia, where the miniseries was shot. As Clooney said in a recent interview, “There’s no way you can do this half-assed.”

Paging fans of American Gods: Amazon has teamed up with Neil Gaiman to adapt his 1990 novel, co-written with late author Terry Pratchett, for the small screen. Getting this work greenlit wasn’t any ordinary project for the British writer—it was his promise to his dying friend and co-author. The result is a six-part miniseries where an angel (Michael Sheen) and demon (David Tennant) must put aside their differences to fend off the impending apocalypse. From the looks of it, this surreal buddy comedy has wings.

When HBO’s critically acclaimed series was canceled in 2006, many devoted fans cried “too soon!” Now, a film that’s been 13 years in the making advances the story of the wild pioneer town another decade to explore the ramifications of South Dakota being granted statehood during the late 19th century. If you want to get in on the cult hit, which racked up 28 Emmy noms during its short run, good news: You really only have three seasons to binge. 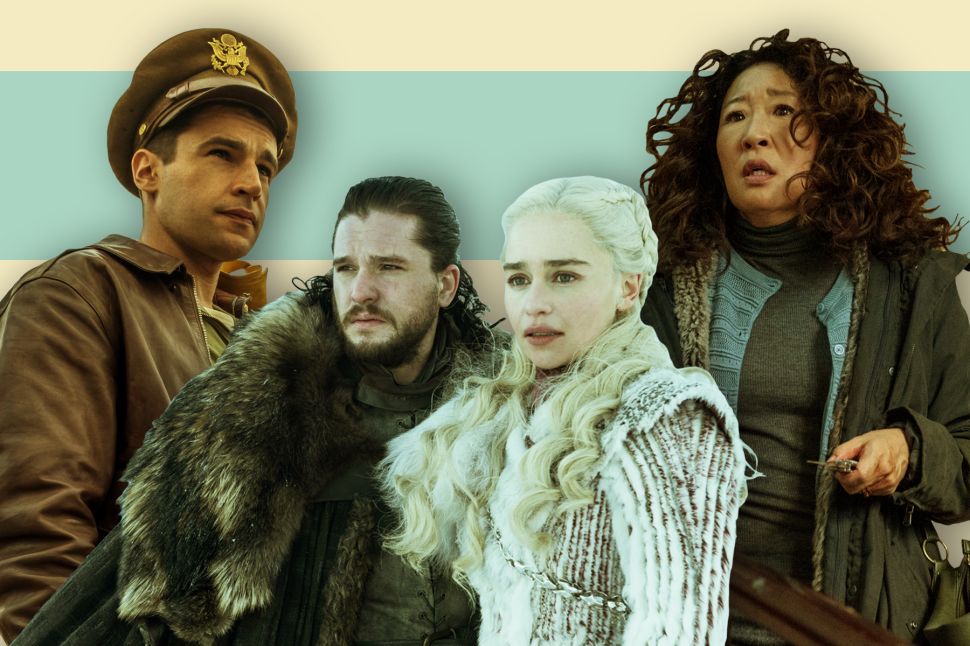