In the early part of the 20th century there was no better way to promote a book or play than to have it “banned in Boston.” The ban meant the work was salacious, risky and probably highly entertaining. Having your work banned was worth a fortune in free publicity. Producers intentionally sought the ban.

I think liberal Jewish Democrats now finds themselves in the same position when it comes to Representative Ilhan Omar’s anti-Israel positions. The establishment reaction is not only garnering her more free publicity for her ideas but greatly exaggerating her importance. Worst of all, the reaction makes it seem like liberal Jewish Democrats have something terrible to be concerned about. As one who spent decades in the media industry, I know firsthand that controversy benefits the seeker of influence.

Personally, I feel deep sorrow that Omar has chosen a very tiny corner of the world’s ills to focus on. Amid the slaughter, oppression, sexual violence and refugee crises, Israel’s conflict with the Palestinians is a mere tear drop in an ocean of misery.

There are more Syrian refugees (six million internally displaced; five million outside Syria) in miserable camps than there are Palestinian refugees (30,000 still alive from 1948; seven million if one counts their descendants). Clearly, Omar does not care a wit about the 25,000 babies the United Nations estimates will be born in the coming months to Rohingya women refugees, many of whom were raped by Myanmar soldiers, or the total of 700,000 Rohingya refugees living in squalor in Bangladesh. Not to mention the slaughters in Africa’s Mali, Somalia (Omar’s country of origin), and Nigeria; the sexual assault of female Saudi prisoners; or the one million Muslim Uighurs forced into internment camps in China.

So, what has she said that is so worthy of all the fracas and legislative action? Without getting into a back and forth on Twitter (which I choose not to use), let’s distill her remarks and the reactions to them.

First, she stated that legislative action favoring Israel was “about the Benjamins,” implying that policy could be purchased. President Donald Trump explained it best when asked why he gave to both Democrats and Republicans. He answered something to the effect of, “that is how you buy influence.” To think that politicians only answer to their consciences is naïve.

Many Jewish causes are pursued by asking for money in order to influence and shape policy. Why is that embarrassing or anti-Semitic? If I was to respond to Omar, I would say something like: “Jews in America care deeply about Israel and its need for safety in a dangerous world. We want our representatives to understand the depth of our feelings for Israel; we support those that understand that. We are proud of our successes. That is how democracy works. Here in America, we don’t beat our critics to death, dismember them and put them into suitcases. We don’t have baksheesh here; all our fundraising is transparent. What about our democracy do you not understand?”

Dual Loyalty. Boy, did the liberal Jewish Democrats fall into a trap on this one. Of course American Jews have dual loyalty. I do. I love many things about this country, and I love many things about Israel. My Italian, Irish, Polish and Puerto Rican friends feel the same way about their “homeland.” Why do you think Fifth Avenue has so many parades? Unless you are part of the Daughters of the American Revolution, (DAR—and even they came from England), you came from somewhere. Most Americans are hyphenated. They wish the best for the lands from which they descended.

I would have answered Omar with this: “Other than Native Americans, most of us come from somewhere else. As American Jews, we feel a bond with Israel in the same way that countless other ethnic/religious groups do with their ancestral lands. We are proud that in a democracy like America we are free to feel and express that bond and to share that feeling with our fellow citizens. What about that do you feel is worthy of criticism? Do you not understand that this has been the American way since the founding of the Republic? This is not dual loyalty but a natural expression of one’s humanity.”

So, my advice is to toughen up. Stop playing into her sad hand. She is making the American Jewish community look like a reed in the wind. We are stronger than that. Respond to her comments with factual rebukes. Point out that she is giving good cover to brutal and oppressive regimes that desperately need the distractions she provides.

Lastly, by not being so thin skinned, the American Jewish community can put her on the defensive.  Call her out for not criticizing the male-dominated and repressive culture of which she is a part. Point out she may have a hard time understanding and adjusting to America and its democratic norms. Offer to show her the way. 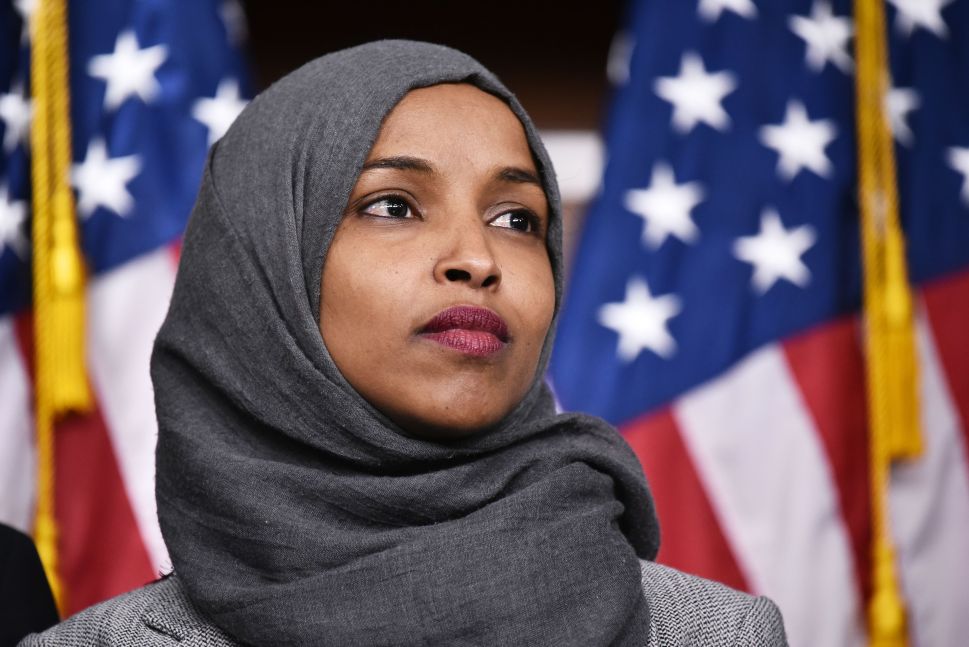