Superheroes have enjoyed infinitely greater success in movies, TV shows and, well, comic books, than they ever have in musicals. Popular strips and graphic novels have translated—look at Annie and Fun Home—but actual caped crusaders? Theater is their Kryptonite. In 1966 the campy It’s a Bird…It’s a Plane…It’s Superman closed fast. More recently there was a modest failure called Spider-Man: Turn Off the Dark—which still causes critics to wake at three in the morning thrashing and screaming. So you almost have to admire book writer John Logan and composer-lyricist Tom Kitt for undertaking the subject in the (blandly titled) Superhero.

Except I’m not sure they really care about the genre. Produced at Second Stage Theatre—which also presented Dear Evan Hansen and Next to Normal (the latter scored by Kitt)—Superhero wants to blend a broken-home weepie (like those earlier titles) with something magical and pop-culture-y. Recently widowed Charlotte (Kate Baldwin) is a literature professor juggling career, grieving and raising moody teen Simon (Kyle McArthur). They’re both still raw from the loss of a husband and father, who died in a car accident with Simon present.

When not pining over his perky, eco-activist schoolmate, Vee (Salena Qureshi), Simon spends his time on the fire escape, sketching the adventures of “The Amazing Sea-Mariner.” Our geeky comix fan soon fixates on the stranger in 4B, Jim (Bryce Pinkham), a bus driver who keeps to himself and barely talks. Seeing Jim impulsively punch a fire hydrant into a pancake, Simon concludes that the weirdo next door has secret superpowers.

Now come spoilers, which I must include so you’ll keep reading this exasperated review of a mediocre musical. After an unnecessary intermission, we learn that Jim is indeed a superhero. Wow! Cool, right? Nope. A sort of first responder from another planet, Jim transforms himself into an energy beam and speeds around the world to help those in danger when he hears plaintive psychic cries. Often he doesn’t get there in time, so he can only save, say, half the victims in a bus crash. In other words, he’s a depressed extraterrestrial volunteer who has a negligible effect on the relative amounts of suffering and goodness in the world. Captain America wept.

I wish Logan and Kitt had delved more imaginatively into the subject. What about musicalizing the life and loves of a real masked superhero—not a half-baked cipher as a metaphor for finding inner strength in the face of personal tragedy? Pinkham does a fine job instilling the awkward, lonely Jim with human emotions, as contact with Simon and Charlotte draws him out of his spaceman shell. But the whole show’s premise is a MacGuffin; Jim’s a Magical Martian, there to enable the growth and healing of the damaged humans.

At least the marvelous Kate Baldwin is on hand to milk every rueful laugh or shimmering note from her role. Baldwin has one of Broadway’s most supple sopranos, a velvety, golden sound that’s equally suited for old-fashioned work (Hello, Dolly!) and the kind of neurotic pop that Kitt writes. She’s got comic chops to spare, yet can break your heart as required. And once her character enters into a relationship with a guy who might be, um, different—she can pull off a song like “It Happens to You,” a dreamy ditty how her life might change. “I’d be scared to death of the bedroom,” she frets. “I’d be holding my breath in the bedroom… / Hoping and praying it’s everything I dreamed it would be! / A supersonic otherworldly feeling in me that won’t ever fade. / That won’t let me down. / That won’t go away again.” At such moments, Baldwin’s warmth and wit elevates the material to a more adult, resonant level.

But the piece also wants to have teen appeal (as if musicals weren’t already infested with juveniles.) The young and intense McArthur makes Simon a plausible kid of a crucial emotional shift. And he proves that adults playing high-schoolers does not have to be soul-killingly tacky (I’m looking at you, Be More Chill). Kitt’s score, while skillful, suffers from too much mid-tempo pop balladry, and could use more variation, weirdness, especially as regards Jim. Let’s hear some freaky space patter! In the end, all the creative team wants is for mom and son to sing their hearts out on the rooftop and embrace in a big, unearned act of closure. Through sheer charisma and talent, Baldwin and McArthur may wring a tear or two out of you, but that doesn’t necessarily mean the good guys won. Superhero: Save yourself. 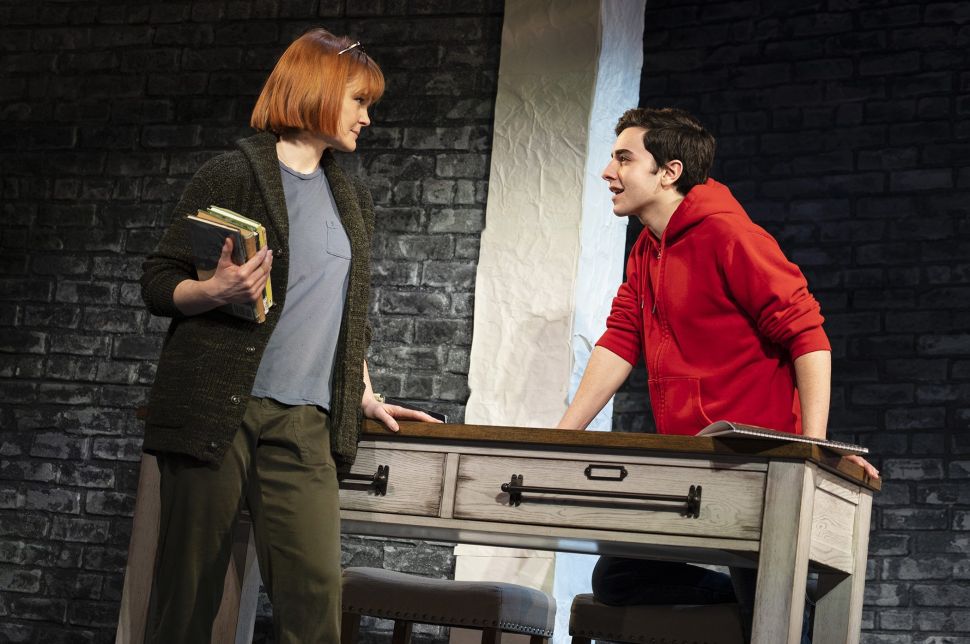