Upper East Siders and Harlemites are now breaking fufu together, dining at the newly opened Teranga cafe, located on Central Park’s northeast corner. Teranga opened last month and features West African cuisine, from kelewele (AKA spicy fried plantains) to occasional specials like the traditional Senegalese fish and rice dish, thieboudienne. The brains behind the operation is chef-owner Pierre Thiam, an immigrant from Senegal who landed in the city nearly three decades ago and has remained on an unplanned extended stay ever since.

Inside Teranga—a contemporary space on the ground floor of the future Africa Center building, officially 1 Museum Mile—diners eat at sleek communal tables. The diverse crowd spans all ethnicities, ages and countries of origin, with a smattering of Afro-punk types, academics, artists and families with young toddlers.

Thiam chose a fast casual format for Teranga. Customers order food bowls at the counter from options like roasted salmon with spices, or a beet colored grain salad with carrots, or an okra stew, which are displayed in colorful enamel pots, pay and eat at one of the large tables. The space is bright, airy and lively with customers eating, talking or reading as music plays.

Over the three decades since Thiam’s accidental arrival in New York City, he’s been presenting New Yorkers with West African cuisine and culture through his restaurants, catering, cookbooks and importing the gluten-free grain fonio. Teranga is his latest endeavor.

On a recent afternoon, as a piano was tuned in preparation for that night’s jazz concert featuring South African artists Thandiswa Mazwai and Nduduzo Makhathini, Thiam spoke with Observer about launching Teranga and the unifying power of food.

First, what does “Teranga” mean?
In the Wolof language it means “hospitality.” Teranga is how you treat the person who comes into your home, even if that person is not expected. In Senegal, we eat around a bowl, so you can always make room for a new person. Teranga is valued at the highest level in Senegal, if you tell someone he doesn’t have teranga, it’s really hardcore!

And Teranga’s food?
It’s primarily West African, even though I take inspirations from other parts of the continent. It’s healthy food, vegan-friendly, gluten-free. It’s “make your own bowl,” which I think is a more approachable way to introduce African food to New Yorkers.

I make traditional dishes like ndambe, which is a black-eyed pea, sweet potato and okra stew, it’s comfort food, called peasant food in Senegal. I serve fonio in many ways, with beet and pickled carrot in a salad, and I make a jollof fonio, jollof is a dish you see in many parts of West Africa, but traditionally made with rice.

The jollof wars! Isn’t there a battle, who makes the best jollof?
There’s a serious battle! Nigerians want to make the best jollof, Ghana is saying the same thing. But it’s a good battle; it just shows the importance of food in culture. It’s refreshing, I mean, music albums came out of this jollof battle. Jollof did originate from Senegal.

There are Ethiopian restaurants in the U.S. and most Americans are familiar with some North African foods, but not from other parts of the continent, including West Africa. Why?
There are many ways to answer that question. West Africans [slaves] did bring their food to the U.S., which has been adopted by a big part of the population, especially in the South. But it’s never been recognized or connected to Africa—jambalaya is like jollof, gumbo is like our okra stew. African-American communities are West African in origin, so this food is familiar, yet it’s new.

Another reason is also the fact that we haven’t branded our food the way this capitalist system is requesting it to be branded.

How has being a Senegalese immigrant formed your career?
I’ve been exposed to two different cultures, which gives me an advantage. I’m Senegalese and American, I’ve lived a big part of my life here, but I never wanted to disconnect from my culture. I’m grateful for that because it’s my inspiration. I don’t really invent anything, I just go back to the source and bring it here—whether it’s the ingredients, or the recipes, or the stories, or the culture.

How did you get into the New York City restaurant business as a young immigrant from Senegal?
I had been studying physics and chemistry at Dakar University, but the whole school system shut down because of a strike. I was fortunate to get a visa and I was supposed to attend a small school in Ohio called Baldwin Wallace College—the name is all I know about that college [laughs]. I came to New York City to visit a friend on my way to Ohio, big mistake—maybe not when you think of it!

During this visit, I stayed at a hotel with a Senegalese community on 50th Street. New York was different at the time [laughs]. The hotel was home to a bunch of society rejects, crack heads, hookers. We shared bathrooms, so you’d see needles on the floor in the morning. It was just horrible, and the rats… When I saw this, I was like, “This is America?”

Three days later, all my money was stolen. So, I immediately started my first job as a restaurant busboy. I was still trying to save money to go to the college, so I started washing dishes for the extra shifts. I hated it. But, as I spent more time in the kitchen, I started to admire these guys cooking; men don’t cook where I’m from.

The chef saw my curiosity, thought he saw talent and said, “OK, I’ll add some hours and you’re going to peel onions and potatoes.” I started doing that and the rest is history.

A natural progression all the way to opening Teranga?
I worked in restaurants that served American, classic French bistro, Italian cuisine, but one chef I worked for early on changed everything for me. He showed me that paying attention to cuisines from the developing world was much more interesting. I thought, “Oh, if he can do it with Southeast Asian cuisines, I could do it with West African cuisine.”

But you haven’t exclusively been a restaurateur this whole time, you also write cookbooks.
Yes, my first cookbook Yolele! [which means “let the good times roll” in Wolof] was a way to introduce the reader to the foods I grew up eating, which inspires my cooking today. Then, I wrote Senegal: Modern Recipes from the Source to the Bowl that gives homage to the farmers and fishermen in Senegal. It was a James Beard Award finalist, best international book. I’m working on a new book, a single ingredient cookbook about fonio.

What’s so special about fonio?
It’s a gluten-free grain that’s very rich in two amino acids, cystine and methionine, important for human growth. Fonio also scores low in the glycemic index, so it’s recommended for people suffering from diabetes and celiac disease. Fonio is really easy to prepare; you can cook it like rice or steam it, serve it like couscous.

I came to Teranga the other day and it was packed with an extremely diverse group of customers, is that intentional?
Totally. I always hope for my food to play a unifying role and it is. For example, today I had a table, two young African-American girls who came from Washington who heard about the place. Then, there’s a white guy across the way, and they’re striking up this conversation—they became really good friends! When I arrived, the white guy, who is a regular here, calls me over and introduces me; we are having this beautiful event. It’s just the kind of thing that can only happen in a setting like this. 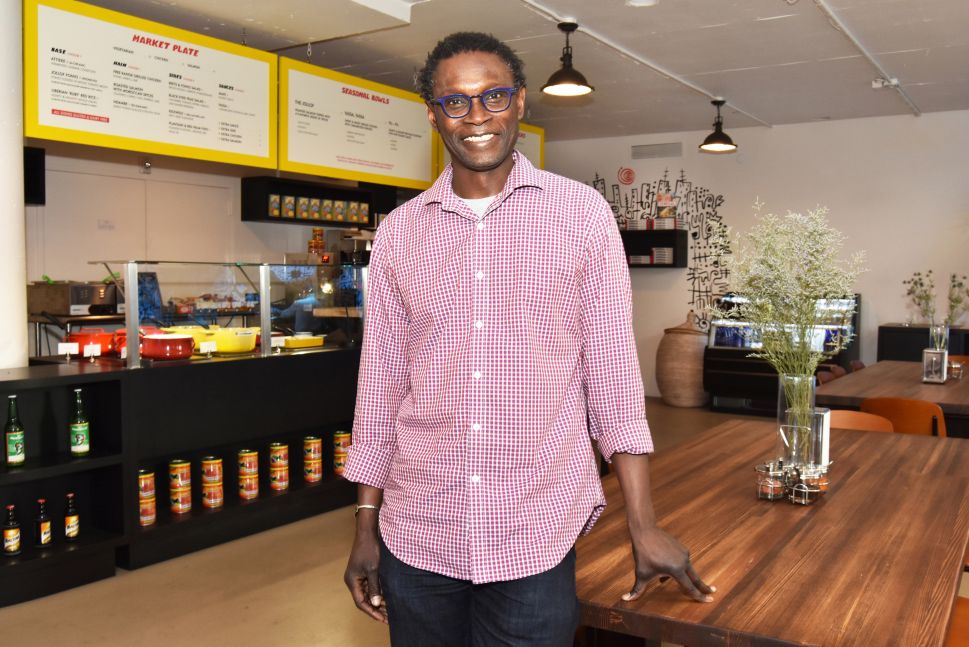