There are so many noble intentions on view in the romantic postwar tearjerker The Aftermath that I sat through its strong emotional tug wide awake and really wanting to go away with a feeling of admiration and gratitude. Instead, I felt empty and wanting. I think I have to admit this is a mixed review.

The plot is simple in execution, but deeply complex and troubling between the lines. Hamburg, 1946, shortly after the end of World War II. The British military arrives in Germany to reconstruct and repatriate what’s left of the bombed-out country. Colonel Lewis Morgan, a British officer (the versatile Australian actor Jason Clarke, so good as Ted Kennedy in Chappaquiddick) and his beautiful but reluctant wife Rachel (Keira Knightley) move to one of the most beautiful surviving estates in the city.

Neither has recovered from the loss of their son in the German bombs that fell on London during the Blitz, so Rachel harbors a deep resentment against the German people. But Lewis, who has also carried around the burden of a broken heart that is now beginning to destroy his marriage, has more compassion for the German people than his wife, so as a gesture of kindness, he invites the dispossessed owners of the house to remain.

Stephen Lubert (Alexander Skarsgård) was a respected architect who also lost his wife to the British air raids. Now he has been reduced to a menial job as a factory worker. His teenage daughter Freda (Flora Thiemann) is all the family he has left. Although her father was never a Nazi, Freda is a rebel who hates the British invaders. They co-exist for a time, avoiding each other while Rachel loses herself in the music she plays on Stephen’s grand piano.

Gradually, though, because they are left alone so much in the house and because they share so many similar losses, Stephen and Rachel grow closer together and their friendship turns to a mutual need for sex and love. Everyone relieves loneliness and pain in different ways. Rachel and Stephen plan to start a new life together. The melodrama begins.

The melodrama, unfortunately, is not always convincing. The quality of the acting is so strong that the emotional impact is undeniable. Knightley is so gorgeous, Skarsgård, the Swedish heartthrob, is so decent, and Clarke is so noble in the way he hides his vulnerability, that I liked them all.

The cinematography is so beautiful, the performances so carefully modulated, the emotions so gradual and the direction by James Kent so controlled that I found myself swept into the vortex of the love story in spite of myself. I also felt the need going in for the feeling of lush romanticism that seems so sadly missing in most of the movies I suffer through these days.

And yet, the elegance outweighs the logic. The people are too good to be true. They change too fast, they fall in love too easily, they ignore and deny their entire history of DNA to feel needed, wanted and safe. I left with endless troubling questions unanswered. The melodrama turned shallow. I loved the beauty and tenderness, but I didn’t believe The Aftermath. 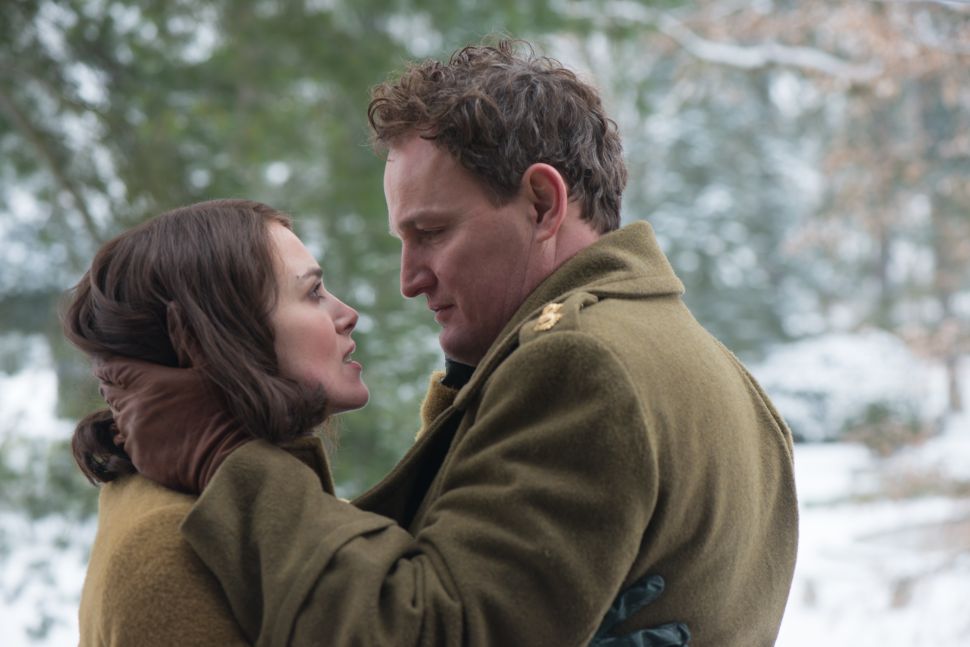