Seeing The Cake, a new play at New York’s venerable Manhattan Theatre Club, you want to eat the stage. Designed by the great, much honored and always imaginative John Lee Beatty, the setting is Della’s Sweets, a popular bake shop in Winston-Salem, N.C., that specializes in beautiful, elaborate, calorically challenging, lavishly decorated Technicolor creations displayed in glass cases and ready for their close-ups.

The owner is a jolly, round-faced Southern belle named Della (a perky Debra Jo Rupp) who has devoted her life to red velvet, angel food and pineapple upside-down cakes. Della has opinions about everything, which she dispenses freely, ready or not. She has no use for anyone who lives on yogurt or claims to have a phony allergy to gluten, and if you want to really offend her, ask her about the dangers of sugar. Della keeps you laughing for a while, but while her cakes are light as soufflés, the play that showcases them is a batter that fails to rise.

The Cake, written by Bekah Brunstetter, may be easy on the eyes and charming to the ears, but the theme is racism. When Jen (Genevieve Angelson), a pretty vision of wholesomeness and the daughter of Della’s deceased best friend, returns home from a career-girl life in New York and tells Della she’s getting married, the cake lady explodes with exciting ideas for the most spectacular wedding cake of her life.

Until, that is, she meets Jen’s intended wife Macy (Marinda Anderson), an African-American woman on an obnoxious health-food diet who loses Della forever when she insists America’s fondness for sweets is creating a new generation of children “practically born with diabetes.” Della’s joy crumbles visibly and fast.

With all due respect for her old friend Jen, she simply cannot reconcile her sense of Christian morality with her passion for buttercream frosting. When push comes to shove, she simply cannot bring herself to bake a cake for a same-sex wedding ceremony. Della’s husband Tim (Dan Daily) is even worse. “It’s not normal,” he scoffs. “Neither is confectioner’s sugar,” counters Della, but she uses it anyway.

The idea is based on recent news reports about actual cases involving bakers who refuse, on religious grounds and personal values, to serve same-sex couples. Surprisingly, the U.S. Supreme Court has ruled against the customers, in favor of private business interests. And so The Cake is a play about our changing world that tries to understand every opinion in it, leavening the underlying seriousness with laughs. The comedy only works intermittently. Most of the time, I just wanted to strangle everyone onstage, including Della.

Eventually, the author’s backbreaking determination to make everyone lovable leads to some happy-ending compromises I found unconvincing. Della ends up baking the wedding cake against her better judgment, and her guilt leads her to question what’s been missing in her own value system. Tim tries to make up for lost time in their stagnant sex life by posing in bed with his privates covered with mashed potatoes.

Jen’s own Southern upbringing forces her to forgive everybody, as though bigotry and homophobia are nothing more than figments of an overactive imagination. Strangest of all, it is the rigid, humorless, rueful Macy who softens the most by bringing Della a slice of the wedding cake. Directed by Lynne Meadow, The Cake ultimately doesn’t provide much nutrition to take home. Reduced to crumbs, its values belong in a doggie bag. 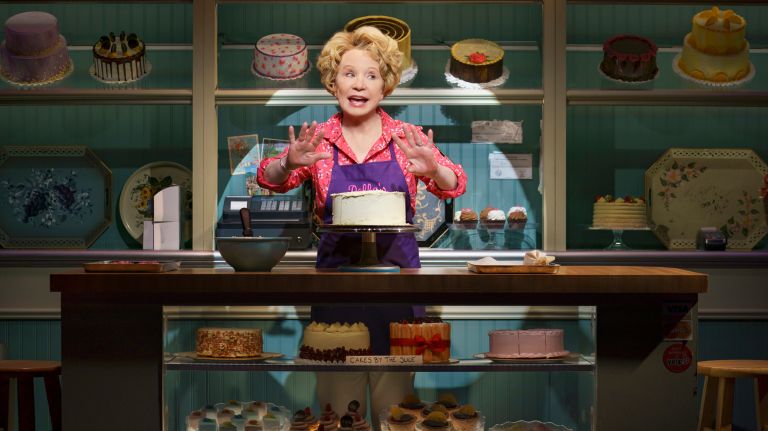