Reviews might be “mixed,” but don’t let that deter you. The Chaperone is a fascinating, exquisitely made film about the early life of sultry silent-screen star Louise Brooks, who traveled from Wichita, Kan., in 1922 to New York City with a proper chaperone named Norma Carlisle. Having already appeared in local dance recitals accompanied by her mother on piano, Louise was accepted by Denishawn, the famous modern dance company founded by innovative dancer-choreographers Ruth St. Denis and her husband, Ted Shawn.

The movie is about the adventures on the trip experienced by a mismatched 15-year-old girl with an already fully developed, overripe libido and the proper Presbyterian wife and matron recruited to look after her. Both learned lessons that changed their lives forever.

Elegantly photographed with period Jazz Age splendor by Nick Remy Matthews and delicately directed by Michael Engler, the intelligent screenplay is by Julian Fellowes, the distinguished Oscar-winning writer of Gosford Park, not to mention the hit drama series Downton Abbey. The result is a film of uncommon rapture, albeit one with little of the noisy, fast-moving action contemporary audiences have come to expect. Personally, I think it could benefit from more pacing. Still, the story is compelling and no scene is ever sacrificed for the sake of cheap effects.

Knowing the kind of glamorous future Louise Brooks had ahead of her, I accepted her reckless pursuit of men, sex and Prohibition alcohol as stepping stones to stardom. It is the chaperone, about whom little is known and a lot is revealed, whose personal narrative dominates attention. Louise is a handful, and Haley Lu Richardson plays her vivacity with delectable candor and humor.

But while she breaks rules, defies authority and tramples conventions in sinful Manhattan after dark, the trip provides Norma (played with lovely nuances by the patrician Elizabeth McGovern) with an opportunity to visit the Catholic orphanage where she was adopted as a child and search for clues to her identity, with the aid of a man named Joseph Schmidt (Géza Röhrig, the terrific Hungarian actor who won rave reviews as the concentration camp hero in Son of Saul).

A German interred in an American World War I camp down in Georgia, Joseph, upon release, found his wife dead and his daughter living in the convent. The nuns kept him on as a handyman. With his help, Norma finds and steals her adoption papers, which leads to a poignant reunion with her birth mother (played with her usual burst of energy by Blythe Danner), who now has two grown sons, both politicians, and a prominently married daughter, but refuses to introduce Norma to them, ending her hopes for a happy future together with a long-lost family of her own.

With accidental mentoring by the willful Louise, who is busy discovering the forbidden thrills of gin and fast becoming a flapper in a speakeasy where the great Lillias White sings “I’m Just Wild About Harry,” Norma gains enough self-confidence to turn the tables on her own rigid set of morals, crafts Joseph into a sexual conquest of her own and throws away her corset forever.

In a postscript 20 years later, back home in Kansas, Norma and Joseph share a house with Norma’s husband, Alan (Campbell Scott), and his male lover Raymond (Matt McGrath) in an unconventional living arrangement that must have shocked Wichita squares to their saddle oxfords. Into this nest of tranquil liberation, Louise returns home—broke, bruised, battered and a disillusioned drunk who has fallen on hard times, her legendary movie career abandoned after the dazzling success of Pandora’s Box. Now it is Norma who takes it upon herself to play role model, improve somebody else’s life, and recharge the batteries in Louise’s future.

Among the many hypnotic sidebars in this sublime film is some electrifying choreography between Louise and dance instructor Ted Shawn, played by the New York City Ballet star Robert Fairchild. Actual film clips from Louise Brooks classics add perfect footnotes. The music runs the gamut from Debussy and Chopin to Vince Giordano and the Nighthawks. Fellowes’ dialogue tells you everything you need to know about the characters with sensitivity, nuance and understated wit. The Chaperone is a movie to savor. 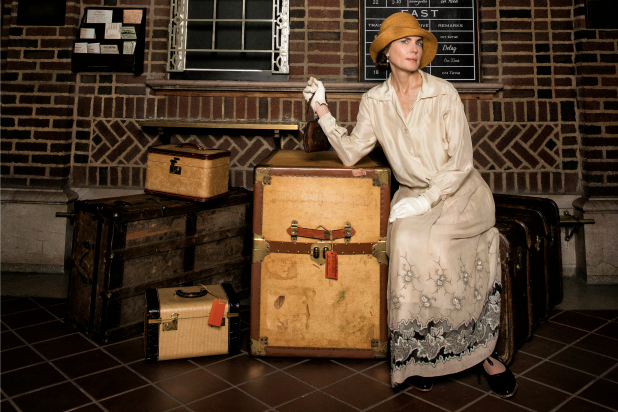