On Monday night, HBO aired the two-hour documentary The Inventor: Out for Blood in Silicon Valley, a much-anticipated companion piece to the gathering slew of fascinating investigative stories about Theranos founder Elizabeth Holmes. In 2018, Holmes was indicted and charged with federal fraud several years after the Wall Street Journal’s John Carreyrou initially reported that her company’s game-changing technology, which was supposed to be able to run hundreds of different medical tests using only a single drop of blood, wasn’t functioning.

For diehard followers of the Theranos saga who’ll gobble up any and all scraps of new information, The Inventor contained little that hadn’t previously been explored in Carreyrou’s excellent book Bad Blood: Secrets and Lies in a Silicon Valley Startup and in the longform ABC podcast The Dropout. One exception was the film’s focus on an ad that was produced as part of a Theranos collaboration with Walgreens, which showed an elderly woman moved to tears by her daughter’s concern for her health.

The ad’s purpose was to promote Theranos gift cards, which got us wondering about the physical evidence of the company’s existence and where it had dispersed to—sample processing units, paperweights branded with their logo, etc. Few physical objects that the company manufactured are readily available, but what we found was that new, Theranos-branded merch is now being made.

The online retailer Redbubble, which sells trendy merchandise based on user-submitted designs, offers more than 55 products bearing the Theranos logo on its platform, all of which appear to have been made by a prolific designer (or team of designers) going by the name Millennial Society, or MillSociety for short. It’s not clear whether anyone at MillSociety is associated with Theranos (they did not respond to Observer’s request for comment by the time of publication).

Anyone who’s ever sold “Yankees Suck” shirts to Red Sox fans knows that there’s a great deal of money to be made in manufacturing goods that play into an ongoing controversy, but still, it’s a little bit jarring to scroll through dozens of images of young, smiling models outfitted in flattering Theranos attire. There are Theranos v-neck T-shirts, hoodies, travel mugs, tote bags and iPad cases. There’s a Theranos wall tapestry, a Theranos clock and Theranos postcards. There’s a hardcover Theranos journal. For the true die-hard Holmes-obsessed, there’s even a provocative Theranos mini skirt; a total steal at $33.84. From a Florida-based business called Sunshine T Shirts, you can buy a sporty t-shirt bearing the phrase “I think my soulmate is Elizabeth Holmes.” Sunshine also offers a shirt that reads “It’s an Elizabeth Holmes thing, you wouldn’t understand.” My personal favorite, though, is MillSociety’s Theranos duvet cover. It’s perfect for insomniac scammers-in-training.

But wait, as they say; there’s more. On eBay, a highly-rated seller has listed a “Drucker Theranos Programmable 6-Tube 6500 RPM Centrifuge,” which bears the Theranos insignia and appears to be a laboratory device like the kind used by the company to prepare blood samples for testing. “Centrifuge has been tested working onsite!” the eBay description reads. “Centrifuge has wear from previous use including scuffs and scratches. Unit also has some wear on the seals.” The machine has been priced at $499.99, and is listed as being currently located in Rancho Cordova, California.

Theranos was once a company that was worth billions of dollars, so it seems logical that bits and pieces of its physical existence are both tangible and available for sale to the highest bidder, but there’s an eerie quality to these objects all the same.

This might be because Holmes’ staggeringly brazen conduct during her years as the CEO of Theranos has persisted as she awaits her day in court. Despite being accused of both hoodwinking investors out of billions of dollars and deceiving hundreds of physicians and patients (potentially putting them in harm’s way), Holmes has remained stoic, inscrutable and even visibly cheerful; acting for all the world like a squeaky-clean upstart just biding her time between projects.

Ultimately, the Theranos logo doesn’t belong on coffee mugs or medical devices because the idea that Theranos represented never actually existed: the company was an elaborate cloud of hot air, laced with just enough Elizabeth Holmes magic to convince the right people their work was both solid and groundbreaking. It’s natural to be fascinated by this still-unfolding story of corporate intrigue and technological incompetence, but in the age where everything you’re obsessed with can be worn on a sweatshirt, the Theranos scandal demonstrates that some obsessions are too complicated to be screen-printed. 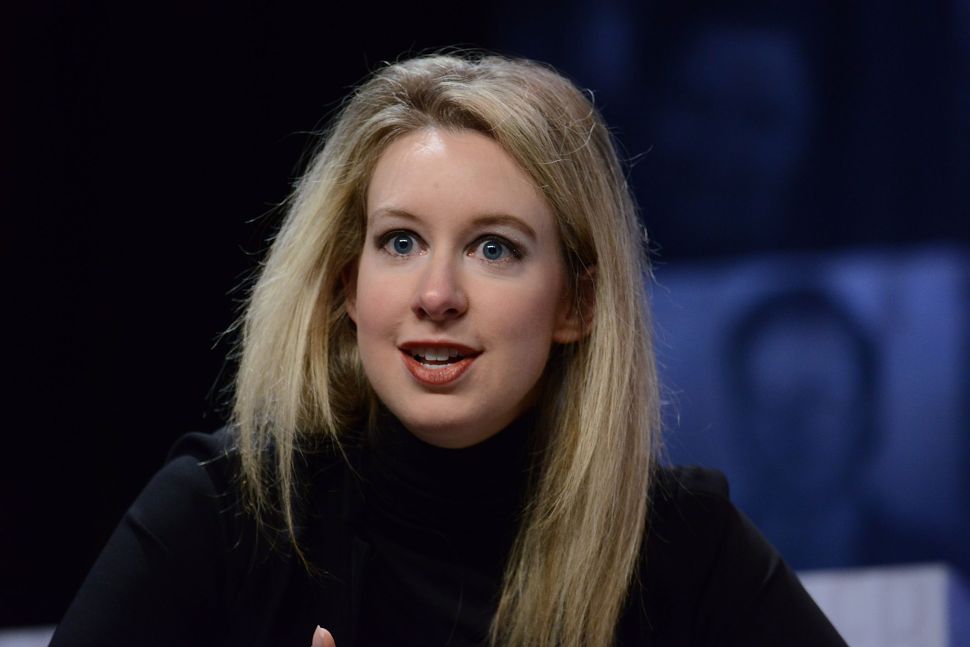