President Donald Trump’s executive order protecting free speech on college campuses has alarmed academia. While details surrounding the declaration are scarce, educators fear the White House is attempting to regulate discourse across U.S. college campuses via federal funding. With many researchers still reeling from the government shutdown, Trump’s threat of pulling federal funds from universities seems all the more alarming—especially since many could not pursue their subsidized projects in the interim.

In theory, a proclamation of free speech encourages intellectual diversity and fosters healthy debate. But professors we spoke to warned that the Trump administration’s education policy could have long-lasting consequences for the First Amendment if implemented.

Here are the points of contention with Trump’s latest executive order.

“He took a hard punch in the face for all of us,” said the president to cheers.

Williams, however, is not a college student, nor was his alleged attacker, Zachary Greenberg. Williams is a field representative for the Leadership Institute—an organization which trains young conservative activists. A UC Berkeley spokesperson has said that Williams “had every right to be on campus, and every right to express his view.” But some professors are disputing the president’s framing of the incident as basis for an executive order, especially since neither Williams nor Greenberg are associated with the university.

“Federal intervention on campus is an overreaction and overstep that’s not justified by the facts on the ground,” Don Moynihan, a professor of public policy at Georgetown University, told Observer. “[Trump] justified this action by introducing a conservative activist who had been assaulted on the Berkeley campus. What he failed to mention is that the person who punched the activist was in no way affiliated with the campus. Or that Berkeley spent $4 million last year to secure the freedom of controversial speakers to speak on campus.”

Using Berkeley as a stand-in for all colleges is also questionable, given the university and city’s longstanding history with social activism.

The Leadership Institute did not respond to Observer’s inquiry.

On some college campuses, students, speakers and faculty members (many of whom might identify as conservative) have been attacked for their political views. In March 2017, American Enterprise Institute (AEI) scholar Charles Murray was accosted by a group of violent student activists at Middlebury College. Most recently, Sarah Lawrence professor Sam Abrams (who is also a fellow at AEI) had his office vandalized following an op-ed published in The New York Times highlighting a left-leaning bias among college administrators.

“There are things that happen on campuses to conservative speakers, to conservative professors, to conservative students that shouldn’t happen,” Jeremy Mayer, a media and public policy professor at George Mason University, conceded to Observer. “These cases deserve responses, whether that’s criticism or some donors saying they’ll stop giving to the college.”

But Trump did not touch on these types of incidents in his CPAC address. Nor did he point out the smaller religious institutions known for limiting certain types of speech—such as Catholic University, which in 2004 banned pro-choice speakers from speaking on its campus.

“Operationalizing this executive order is almost impossible to imagine being done right or well,” continued Mayer. “There are a lot of schools which rely on federal student aid and federal funding that are very discriminatory against liberal speakers by a policy. The conservative discrimination against speech tends to be more organized and set and happens on private campuses. The left-wing discrimination tends to be more social and emerges from the student body and tends not to be official.”

Could Lead to Federal Regulation of Campus Discourse

Perhaps the biggest concern among educators is that Trump’s executive order will regulate free speech on college campuses. Following the president’s announcement at CPAC, University of Chicago president Robert Zimmer wrote a letter calling the declaration “a grave error for the short and the long run.”

“It makes the government, with all its power and authority, a party to defining the very nature of discussion on campus,” warned Zimmer. “A committee in Washington passing judgment on the speech policies and activities of educational institutions, judgments that may change according to who is in power and what policies they wish to promulgate, would be a profound threat to open discourse on campus.”

Even professors who have been harassed by leftist agitators are coming out against Trump’s declaration, and sounding the alarm on an overreaching executive branch.

“I appreciate the fact that the president wants to talk about free speech, but an executive order seems a little strong and a little heavy handed,” Sarah Lawrence political science professor Sam Abrams told Observer. “There’s widespread agreement among professors that this is not something we want to create more bureaucracy and red tape around. It grows the government.”

In addition to risking further regulation, too many executive orders can also lead to perpetual volatility in government on certain policy issues—such as with immigration.

“Executive orders are not great ways of making policy because they can be rolled back,” continued Abrams. “While various orders that I personally admire, such as turning certain lands federal and making them protected wildlife zones, are appealing, they can be retracted very easily and can create fairly unstable legislative regimes. Over time, the law that stands are things that have gone through Congress.”

Given Trump’s propensity for chastising media outlets and members of the press, professors worry the president does not actually value the First Amendment, and is instead using an executive order for political purposes.

“This is a president who has called a free press the enemy of the people and urged violence against protestors,” said Moynihan. “True conservatives should worry about having the White House police campus speech. What we see in authoritarian regimes like Turkey and Hungary are leaders regulating campus speech to shut down people who disagree with them. It’s worrying to see the U.S. move in the same direction.” 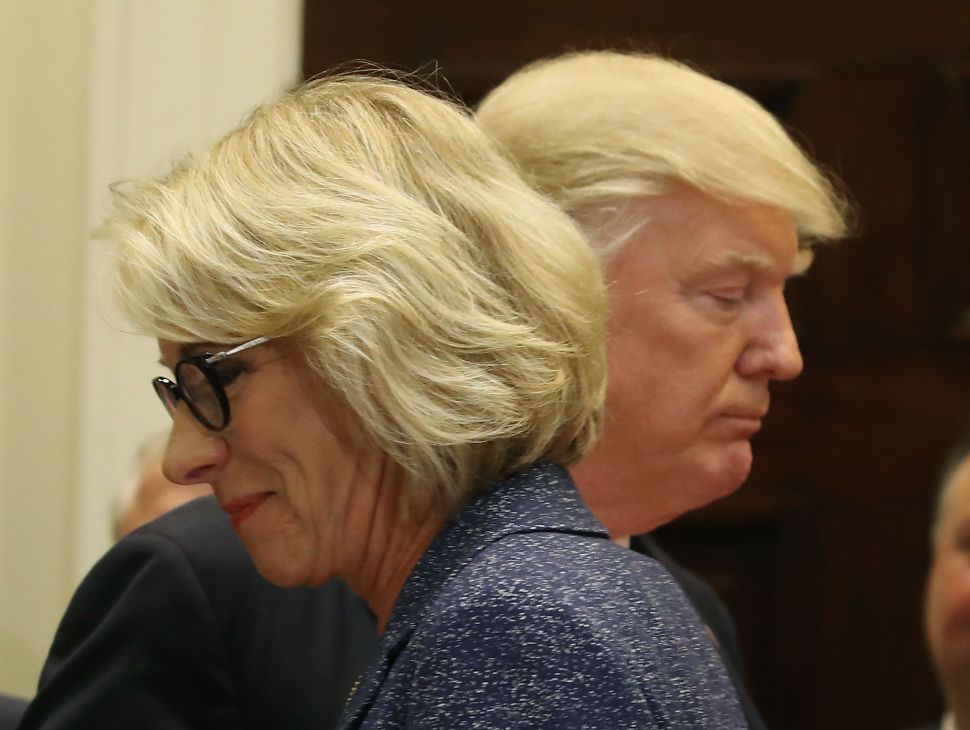