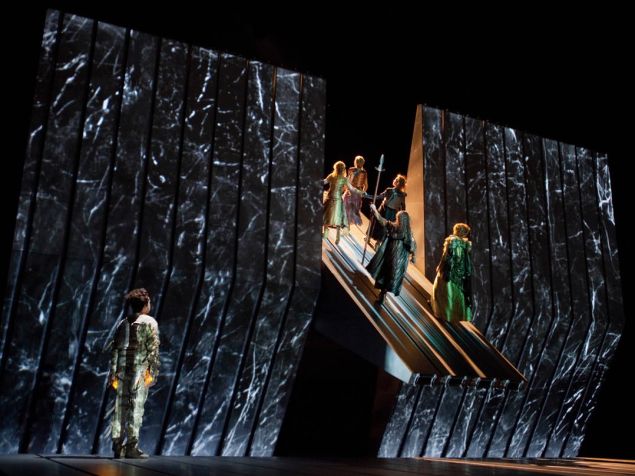 Gods ascend to their castle Valhalla in Wagner’s ‘Ring’ at the Met. Ken Howard / Metropolitan Opera

Before surging into its gala, novelty-intense and user-friendly 2019-2020 season, the Metropolitan Opera has one more dazzling exploit to pursue this spring: a series of performances of Wagner’s Der Ring des Nibelungen, possibly the longest and certainly the most ambitious opera project in all of human history.

The Ring is a “cycle” of works, meaning it requires more than a single visit to the theater to take in its complete grandeur. The Broadway epics Angels in America and Harry Potter and the Cursed Child each requires two nights to tell its story; the Ring sprawls over four performances throughout the course of a week.

To be fair, this piece tells a story on the largest imaginable scale: it’s both a myth and a generational saga spanning the creation and the destruction of the universe. And the main way that story is expressed is through Wagner’s intense, transcendent and deeply disturbing score.

But it’s not only a listening experience. Wagner called the format of the Ring and his other mature theatrical pieces “Gesamtkunstwerk,” which, despite sounding like the name of a death metal band from Stuttgart, actually means something very close to the American term “concept musical.”

As in, for instance, the definitive Broadway concept show, Sondheim’s Company, every element in the Ring is shaped to emphasize the overarching theme of the work. Company is about the disjoined, alienating nature of 1970s urban life, so the music mimics shallow pop songs and the scenes play like a series of TV skits.

The Ring‘s message, though, is much broader, dealing with guilt and the responsibility the younger generation has for redeeming a world damaged by their ancestors.

The tragedy springs from the ambition of the god Wotan, who sells his sister to a pair of giants as payment for the castle Valhalla they have built for him. Then he seeks to revise the deal, offering instead a cache of magic gold the Nibelung Alberich has stolen from the daughters of the Rhine River.

Eventually Wotan completes the bargain, but not before Alberich places a curse on the all-powerful ring that has been fashioned from the gold. The god realizes he can escape the curse only if he can find a hero to steal the gold from the giants and return it to the Rhine.

Over the more than 20 years it took Wagner to complete the Ring, his political and philosophical views evolved vastly. By the time the work premiered in 1876, the redeemer of the world was no longer the dragon-slayer Siegfried but rather Wotan’s daughter Brünnhilde, who, stripped of her godlike powers, gains human empathy through suffering. It is she who “reboots” the universe by triggering the Götterdämmerung, the Death of the Gods.

Enriching the structure of the drama is a series of narrative scenes, in which characters retell from various points of view incidents we have already witnessed. For instance, we see Alberich’s theft of the gold; then, later, we hear the story reported by Wotan, Alberich’s son Hagen and the impartial goddesses of fate, the Norns.

Binding the gigantic piece together is music based on the “Leitmotif,” a web of musical themes associated with specific characters and concepts in the drama. (The technique here is comparable to how John Williams used, for instance, the “Princess Leia, “Imperial March” and other motifs in the various Star Wars films.)

Wagner constantly varies these themes to layer additional emotional values upon the text. For instance, a motif denoting Nature first appears as a “nurturing” major-scale arpeggio sung by the innocent Rhine daughters…

… but transforms to a stately and forbidding minor-key version at the appearance of the goddess Erda, an embodiment of nature’s cold indifference to human life.

These two YouTube clips depict moments from a couple of the most innovative and penetrating productions of the Ring over the past half century. At the Met, alas, the dramaturgy is somewhat less rigorous. Robert Lepage’s staging, based around a massive and recalcitrant unit set, is not particularly imaginative; worse, it malfunctioned numerous times when it was first seen at the Met in 2012-2013.

Neither Zachary Woolfe (then reviewing for Observer) nor I (writing in the New York Post) had much positive to say about Lepage’s clunky spectacle. (My own experience was soured when the finale of Das Rheingold—pictured at the top of this page—simply failed to happen. Instead of majestically parading across a rainbow bridge, the gods just scattered into the wings, leaving behind what looked like the light show at a 1970s strip-mall disco.)

But the tragedy of the Ring ends with a glint of hope, and so in that spirit I will note that the Met has promised major revisions to the production, specifically to that infernal “machine,” and the casting includes such tantalizing names as Christine Goerke (Brünnhilde), Andreas Schager (Siegfried) and conductor Philippe Jordan.

And even if you can’t spare 18 hours or so for the theatrical experience, you have the option of hearing live performances of the four Ring segments (Das Rheingold, Die Walküre, Siegfried and Götterdämmerung) via the Met’s free live-streaming site.

In the meantime, I’ll be devoting a big chunk of my spring to seeing and hearing the world end. I’ll let you know how it turns out here. 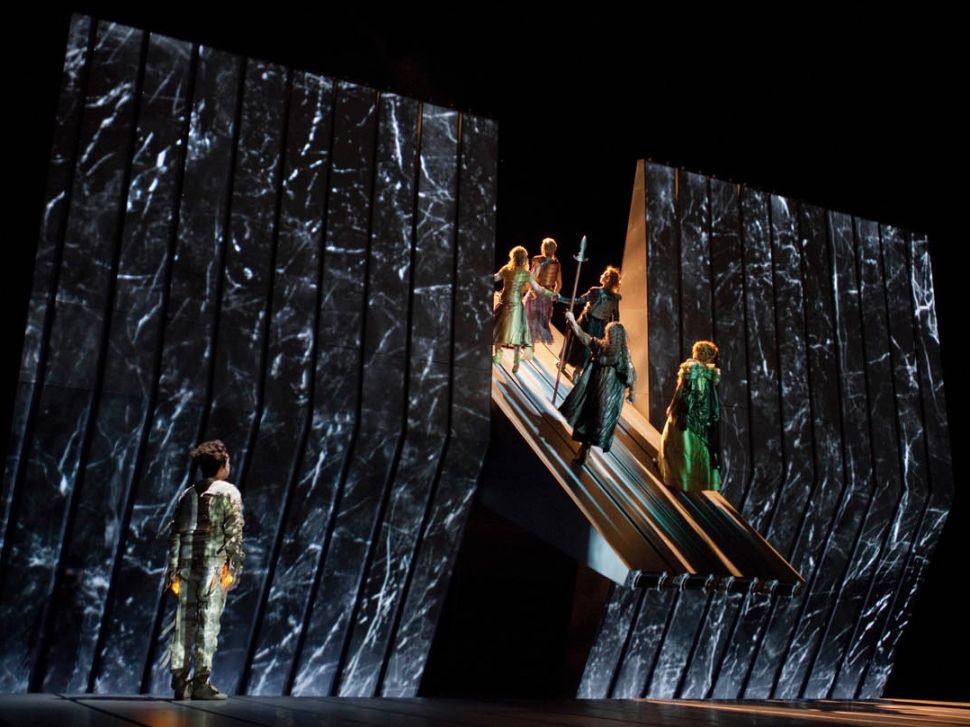