Earlier this week, while criticizing various Democratic presidential nominees’ acknowledgment that slavery was bad, America is still an unequal society because of it, and perhaps something more than “nothing” should be done, Fox News host Laura Ingraham used a turn of phrase that is becoming increasingly common in the Trump era.

Laura Ingraham says the Democrats seek "to replace you. Slowly but surely, with new voters" pic.twitter.com/raVL2qlvdu

Most of this is faithful to the Fox News script that a viewer transported from 2004 would recognize. Here is the usual deliberate distortion, twisted into a path toward the ritual flogging of conservative hobbyhorses: Taxes bad, immigrants bad, Democrats are radical, and the working-person is better off under Donald Trump than before.

Almost all of that is generic conservative ideology (the last point, that Trump gives a shit about “the little guy,” is a pernicious lie that can be refuted with quantifiable data). But then Ingraham adds some spice into the mix.

Democrats’ message just can’t win with normal American voters, she says. “So what’s their answer? To replace YOU”—and here she pauses ever so slightly for effect, while pointing a raised index finger at the camera—”slowly but surely, with new voters.”

Laura Ingraham appears on Fox News five nights a week in front of a reported 2.6 million people. A fair critique of Ingraham is that she is a professional troll—that is, she is extraordinarily well-compensated for a contribution to the discourse amounting to schoolyard-level provocation.

There is also widespread recognition that Ingraham is happy to use her pulpit to spout white supremacy, because she continues to do it even after condemnation from her own network. But this is a new frequency. This is different. Replacement. Displacement. An “other” arriving to take what is by rights yours.

This zero-sum analysis of the world should still sound familiar, because it is. What Ingraham did was paraphrase the chants of the Charlottesville white supremacists and one of the central messages of the far-right on a platform that everyone involved with the product constantly reminds us is “the most-watched cable news network.” This warrants mention because this is not the first time Ingraham has deployed this “replacement” line to a mass audience that is interchangeable with the Republican voter base. In fact, versions of “they are coming to get you” has become a stock phrase.

Here she is in mid-October, amplifying the anti-Semitic conspiracy theory that George Soros, or somebody, was behind the caravan of “chain migrants” approaching the southern border. Ten days after Ingraham spoke those words, on October 27, a white man who believed Jews were behind the caravan walked into a synagogue in Pittsburgh with an assault weapon and killed 11 people.

And here, courtesy of Media Matters, is the former talk-radio host on her podcast. “The Democrats want to replace many of you with new voters—who eventually they will give amnesty to—to new voters who have no real affinity for the American founding,” she said. “When you come illegally to a country, you immediately disrespect the laws of the country.” The fear of “other” people displacing white people appears to have weighed heavily on the mind of the white man who walked into mosques last week in New Zealand, where he murdered 51 worshipers.

This is to say: the rhetoric—often originating with Donald Trump, other times originating with the outre white supremacists who support him, which is amplified on Fox News, then turns up in the manifestos of white people who commit mass killings in the name of white supremacy—is the central tenets of the “14 words,” the perceived need to “secure a future” for white people.

This is not a hard line to draw. It is glaring. Nor is the conclusion that violent rhetoric lowers the bar for the commission of violence difficult or controversial.

It is not possible to declare without qualification or significant disclaimers that “Donald Trump inspired the Pittsburgh shooter” or “Laura Ingraham’s words are getting people killed”—nor is it clear that positing such would survive a libel claim—but according to social scientists I talked to last fall, after the Pittsburgh massacre, we absolutely live in an era where violent speech is encouraging violent acts.

“All human behavior is multi-determinant—there’s not just one cause for anything,” James Gilligan, a psychiatrist at the New York University School of Medicine and an expert on violence and its causes, told Observer during a telephone interview. “But it is almost impossible to deny that [Trump’s] behavior is one of the determinants, if not the cause.”

“It is so clear,” he added. “He has been encouraging his followers to engage in political violence against people who oppose him… I just think it would be absurd to say that his behavior didn’t contribute to or stimulate the behavior of these crazies.”

Gilligan and I talked after the Pittsburgh shooting and after the Florida man who lived in a van emblazoned with right-wing talking points sent pipe bombs to people singled out by the president.

“Without saying much, just hinting, hinting, you can achieve a lot—because those dog whistles are connected in the listener’s mind to other things he’s heard before—including calls to violence,” Cherian George, a professor of media studies at Hong Kong University and author of Hate Spin: The Manufacture of Religious Offense and Its Threat to Democracy told Observer.

George has analyzed the rhetoric of other Trump-like strongmen, including Narendra Modi, the prime minister of India. There, as here, the link is almost a straight line: Modi and his party continuously stoke violence against Muslims, who then end up dead at the hands of mobs.

Those who foment the violence always have plausible deniability—they didn’t actually say “go kill people before they get you”—but the veneer, always paper-thin, is now transparent. The proof is in the body count.

For a counterfactual, we can look at what happens when a president eschews violent rhetoric and instead calls for peace. Six days after the Sept. 11 terrorist attacks, with hateful rhetoric against Muslims and anyone who (white) people thought might be Muslim at its peak, President George W. Bush stepped into a mosque.

“These acts of violence against innocents violate the fundamental tenets of the Islamic faith, and it’s important for my fellow Americans to understand that,” said Bush, who then quoted the Quran, lamenting that the English translation is “not as eloquent as the original Arabic.”

“Islam is peace,” the president said. Almost immediately, hate crimes against Muslims dropped by two-thirds before returning nearly to pre-9/11 levels by the end of the month.

Donald Trump could do that. Laura Ingraham could do that. So could Tucker Carlson or anyone else who thus far has chosen to do the opposite. True, it might be bad for their brand, or bad for whipping up the base into a frenzy. But it might also keep people from getting killed, which is the stated goal of the rhetoric that Laura Ingraham now goes on television to tell millions of people. 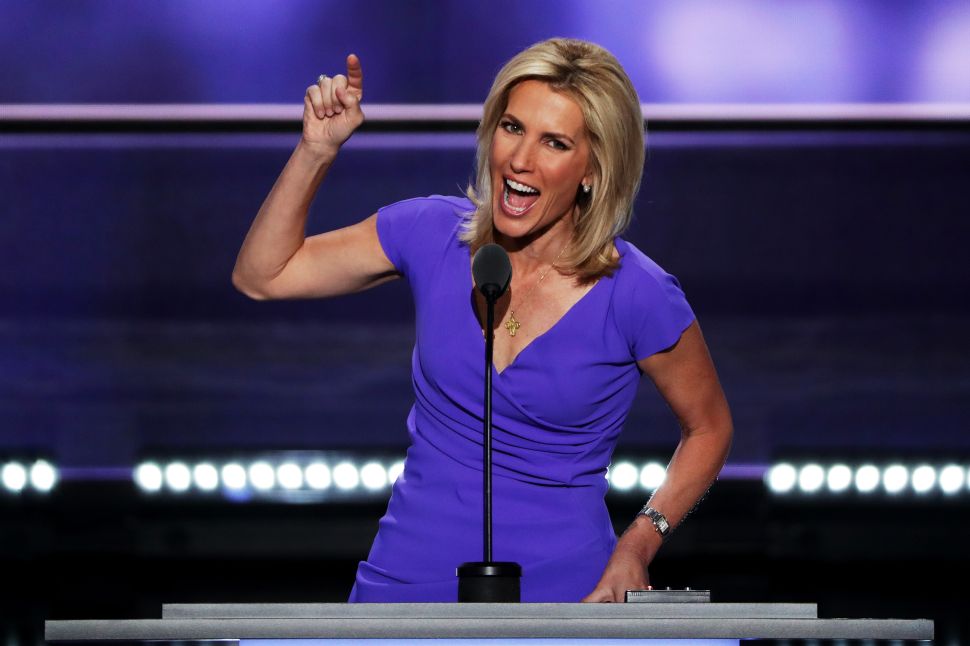