As the final episodes of Game of Thrones loom, myriad theories about how it will all end abound. I’m certainly excited to see what sort of overcooked and firework-studded final act showrunners David Benioff and D.B. Weiss have elected to slap on their magnum opus. Conversely, there’s always a chance that they’ll shoot for something understated and plotted with a fine-tooth comb—highly considered conclusions are always a treat. Regardless of your opinion of Game of Thrones, the spikiness with which the blockbuster HBO hit keeps hijacking the public consciousness and unconsciousness speaks to its undeniable influence.

The secret ingredient that makes the show so watchable? That would be the alchemy produced by two of its central stars, Maisie Williams and Sophie Turner, who play sisters Arya and Sansa, respectively.

A decade has passed since Turner and Williams first auditioned together for their parts. In the interim years, Game of Thrones has come to be defined by the radical changes undergone by the late Ned Stark’s daughters, who are thrown into immeasurably awful circumstances and forced to fight for their lives. Arya kicks off Season 1 as a scrappy amateur archer with no interest in being a royal lady, but she has since morphed into a ruthless warrior.

“Arya may have a higher body count than almost any other major character on the show, but she’s almost always been justified in the violence she’s done in one way or another,” Benioff and Weiss said in the latest issue of Rolling Stone. Arya is undoubtedly diminutive in stature, but she’s come to represent the wobbly moral pillar of Game of Thrones; she’s the unlikely agent of righteous revenge in a quasi-medieval universe rife with sexual assault, gore and the encroaching terror of seemingly invincible Arctic zombies.

Sophie Turner’s Sansa has also hardened, but not into an Arya-style lethal weapon. Rather, her instincts as a courtier have been filed to a rapier-thin point: She’s both a tactically savvy leader and a meticulous study of human character who’s just as adept at issuing orders as she is at unfurling barbed remarks. These skills have bled over into real life.

“There’s a lot of Sansa in me,” Turner told writer Brian Hiatt while making a comparison between Hollywood and Westeros, the fictional setting of Game of Thrones. “You go into something and you think it’s going to be a huge dream, and then you figure out, ‘Oh, wait. I have to be very strategic about everything. And Harvey Weinstein is Joffrey or Ramsay. Probably worse than that. A White Walker.'” She also addressed the work she did for shamed director Bryan Singer, who was in charge of X-Men: Apocalypse (and at one point Oscar winner Bohemian Rhapsody) and who’s been accused of rape and molestation of underage boys. “Our time together was… unpleasant,” she said.

Both Turner and Williams are pursuing X-Men projects after Game of Thrones draws to a close, but Williams in particular seems invested in asserting her identity outside the somber, mud-spattered Westerosi realm—she’s even founded an app called Daisie.

“I love pink so much,” she said. “It’s my favorite color in the whole wide world. I come into the office every day and I get my pink laptop out with my pink hair, and I wear a pink hoodie and I have a pink background on my screen, and a pink screen saver. For so long I pretended that my favorite color was green—I thought I wasn’t a feminist if my favorite color was pink. And then I decided that’s fucking stupid.”

Because if Game of Thrones has taught us anything, it’s that you can (usually) get away with whatever the hell you want. 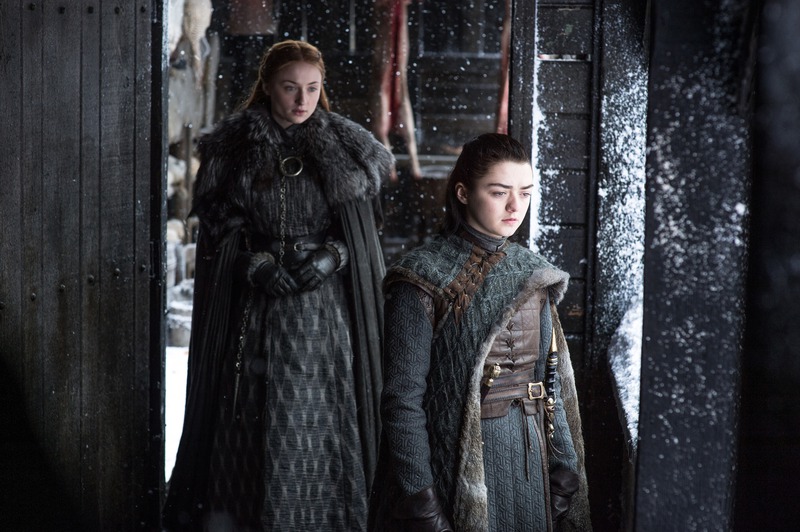