Actually, the only thing that destroys magic is Shazam!

It’s almost an impressive accomplishment to make a film about a ne’er-do-well kid who is chosen by an ancient wizard (Djimon Hounsou in Dumbledore drag) to become a godlike super being and have it come out so utterly bereft of wonder. After all, making literal the transformation fantasy we all engage in when we see superhero movies seems like a slam dunk. But for that to work the film needed to employ a genuinely childlike approach; instead, Shazam! is as blandly presentational as a market research PowerPoint.

The film employs an uneven tone, with herky-jerky shifts from generic and personality-free, family-friendly chuckles to glass-smashing action sequences that are too violent for a movie meant to skew younger than a typical action comedy.

It’s an identity crisis (now there’s a DC property I’d love to see made into a movie) that becomes blindingly apparent from the early going.

The film begins with a pair of flashbacks to traumatic moments of childhood neglect and abuse—one happening to the future hero, the other to his nemesis. It’s the kind of stuff meant to add richness and complexity to their origin stories, but Shazam! has no interest in giving its characters the kind of psychological depth that would benefit from this kind of shading. It’s barely committed to giving them personalities. As a result, these scenes feel like disjointed pieces of a film that never seems to fit itself together.

Part of the problem is the central character of Billy Batson. He is played as a child by Asher Angel and as an adult-sized superhero by a bulked up Zachary Levi, who is forced to wear an unfortunate costume that makes him look like a mascot for an off-brand hot dog company. Billy is meant to be a Mark Twain-type rascal who has a pure heart despite his penchant for escaping foster homes without warning and committing occasional misdemeanors. How do we know he’s really a good kid? Because we are told this is so repeatedly—not because it is demonstrated. The Billy on display swings from being a brat (he withholds familial affection from his foster-sister to ensure her silence about his secret identity) to a cipher.

Making Billy such a blank slate ends up hindering the story in several ways, from which the film never recovers. It makes the relationship between Billy and his foster-brother and sidekick Freddy, (Jack Dylan Grazer), lack any dynamism; rather than a sincere friendship, their pairing—with Freddy using his encyclopedic knowledge of superheroes to guide Billy through his newfound powers—seems like a marriage of convenience.

More fatally, Levi is given so little to work with when he is meant to play Billy as a grown man, Freaky Friday-style. Instead, the talented The Marvelous Mrs. Maisel co-star does generic kid responses, which more often than not come across as mugging for the camera.

There are a handful of high points; a few of the avalanche of jokes land, and some extra superheroes show up near the end to provide a few surprises. (Ignore spoilers for this film; these unexpected appearances and plot twists are truly some of the very few pleasures on offer.)

But even the potential magic of these moments is dispelled by the seriously underwritten characters and hammy acting that haunt almost every aspect of the film. By the end, Shazam! feels like a corporate product that’s so thirsty for approval from all quadrants that it never ends up figuring out what it is. 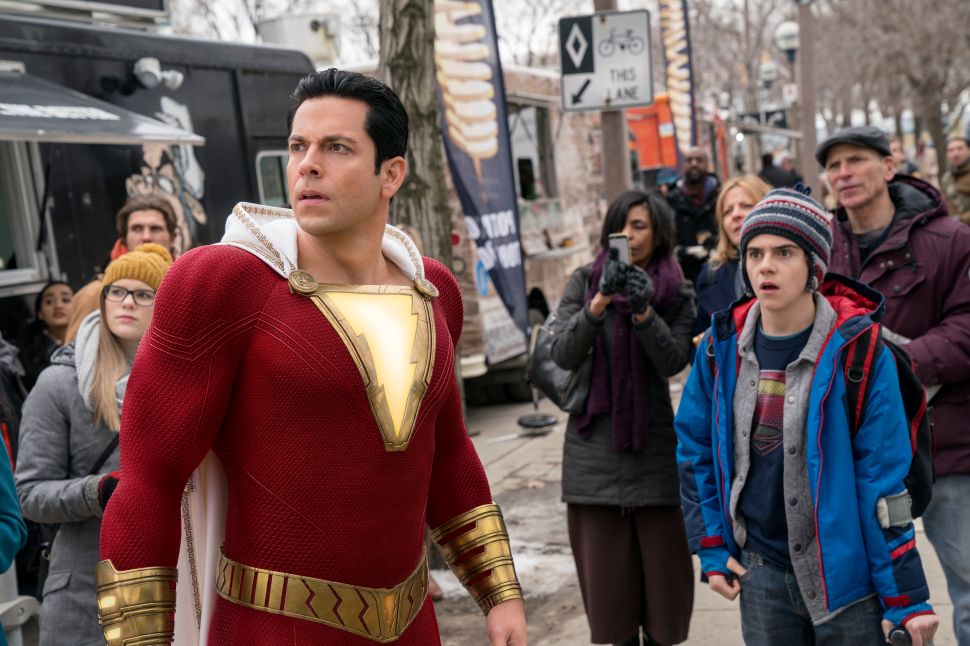