When it comes to the box office, industry observers and passionate fans are rightly drawn to the biggest, most jaw-dropping numbers. How much did this movie make in its opening weekend? Did it cross $250 million domestic? How about $1 billion worldwide? For the sake of convenience, the movie business has become a series of quantifiable benchmarks.

But one stat that often goes overlooked due to its difficulty to calculate is actual pure profit. There are a lot of costs that go into movie making that aren’t reflected in a film’s production budget (which studios often publicly downplay), including marketing and ancillary expenditures the public isn’t always privy to. If you can discover exactly how much money a studio earns from a certain project, you’re ahead of the game.

With that in mind, here are the 10 most profitable films of 2018 (profit numbers courtesy of Deadline).

The oft-remade tale of tragic Hollywood romance may have fizzled out in the Oscars Best Picture race, but it still notched eight total nominations while announcing Bradley Cooper as a directorial force and Lady Gaga as a newly minted movie star. That it made a whole bundle of money along the way is just icing on the cake.

We’ve previously explored how Universal Pictures manages to keep pace at the box office without the benefit of any superhero franchises, and Illumination Animation is a major contributing factor. The animated division continually pumps out four-quadrant, family-friendly hits on budgets far smaller than its more heralded competition at Pixar. The Benedict Cumberbatch–led Grinch proved incredibly leggy here in North America with a fantastic 4.0x multiplier (the multiple of the film’s final gross to its debut numbers).

We may not be the biggest fans of the Jurassic World series, but there’s no denying how effectively the films have weaponized nostalgia. Fallen Kingdom grossed nearly $418 million domestic, proving that our generational attraction to certain titles can serve as a marketing strategy. Jurassic World 3, slated for a 2021 release, is expected to generate similarly strong ticket sales.

The original Deadpool cost just $58 million while grossing $783 million worldwide and pulling in an overall profit of $322 million. Given the jump in budget the second time around, a reduction in profits was expected. Still, Ryan Reynolds’ foul-mouthed Wade Wilson has become so popular that he is the only X-Men character that won’t be rebooted and recast under Disney.

Venom defied all expectations and critical reactions to blow up into one of 2018’s biggest box-office success stories. It even pulled in more pure profit than Spider-Man: Homecoming (which earned $200.1 million). Most important, it finally provided Sony with a foothold into its own shared cinematic universe of Marvel characters, a continuity the studio has been trying to launch for years.

Here’s a list of a few films that the non-fantasy, non-action flick, non-superhero movie Bohemian Rhapsody has outgrossed: Spectre, Harry Potter and the Chamber of Secrets, The Lord of the Rings: The Fellowship of the Ring, Inside Out, Thor: Ragnarok, Inception, Wonder Woman and Independence Day. Make of that what you will.

Black Panther is Marvel Studios’ most sophisticated film in many ways, and, as a touchstone of blockbuster representation, it shattered all expectations at the box office. It stands as the third-highest-grossing film in North American history ($700 million) behind Star Wars: The Force Awakens and Avatar. Credit to writer-director Ryan Coogler for developing Marvel’s ace in the hole should the core Avengers cast bid adieu after Endgame.

Did you expect anything else to top this list? Infinity War was a decade in the making and the first-part conclusion of the current iteration of the Marvel Cinematic Universe. Given the astronomical expense of this month’s Avengers: Endgame, it will be fascinating to see how it compares at the box office. But one thing is for certain: Disney continues to reign supreme in Hollywood’s ongoing franchise wars. 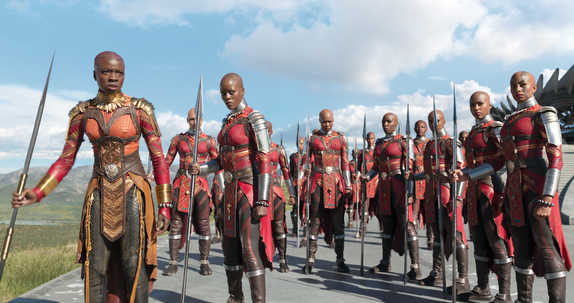