Adam Levine and Behati Prinsloo aren’t finished with their Los Angeles home transactions just yet. The couple, who have two children, just listed a massive, celeb-pedigreed Beverly Hills home that they’ve owned for just over a year. Levine and Prinsloo paid Will & Grace creator Max Mutchnick $33.9 million for the five-bedroom, 12-bathroom property in March 2018, and now they’ve decided to toss it back onto the market for a significantly increased $47.5 million.

Could he possibly upgrade from this? Adam Levine just listed his Beverly Hills home for a cool $47.5 million. 🌴 You heard me right. Levine and wife Behati Prinsloo bought the estate from "Will and Grace" creator Max Mutchnick in March 2018 for $35.5 million. Per TMZ, the couple put $7 million into a complete remodel with a world famous designer and are now listing it at the current price. The estate is on a prime BH street and has over 10,000 sq ft, including a gym, spa, guest house, resort-style pool, 2 kitchens (one just for the chef), a professional screening room, 12 bathrooms, and 5 bedrooms, inc. a 2,000 sq. ft master suite. A bonus is that Pete Sampras used to live there, so it also comes with the tennis court 🎾 he installed! Anyone want to loan me $47M? 📸: Westside Estate Agency . . #vandypop #popculture #pop #celebs #news #television #tvrecaps #movies #film #news #omg #dailydish #celebfashion #entertainmentblogger #celebrityblogger #blogger #dallasblogger #vandypoprealestate #beverlyhillsrealestate #losangelesrealestate #luxuryrealestate #beverlyhills #adamlevine #maroon5 #behatiprinsloo #celebrityrealestate #celebrityhomes #luxurypad #petesampras #tenniscourts #thevoice

This is just the latest real estate move for the Maroon 5 singer and Victoria’s Secret model. They purchased a Holmby Hills home for $18 million in late 2017, only to sell it for precisely the same amount six months later in February 2018—they had already stripped the place down to the studs, so they likely lost a bit of money on that one. Shortly thereafter, Levine finally sold his Benedict Canyon bachelor pad to none other than John Mayer.

But back to their newly listed, gated Beverly Hills residence. It was recently entirely remodeled, as Levine and Prinsloo reportedly spent $7 million on a super-fast renovation.

Westside Estate Agency Kurt Rappaport, who has the listing, said the couple is selling the home so they can “live closer to their children’s school,” per Mansion Global.

A two-story entry leads into the 10,376-square-foot house. There’s a formal dining room with its own bar, a black wood-paneled office and a 50-foot living room with a fireplace. The kitchen is equipped with stainless steel appliances and sleek silver countertops as well as a big island; it’s open to a family and media room.

It does look like Levine and Prinsloo lived here for at least a short time, as the palatial closet in the master suite is filled to the brim with clothing and more sneakers than anyone could ever need.

There’s also a marble bathroom with a standing tub in a separate room, plus a double marble vanity, as well as a screening room furnished with plush couches. Also on tap: a gym and a guest house. Outside, an oval-shaped pool is surrounded by stone, lounging areas, a fireplace and an outdoor kitchen complete with a pizza oven.

Elsewhere, there’s a putting green and a tennis court—it’s a fitting addition, considering the house once belonged to Pete Sampras.

As for Levine and Prinsloo’s next move? Well, they paid $35.5 million in late 2018 for Ben Affleck and Jennifer Garner’s Pacific Palisades mansion, so that may be why they decided to sell this Beverly Hills pad. Perhaps they’ve finally found a home they want to keep—at least for a while. 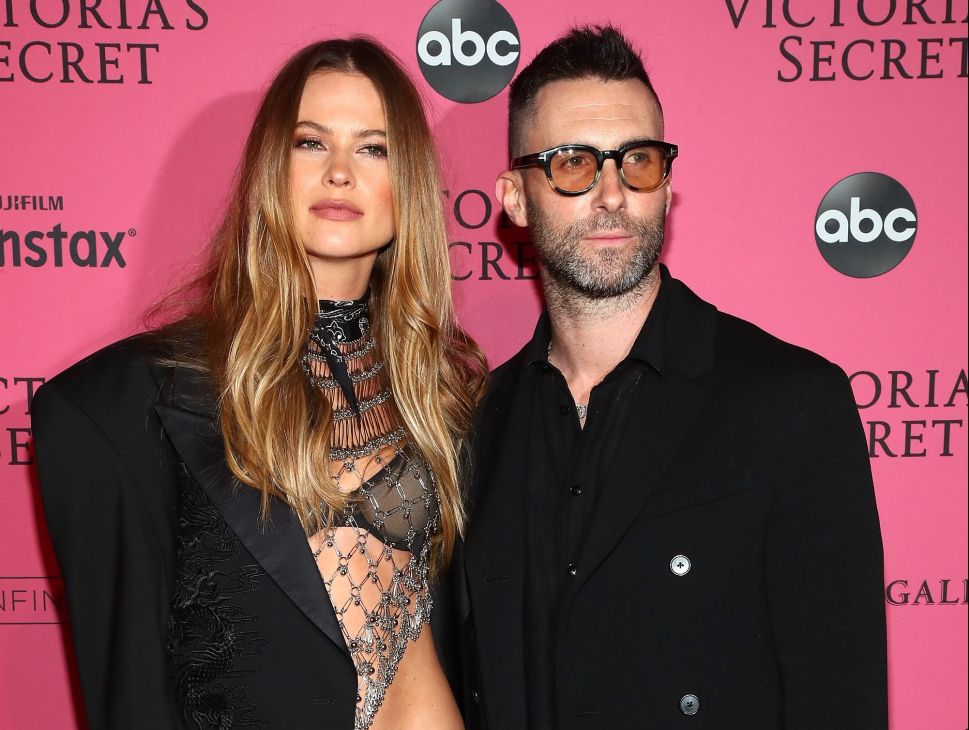