Let the applause begin. As one of the sorriest seasons in New York theater history is limping to a close, Broadway at last has something wonderful to write home about. The Roundabout Theatre Company, at the American Airlines Theatre, has just opened a polished, moving and beautifully mounted revival of Arthur Miller’s postwar drama All My Sons, meticulously directed by Jack O’Brien with an extraordinary cast headed by Annette Bening, Tracy Letts and Benjamin Walker that only a fool would ignore, dismiss, or dare to overlook. This is as good as it gets.

Set in 1947, the year the original production directed by Elia Kazan opened with a cast that included Ed Begley, Karl Malden and Arthur Kennedy, All My Sons is a sobering examination of war profiteering among so-called respectable people and the effect that one example of capitalist greed had on two neighboring families in Ohio. The subject truly never loses relevance. With all of the criticism aimed at Boeing these days for the alleged faulty manufacturing of their 737 and 787 jets that have given a black eye to the safety of air travel, it seems more pertinent than ever.

Told in restrained but intensely emotional terms by Arthur Miller, the play still delivers a gut punch with the story of a successful industrialist named Joe Keller (Tony-winning actor and Pulitzer Prize–winning playwright Tracy Letts) who is discovered by his own son to have knowingly provided 121 damaged cylinder heads for an assemblage of government war planes that killed 21 American pilots. Joe served a brief sentence in prison for the crime but was released and exonerated on appeal after shifting the blame on his friend, business partner and next-door neighbor, Herb Deever, who is still behind bars.

Joe’s son Larry is still missing in action, but Kate Keller, the family matriarch (a superlative Annette Bening), lives with the conviction that Larry is still alive and coming home to his family and his fiancée Ann Deever, the daughter of the business partner who is still serving time for a crime he did not commit. Now the Kellers’ youngest son, Chris (Benjamin Walker, who dazzled Broadway as the sexy serial killer in the musical American Psycho) hopes to take his brother’s place in both his father’s factory and in the heart of his brother’s girl, and invites Ann home from New York, where she now lives, for the first time in five years so he can propose.

But everything collapses when Ann’s brother George, who has just visited his father in jail, also arrives to inform them all that Joe has been lying for years. Guilt, redemption and the moral decay of capitalism are debated, and now that the old case against Joe is about to reopen, the family is torn apart by remorse. When Chris attacks his father, asking if he realizes that because of his irresponsibility one of the pilots killed could have been his own son, Joe has a moment of staggering reality, confessing, “They were all my sons!” What happens next is shattering.

There are so many things to applaud in the heart-stopping dramatic impact of this exemplary production that I hardly know where to begin. You can start with the most fabulous, three-dimensional set I have seen in years—Douglas W. Schmidt’s architectural marvel of a pristine Midwestern backyard replete with two neighboring white clapboard houses, flower gardens and green grass, a screen door with springs that squeak when it opens and closes, antique wicker lawn furniture and a wisteria arbor covered with clusters of purple flowers hanging like grapes.

Next, you can applaud O’Brien’s fluid direction, which clearly defines the differences between the characters’ goals. And finally, there’s the cast. Without exception, the actors are splendid, but especially Letts, who invests the role of Joe with a soft and tender concern for the people he loves that contrasts with the rugged individuality of his ruthlessness in business, and Bening—distinguished, agonized and totally hypnotic as a woman trying to cope with the loss of everything she believes in.

Best of all, I applaud the refusal of Miller’s daughter Rebecca to allow anyone to wreck the purity of her father’s writing with gimmicks and preposterous changes. So All My Sons soars again, with its original values intact, stronger and tougher than ever. To everyone involved, a full round of cheers for a rare chance to experience an evening of nuanced power, urgency and art. 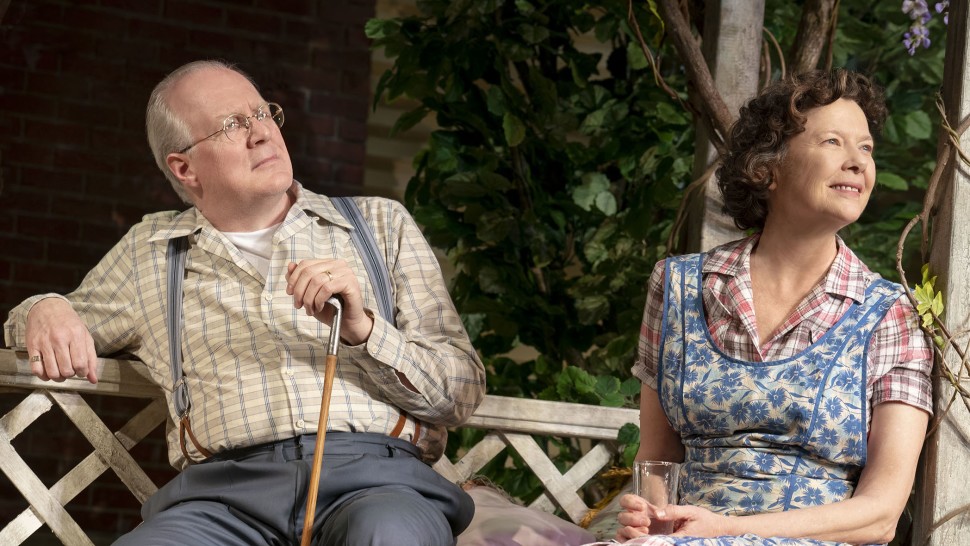