In January 2017, as Donald Trump was preparing to take office as president, photographer Elliot Ross and writer Genevieve Allison decided to embark on a road trip. Over a span of five months the couple traveled the 2,000 linear miles of the United States-Mexico border in its entirety. How better to understand the heart of the issue that was vexing the country than by traversing every inch of it, talking to the people who live with it not in the abstract, but physically, every day?

Two years later, as issues of xenophobia and racism continue to divide the country and the United States’ relationship with its Southern neighbor becomes more contingent every day, the duo have decided to present their documentation from that trip in the form of a book. What appears is an amalgam of fragmented stories that have less to do with talk of the “Wall” and more to do with the amplification of issues like discrimination, acculturation and surveillance as a result of increasing governmental presence in people’s lives along the border.

Through a collection of portraiture, topographical photographs, maps and beautifully written essays, American Backyard presents a picture of the border beyond the narrative we are spoon-fed, of dispossessed migrants and angry Americans. At one point Allison likens the wall to a Richard Serra sculpture, “how it cuts through the landscape, passive and un-emphasized, structuring the environment and creating spheres of social, political and cultural relativity.”

In advance of the book’s release in May by Gnomic Books, we spoke to the authors about the misrepresentation of border towns, navigating the increased presence of U.S. border enforcement, and assimilating the endless visions of America they encountered along the way.

Observer: Elliot, a lot of your practice revolves around the social repercussions of geopolitical borders and isolation. How did the idea to explore the U.S.-Mexico border come about?
Elliot Ross: This project came about in the wake of Trump being elected and beginning to see all the fractures that precipitated the 2016 election. I saw our country, especially when I was traveling abroad, being presented in a way that I believed wasn’t accurate. The United States took on this persona that I felt like was very un-American. The curiosity, for me, was how much truth lay in the narrative Trump was crafting about the border and how much of it was fabricated to achieve his agenda.

Why did you title this series “American Backyard?”
Genevieve Allison: We were thinking on two different levels. Firstly, how there’s this very sort of strong message in the United States, where it’s almost like a right for people to have a home and a backyard—this image of belonging within the personal domain. Secondly, how this idea translates to our international boundaries and frontiers, the ownership of state in the way that we demarcate it. We were looking at the whole idea of the southern border at the point where abstract meets reality, because borders are often talked about very metaphorically, but also looking at the physical implications of the border.

How did you navigate matters of access and permission?
ER: That was a lot of work before we left. It was a lot of cold emails to the Department of Homeland Security and a lot of following-up and phone calls. Finally, we found the right person within the agency who kind of championed the idea we were pushing and gave us kind of a hallway pass throughout the trip. With each sector, he put us in touch with the PR Chief and then that person, in theory, would tell the different section chiefs that we were coming and supposedly permissions would sort of trickle down the line. The reality of that was much spottier. We’d go from section to section and nobody would have any idea who we were or why we were there and we’d have to explain our case all over again—sometimes a dozen times a day. But as we kept going, especially once we left Texas, I think we gained momentum and learned how to navigate what were sometimes very heated situations with the border patrol.

Was it a struggle to convey the many juxtaposing visions of America you encountered along the way?
GA: It was an interesting process for us because we went into the project looking to recruit a spectrum of positions, from people who harbored anti-immigrant sentiments and were for the border wall to those who were adamantly against it. In the end, we decided that diagnosing pro or anti-wall sentiments was futile because, no matter if they were Trump supporters or anti-NAFTA, we couldn’t find any voices who were solemnly pro-wall.

Right. Because if you’re living the realities of these policies that seem so abstract to us, you’re not concerned with pro or anti-wall discourse.
GA: Exactly. I mean this was two years ago and people living near the border were so fatigued and disinterested with the actual wall and so much more engaged with other issues that affect them, for example the environment, the social implications of having the increased presence of border security and surveillance, access to quality education and healthcare, and also just larger narratives of stereotyping and racism with a lot of these communities being 90 or 95 percent Latino or Hispanic.

Touching on the theme of surveillance and the increased presence of border patrol agents, were there any obstacles you encountered that hindered you from photographing a certain thing or interviewing a group of people?
ER: In the end it was surprising how much access we did have. The only real impediment that we encountered was traveling in the Tohono Oʼodham reservation, from which we were removed on our second day. There is a media ban within the reservation and you have to have express permission as an outsider to be on the reservation. We tried to go through the proper channels, but in order to get express permission you have to have the unilateral agreement of all the chiefs within the reservation. The only way to achieve that is to go to one of the twice-yearly gatherings of the chiefs and when that date was no one knew. So we had to resort to sneaking back in. That was definitely one of the moments of the trip where we felt unsafe and odd, in not having the support of some of the people who had been helping us along the way.

A thing that came up repeatedly for me as I read the book was the misrepresentation of border residents.
GA: And people are really irritated by the narratives of violence because for the most part these are very peaceful, safe communities. There’s always the story of that one time ten years ago when something happened, a confrontation with a border-crosser or with a border patrol agent—

ER:—but when reporters come through and ask for these anecdotal stories of border incidents that may have happened in the distant past even, those stories will get cherry-picked from the interview to represent that person’s experience living on the border, whereas maybe it was just one incidental thing that happened a while ago that had no significance to their lives. I find that the weight that is put on those anecdotes is way over-proportional to the issues that actually affect these communities, which are the familiar sweep of woes that marginalized communities face when it comes to healthcare and education primarily.

Elliot, the topographical images of the border wall are striking and really give a sense of its monumental scale. Did you find it to have a phenomenological presence?
ER: It does have a phenomenological presence and what I find most interesting about it is how it interacts with the landscape, how it travels through it, and how it interacts with the different topographies. The feeling that you have along it is one, I think, of being awe-struck by just its sheer scale and size. It’s a very impressive physical thing that man has built. And counterbalancing that is just a feeling of sadness in terms of why it exists in the first place, especially thinking of the resources that were required to build such a large thing through communities that could really use the money in much more neutral ways.

Gnomic Book is currently running a Kickstarter campaign to support the limited edition run of 750 copies of American Backyard. 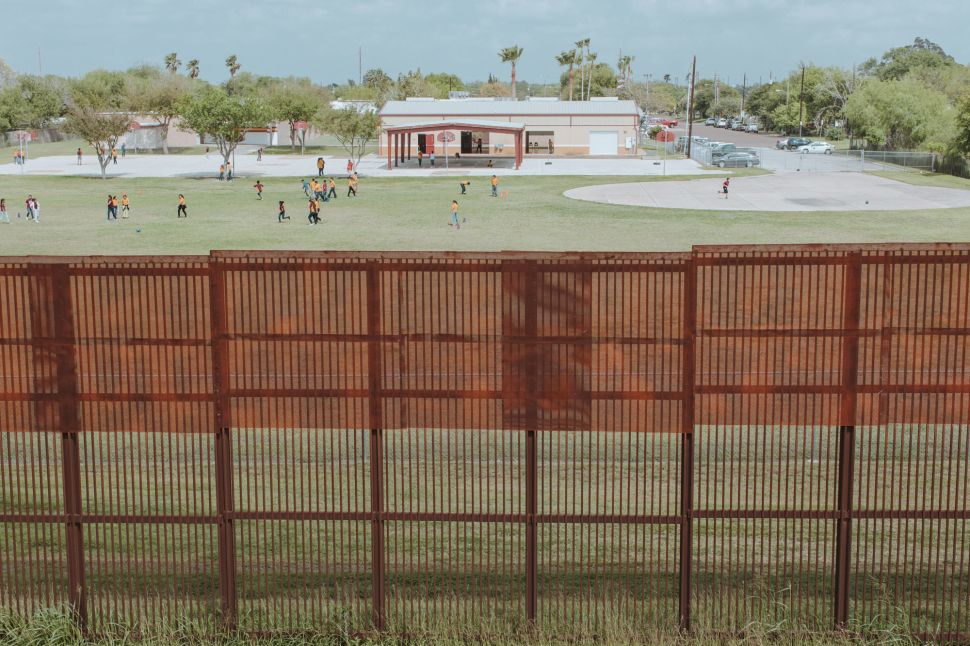