“Confusion is good,” Andres Serrano tells me. “It’s good to mess with people’s heads.” We’re standing inside the two-floor exhibition space housing “The Game: All Things Trump,” the photographer’s multimedia ode to our tacky, promiscuously self-promoting commander-in-chief. Serrano—who is indelibly etched on the public imagination thanks to his 1987 image of a crucifix submerged in urine—has spent the past year trawling eBay for this glut of ephemera, from frisbees and coffee pods to casino security-guard uniforms and kazoos. The end result is something that Serrano conceives of as a singular portrait of the president, though an unenlightened bystander might mistake it for a fanboy shrine (albeit one shot through with plenty of Atlantic City kitsch).

It’s a confusing experience, indeed: Spend an hour mulling over these birthday invites, hagiographic magazine covers, and terrible ties, and wait for the unbearable banality of evil to start pressing down on your chest like a case of Trump Vodka. The show, which will remain up at 409 West 14th Street in the Meatpacking District through June, is a testament to a man who Serrano views as a “marketing genius.” While Trump’s business acumen is largely derided, it’s hard to argue with the man’s willingness to prostitute his own name and image. Here he is, mugging for his “Signature Serta Mattress Collection”; there he goes, chugging a bottle of Trump-branded Diet Snapple.

Touring “The Game” is not a relaxing experience. There’s that face, for one thing, everywhere—at different ages and stages of hair decomposition. One black-and-white portrait of a youngish Trump finds him somewhere between baby fat and droopy jowls, a player who, by dint of whiteness and wealth, thinks he can seduce the world. An illustration for a 1995 birthday party airbrushes this never-handsome man into a close cousin of Richard Gere. Framed and signed memorabilia makes up a good portion of the installation. That includes an autographed image of Trump standing atop a tank while a red-eyed American eagle swoops past, machine gun blazing. Elsewhere, the cavalcade of crap becomes simply oppressive: campaign buttons and Taj Mahal sugar packets and 12-inch talking dolls and “The Trump Guide to Distressed Properties” and copies of Affluent Golfer magazine.

Things not on view in “The Game” include a shady $60,000 regal portrait of Trump that was the subject of testimony by the president’s longtime lawyer, Michael Cohen. Also missing: transcription notes that Trump pocketed following closed-door meetings with Vladimir Putin; signed pictures of Don Jr. and Eric smiling over the corpses of large, dead animals; an unredacted copy of the Mueller report.

“It’s a good mix,” Serrano said, of the foot traffic he expects that the show will get in this notoriously tourist-heavy corner of the city. “I find that in the art world it’s clear how people feel about Donald Trump. But to me, it’s boring to do something anti-Trump. It can be easily dismissed, there’s no real depth to it, it’s one-sided. Here, with this portrait of Donald Trump that I’ve created, I’m allowing Trump to be himself—I’m letting him speak with his own words.”

That’s one way of putting it. But “The Game” also makes it clear that for Trump, the very concept of “self” is a slippery one. There’s a reason why the President is occasionally compared to Patrick Bateman, and why the murderous protagonist of American Psycho worshipped Trump: strip away the facade of branding and consumerism and see if there’s actually anything left underneath.

I wondered: Could Serrano be someone who dislikes or even hates the president, yet still is capable of putting together an exhibition that is balanced, if not almost reverent? “I know how to be professional and do my job, regardless of who or what I’m photographing,” he says. Fittingly, given the subject at hand, he brings up two previous bodies of work: one for which he took pictures of KKK members, and another which involved detailed, up-close images of excrement. In those cases, Serrano explains, he was able to ignore the obvious, whether that meant racist hysteria or the overpowering smell of shit. “In this case I didn’t let Donald Trump interfere with my ability to do a portrait of him,” he says.

Serrano tells me he’s an artist who “[doesn’t] like to take positions,” which seems odd. And while I agree with him that a museum full of anti-Trump agitprop would be boring, if not downright horrifying, it’s hard to know how to feel about “The Game.” We’re already living in this particular hell—and it’s one with real-world consequences. Serrano says that, immersed in his process of accumulation, he often got sidetracked by the news. “The president gets on TV and he’s talking about things that are distracting to me,” he explains. “I would have to say, to the TV: ‘Mr. President, I’m trying to do my work here. Please let me concentrate. I’m doing this portrait of you, don’t distract me.’”

Those distractions—family separations at the southern border; buffoonish blustering that could lead to nuclear war with North Korea, or in the Middle East, or everywhere; judges that are drooling over the opportunity to repeal Roe v. Wade—seem slightly more pressing than a headshot signed by Kellyanne Conway or a VHS copy of Roseanne: Live from Trump Castle. “Can we applaud the president and stick it to him at the same time?” Serrano wondered, answering in the affirmative. His dream is that visitors who despise Trump will somehow be able to love the exhibition. And yet attempting to enjoy “The Game” feels a bit like complicity, now that the #Resistance is falling out of favor.

Serrano might be eager to float gently above this installation—non-judgmental and somehow removed, simply a curator of “all things Trump.” But in April of 2019, the stakes seem higher than…steaks. “If there’s a copy of Mein Kampf out there that Donald Trump has signed, I’ll take that too,” the artist says, when I ask him if the collection of “The Game” might expand in the future. It’s a joke, but one that has more truth to it than an entire vitrine full of vintage “Success By Trump” deodorant. 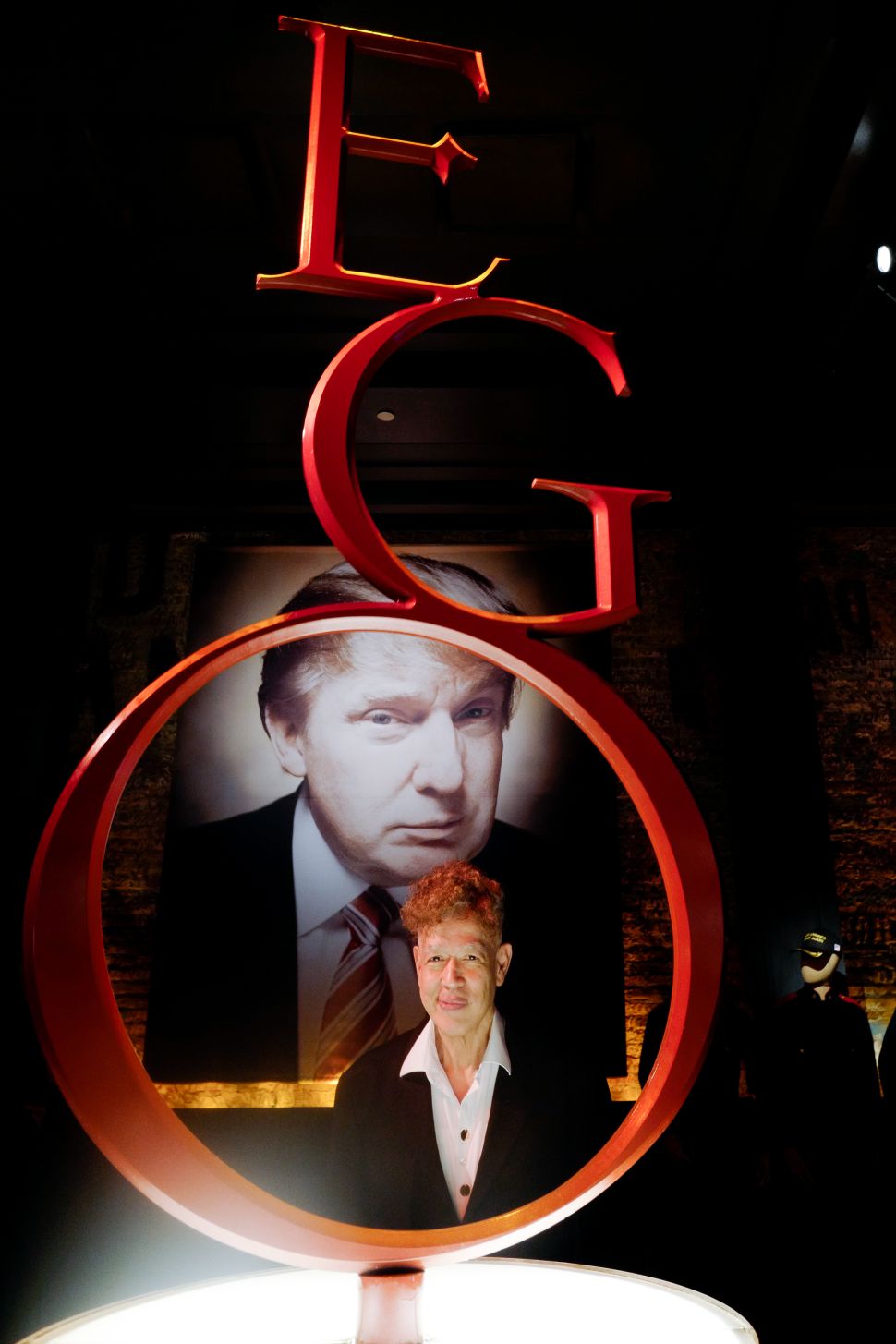