Some Democrats think that every problem has a legislative solution. Some might say that thought is naïve, foolish and invasive against personal liberty, while others might call it idealistic, hopeful and exactly what responsible government is supposed to do.

Whatever it is, the House of Representatives has a bill that tackles some of the most significant issues impacting the country’s electoral system. It addresses issues ranging from redistricting to election security to campaign finance. While it is unlikely that the “kitchen sink” method will ever result in binding law, many of the proposals do warrant careful consideration.

On March 8, the House passed the “For the People Act of 2019” (H.R.1) by a vote of 234-193, strictly along party lines. Senate Majority Leader Mitch McConnell (R-Ky.) has already stated that the bill has no chance in the Senate. While a massive 700-page bill may be dead on arrival, lawmakers should continue to debate its provisions, many of which attempt to fix what most would agree are serious problems plaguing our election process.

In an effort to end partisan gerrymandering, states would be required to establish independent redistricting commissions to draw congressional maps. Commissions would include equal numbers of Republican, Democratic and unaffiliated commissioners. The work of the commission would be conducted in open public meetings and subject to oversight and community feedback.

H.R.1 would also enact a uniform set of rules that must be followed when drawing district lines. The rules give greater weight to certain criteria, such as keeping communities together and explicitly prohibiting partisan gerrymandering.

Among the more controversial provisions, H.R.1 would restore voting rights to people who have served felony sentences. To bolster the Voting Rights Act, the legislation also includes a congressional finding that racial discrimination in voting remains a significant concern and seeks to restore “protections for voters against practices in States and localities plagued by the persistence of voter disenfranchisement.”

H.R.1 also seeks to overhaul federal campaign finance law and counteract the flood of dark money into U.S. elections since the Supreme Court’s Citizen’s United decision. The bill would establish a six-to-one matching system for donations of up to $200 to congressional and presidential candidates who turn down big money contributions. The small donor matching system would be funded by financial penalties imposed on corporations that have violated campaign finance laws.

H.R.1 also amends federal campaign disclosure rules. The bill closes legal loopholes that have allowed dark money groups to keep their donors anonymous. One provision would require super-PACs and similar organizations to disclose donors who contribute more than $10,000. Another provision would enhance the disclosure and disclaimer requirements for “electioneering communications”—campaign ads that refer to clearly identified candidates within 30 days of a primary or 60 days of a general election—to include paid internet or digital communications. Online platforms with over 50 million unique visitors per month would also be required to establish a public file of requests to purchase political ads, which is the record keeping requirement that currently applies to broadcasters.

H.R.1 would require states to eliminate paperless electronic voting machines and replace them with systems that create a paper record that can be audited. It would also establish grants to aid states in beefing up their election security. The legislation would require election system vendors to satisfy certain security requirements, including mandatory reporting of all cybersecurity breaches to the federal government.

Is H.R.1 the solution to everything that’s wrong with politics? Probably not. But the fact that Democrats and Republican don’t yet agree on a solution is never an excuse to stop the conversation. American citizens also favor reform. In a Wall Street Journal/NBC News poll conducted last fall, 77 percent of respondents said reducing corruption and the influence of special interests was either the most important or a very important issue facing the country. 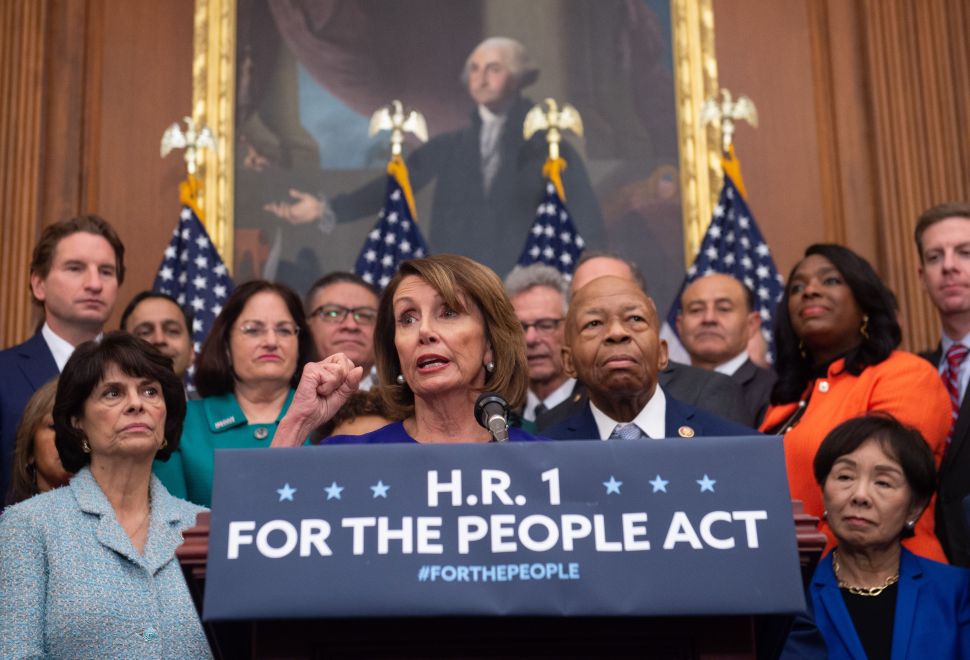