A steady stream of furniture is bought and sold among greater New York City residents, as couples marry or split up, as kids are born or leave for college, as graduate school starts and finishes and, of course, as certain pieces simply no longer “spark joy.”

Five years ago Reham Fagiri and Kalam Dennis co-founded AptDeco, a startup that streamlines buying and selling moderate to high-end used furniture in greater New York City. Each co-founder had experienced unpleasant interactions selling furniture—Fagiri felt her safety was threatened, Dennis was frustrated by buyers’ flakiness—which was the motivation behind launching AptDeco.

AptDeco’s website features clean, crisp photos of West Elm beds, Design Within Reach sofas, Alvar Aalto tables and Knoll chairs, among other quality furniture brands. AptDeco’s approximate 50 employees do all the work of the typical buyer or seller who use Craig’s List or eBay. They inspect the furniture onsite, disassemble and assemble, pick up and deliver. In exchange, AptDeco earns between 19 and 29 percent of a purchase.

High above Manhattan in the Hearst Tower, CEO Fagiri, originally from Sudan, explained how AptDeco was launched, why attending Y Combinator was essential despite her degree from Wharton, how being an immigrant from Sudan impacts her business decisions and the country’s recent political upheaval.

You transitioned from engineer to startup co-founder?
Yes, after graduating from the University of Maryland, I moved to New York and started at Goldman Sachs. I was part of the teams that built their software for the investment bankers and traders.

After almost six years at Goldman, I went to Wharton [School of the University of Pennsylvania]. I thought I wanted to leave tech completely, but I wasn’t sure what I wanted to do; business school seemed like a good place to explore. And I ended up starting a company! [laughs]

How did the concept of AptDeco come about?
I was moving back to New York City from Wharton, I had a job waiting for me. I was trying to sell my furniture on Craig’s List; I had nice West Elm, Crate & Barrel furniture. It was cumbersome to disassemble pieces of furniture for buyers, carry it to their trucks and awkward negotiating a price, getting paid in cash.

I also had a creepy experience. A guy came to buy a TV and I listed the wrong model number by accident. He got really upset and said, “I’m taking this TV and I’m not paying you for it.” I was by myself in my apartment, and at that point anything could have happened. I felt unsafe and told him to just take it; $100 is not worth risking my safety.

That’s awful, how scary.
Yes. I thought, why is Craig’s List still a thing?

How did AptDeco, evolve from concept to actual company?
It happened very organically. When I moved back to New York, I brought a few pieces of furniture with me in a U-Haul truck. My co-founder [Kalam Dennis], we were friends, had been trying to sell his sofa on Craig’s List. He was really frustrated because people were low-balling him and not showing up when they said they would.

He asked if he could borrow my U-Haul truck, I still had a few hours before I had to return it. He posted, “One day only, free delivery in New York City” on Craig’s List. Someone contacted him immediately, came over, paid in full in cash, and he delivered it.

That was the “aha” moment. I had been thinking about the safety aspect of buying and selling furniture. For him, it was the frustration. So creating a safe place where buyers and sellers can communicate and transact—not in cash, with furniture pick up and delivery—became the premise for AptDeco. It hasn’t changed since.

At what point did you attend the accelerator Y Combinator in Silicon Valley? Did you learn anything new? I mean, you went Wharton.
Yes, it was the best decision. At the time, we had a product, probably less than 100 customers and some sales. What we didn’t know—didn’t even know we needed to learn—was getting our first 100, 200, 500 customers. We both had corporate backgrounds. They advised us to meet our customers.

Did you? How?
Yes, we started by delivering the furniture ourselves. When we walked into their homes, we saw how they lived and why they were buying or selling. Most were going through a life event, having a baby, getting married. It was really fascinating, and it helped us from a marketing perspective.

I also passed out flyers on the street. It was fun, but also very humbling. It’s like, I went to Wharton! I worked at Goldman Sachs! And now it’s February, it’s cold and I’m passing out flyers. [laughs]

Business school doesn’t teach you to really get your hands dirty, roll up your sleeves, pass out flyers—the practical nature of owning a business.

Did you seek venture capital funding?
Yes, we’re series A, but we don’t really talk about how much we’ve raised.

Today, a startup’s success is sized by how much capital they’ve raised versus how happy their customers are, how profitable, or not, they are, these are the real metrics for a business. Venture capital is a means to an end.

I had raised money for non-profits, been to Wharton, through Y Combinator, we have a good network, but raising money has not been an easy journey. When you look at the data, funding for women is pretty nominal and funding for people of color is even worse.

Your co-founder is American-born, you’re from Sudan, do you think that helps AptDeco?
I think it does. I had not recognized the opportunity patterns in the U.S. that are based on race, gender, etc. I grew up in Sudan, in an environment where I am the [racial] majority. He’s African-American, he had to break down that piece of American culture. I thought, “Well, it’s not going to stop me doing what I’m doing.” I think I helped push some of those boundaries for him.

Has being an immigrant from Sudan helped you as an entrepreneur?
The entire economy in Sudan is built on small businesses, there are no big corporations. So if you have to make ends meet, you essentially have to build your own small business. My father has his own firm, most of my aunts—it’s very woman-friendly in terms of business—have their own architecture or engineering firms. That’s how I grew up, and I think it’s influenced me more than I thought.

What do you think about the current situation there?
I’m excited. After 30 years of brutal dictatorship, the people of Sudan are optimistic about the future. Peaceful demonstrations have been taking place since December. I grew up hearing stories from my father about the role of university students leading demonstrations in the ’50s and ’60s; it’s great to see the youth leading this time around too. I wish I could be there!

Some entrepreneurs I interview are very proud of being female, or a person of color, or an immigrant, but others don’t want to be labeled by race, gender or being foreign. What are your thoughts?
I’m proud of all three, but I don’t think about it so much because I can’t control how someone who is sitting across the table from me sees my color or gender, “Oh, well, she’s a woman and black.” [dismissively] Well, that’s your stereotype and bias, and I can’t do anything about that. But I can focus on building my business, having great metrics, making sure all the customers are happy. Those are the things I can control, and then we’ll see what comes out of that.

Does representation of race, gender, being foreign-born, matter?
Absolutely! I happen to grow up in family of engineers, so I became one, it’s what I saw. But for someone who doesn’t have that, being able to see people on TV or out in the world like them, is very important. “Oh, there’s a woman from Sudan who started a company in America. Wow, that’s cool, I guess I could do that too.” 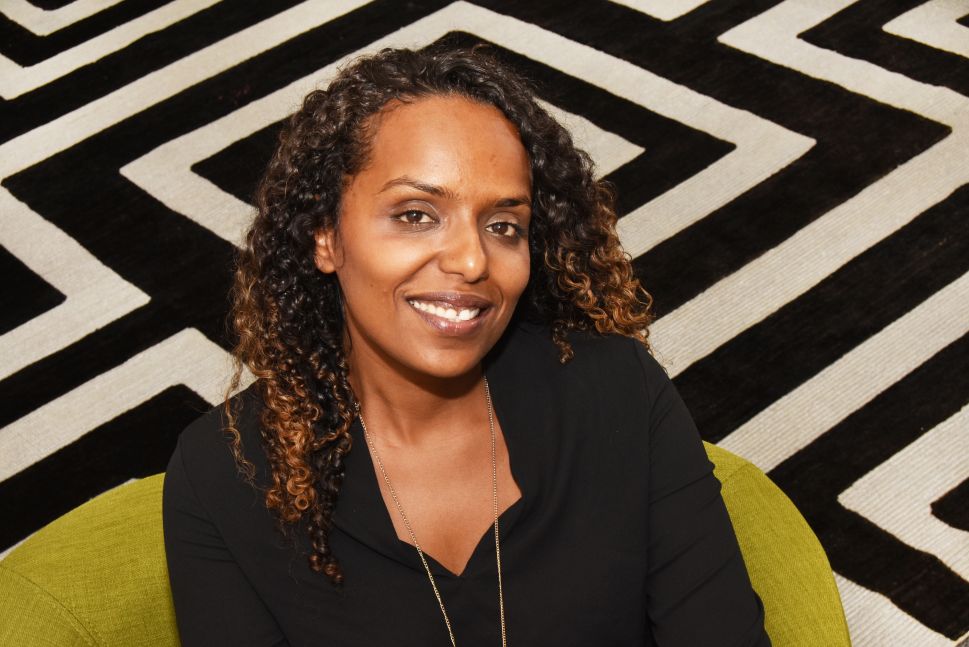