Now in its 37th edition, the Belgian capital’s annual Art Brussels has firmly established itself as the discovery fair of the contemporary art scene. The fair’s mission of encouraging experimentation and highlighting emerging artists never fails to spotlight unconventional artistic processes and materials. This year, the prevailing trend laid in the resurgent popularity of the textile, leaving evidence of a renewed contemporary interest in tactility and labor.

In Knokke-based gallery Patrick De Brock’s booth, a solo show of Ethan Cook’s works speaks to the labor behind a blank canvas. Using stock colors of pre-dyed cotton and a four-harness loom, Cook weaves the cotton into the canvas and then sews it together using rule-based systems of abstraction. Various aspects of the process (weaving, sewing, stretching) can be seen in the finished work, leaving the presence of the artist’s hand in an otherwise standardized industrial process.

When I ask Cook if that’s the point of making these textiles, he tells me it’s just a byproduct of the process. “I’m not necessarily interested in woven structures so much as making a canvas,” he says. “I wanted to take the barrier of paint away from painting.”

Still, Cook’s work is evidence of a growing contemporary movement towards DIY—and one clearly being met with enthusiasm: on the first day of the fair, the booth had completely sold out. “The public is clearly paying attention because there are numerous galleries who propose textile arts,” says fair director Anne Vierstraete, telling me she spotted something like 48 tapestries at this year’s fair.

Cook cites systems-based artists like Martin Barré and Bernard Frize as reference, evident in the way his elegant pieces prevent the eye from diving beyond the flat surface of the pictorial space. “It’s more about flatness than, say, found textiles.”

The opposite can be said of Beirut-based artist Etel Adnan’s work. In a beautiful little room within Galerie Lelong & Co.’s booth near the entrance of the fair, a vertically striped tapestry topped with black outlines of flowers adds new dimensions to the watercolor flowers and yellow landscape paintings, also by the artist, that hang beside it. The tapestry here becomes an homage of sorts to Adnan’s Lebanese heritage, her meticulously chosen color scheme made all the more vibrant by the thick texture of the wool.

Adnan, who has been weaving tapestries since the 1960s, made this particular one in collaboration with the French Atelier Pinton in 2017. Nathalie Berghege-Compoint, the gallery’s communications director, points out France’s long history with textiles dating back to the Middle Ages. “It’s great that this very traditional medium is not falling apart and that contemporary artists are finding ways to work with textile factories and give life to old traditions,” she says.

Further down, Nathalie Obadia’s booth features another nod to the medieval textile industry with Josep Grau-Garriga’s chromatic fiber work. The heavily textured mass of wool, cotton, and raffia is a testament to the beginnings of the textile as contemporary art and the pioneering artist’s ambitions to incorporate relief and texture in the traditionally static medium.

The star of the booth, though (maybe of the entire fair), is the enormous Laure Prouvost tapestry spanning the entire back wall of Nathalie Obadia, This Means Tableau, 2018. The meta-colonial work speaks to the artist’s fascination with dream-like settings and the limitations of language, proposing an ambiguous space not confined by boundaries or linguistic subjectivities— one where, perhaps, goats are worshipped as deities.

Also on view at the booth is one of the 100 limited-edition tapestries Prouvost created to finance her work for the French Pavillion at this year’s Venice Biennale, each priced at €4,000. The smaller woven silk pieces feature a play on the popular French expression, “On va vous raconteur des salades” (we will tell you lies). Prouvost instead mistranslated the phrase to “We will tell you loads of salades on our way to Venice,” an indication, if anything, of more linguistic slippages and duplicity awaiting at Venice. 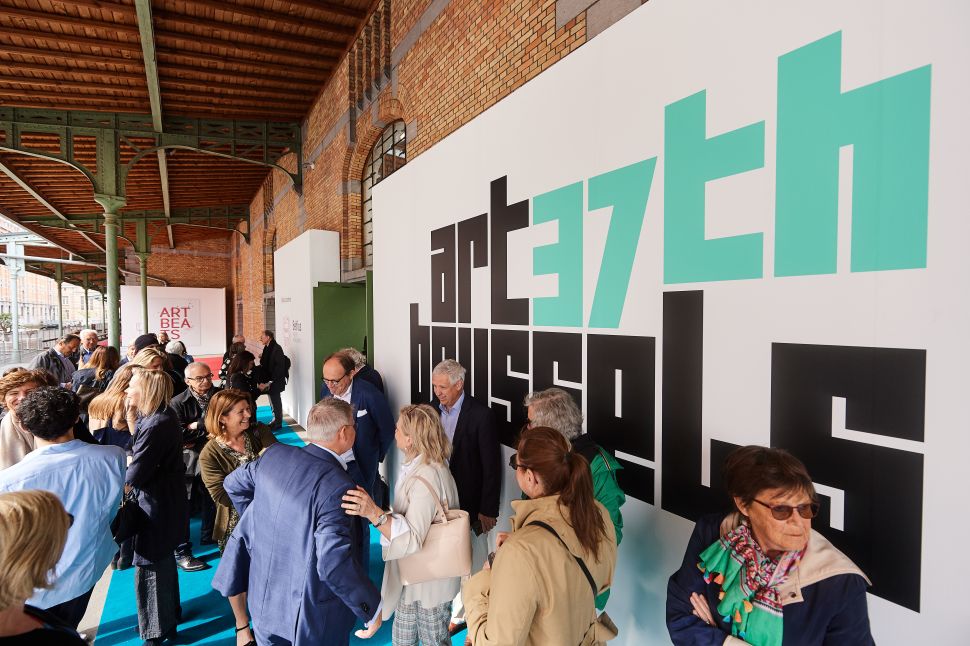