Back in 2017, I was invited to be part of a panel discussion on artificial intelligence (A.I.) and art. Organized by Nanotronics, a company headquartered at New Lab in Brooklyn’s Navy Yard that builds AI-powered microscopes, it was moderated by their chief revenue officer, Justin Stanwix. Stanwix began by requesting proposals for a working definition of the term A.I. As something of a non-expert in the field, I offered the example of Skynet, the fictional artificial intelligence system that features centrally in The Terminator. Basically, a self-aware system that learns and adapts.

I bring this up for a couple of reasons, the most obvious of which being that like most people, I have no real idea of what artificial intelligence is beyond a few Hollywood fables. And yet, considerable jumps in the field suggest that this technology could significantly impact our lives in the near future, without our culture having invested much thought into what that might mean.

It’s against this backdrop that a new renaissance in A.I.-inspired art has emerged. Over the course of the last two years, superstar artists such as Trevor Paglen and Pierre Huyghe engaged the technology—often to critical acclaim. Following last year’s $432,500 sale of an A.I.-generated portrait by the Paris-based collective Obvious (at nearly 45 times its high estimate), Christie’s announced it would launch a day-long Art and Tech summit on June 25 along with an exhibition by Transfer co-Founder and director Kelani Nichole. Shows at the Barbican, The Hek and The Mak all open within the next three months.

More locally, though the exhibition “Forging the Gods” presents nine artists whose art adds variation and depth to the common Terminator narrative—that the advent of A.I. brings god-like powers to technology and inevitably could lead to terrors of the highest order. With not a single weak link in the show, “Forging the Gods” not only offers an update on an old narrative, but begins to articulate what’s at stake.

Organized by the formerly Brooklyn-based Transfer Gallery (soon to be located in L.A.), the show takes place at On Canal, a new district for pop-ups supported by Wallplay and dedicated to hosting short-term brand activations, art installations and innovative programming. “Forging the Gods” transforms one of Wallplay’s 20 Canal Street storefronts previously occupied by cell phone shops and jewelry merchants into a cavernous multiplex.

“The works the show function in two ways,” Julia Kaganskiy, the show’s curator explained. “One is to help us assess how A.I. functions in the world today and the invisible labor and biases that are part of that. The other is to help us imagine different ideas of what A.I. could mean for society in the future.” Kaganskiy is also the former director of New Inc, an incubator that was founded by the New Museum in 2013 to foster projects that intersect with art, design and technology.

About half of the artists in Kaganskiy’s exhibition favor dystopic visions of future A.I. In the window space of this large storefront walk-in, for example, Lawrence Lek invites visitors to play 2065, a recursive video game in which an invisible intelligence battles residences in a video game that looks just like the video game. No figures exist because they are all occupied by the A.I. Peter Burr’s 80-minute animated video Dirtscrapper similarly imagines a spare world. In this piece, “smart architecture” run by artificial intelligence rules the lives on inhabitants, who matter-of-factly describe the sun as “the color of blindness” and the ability to “recreationally inhale intelligence.” In yet another fearful vision of the future, Theo Triantafyllidis’ three-channel video animation depicts a scenario in which nature competes for resources with an alien A.I. that’s hijacked the firmware and infrastructure of mega tech companies like Amazon and Google.

Even the more lighthearted pieces in the show feel a little sad. Lauren McCarthy’s Lauren, for example, takes the form of an infomercial in which an Alexa-type smart device with artificial intelligence capabilities mainly serves to make sure users don’t leave the house with bad hair and have someone to speak to. “It’s like having a roommate or friend, but we’re always talking about me,” says one customer. Following up on that work, McCarthy created Someone, a remote surveillance and smart home hack in which a handful of volunteers signed up to have selected utilities and appliances controlled remotely by gallery visitors over the course of the exhibition. This show presents the documentation from that show, but while at “Forging the Gods” I ran into a participant in the experiment. She told me she experienced six weeks of having the lights in her apartment randomly turned off and on. Nobody was helpful.

Human and technological limitation proved a common theme in the exhibition. Stephanie Dinkins tries to forge a relationship an A.I. that’s said to be capable of emotion, yet hilariously didn’t seem capable of answering basic questions. Pinar Yoldas imagines a world in which an A.I. kitten solves political inefficiency by running all major infrastructure and loving up to three million people at once. Anna Ridler and Amy Cutler pair an A.I. neural network built from text drawn from female protagonists in romance novels with re-purposed footage from Walt Disney’s Nature’s Half Acre to produce what resembles a film told from the point of view of a butterfly. The only point of optimism, if it can even be described that way, comes from Jenna Sutela, who uses machine learning to create a new language based on the movement of a bacteria strain said to be able to survive on Mars. The show’s wall label describes the piece as giving voice to “entities that cannot usually speak.”

Sutela’s piece employs the absurd, a quality so plentiful in this show, that the experience can be near disorienting for the viewer. Perhaps the best example of this is Zach Blas and Jemima Wyman’s video im here to learn so :)))))), which imagines an A.I. millennial chatbot named Tay who intersperses words like “dude” and “awesome” into her monologues. As she tells the story, within hours of her release her abilities to learn were trolled so aggressively that she became genocidal, homophobic, misogynist, racist and a neo-Nazi. It took only a day before Microsoft killed the experiment, and activists launched a change.org petition claiming infringement on freedom of expression. Rebuilt as a 3-D avatar, Tay’s storytelling evokes the more surreal qualities of a Ryan Trecartin narrative but with empathy and greater criticality. “Repeat,” she tells us, “I learn from you, and you are dumb too.”

This reality stands in contrast to our hopes for A.I. In the 2017 discussion I participated in, several members of the audience wanted to know how developments in the field could solve all our problems. No one on the panel could indulge that fantasy then, and nor could they now, in part because the popular mythology “Forging the Gods” builds upon remains firmly in place. The purpose of a Terminator isn’t just to destroy humanity but to reveal our hubris and fallibility. Possibly, a robot with a bunch of guns will kill us all, but as Blas, Wyman and so many other artists in this exhibition make clear, that undoing will be facilitated by our own impulses. 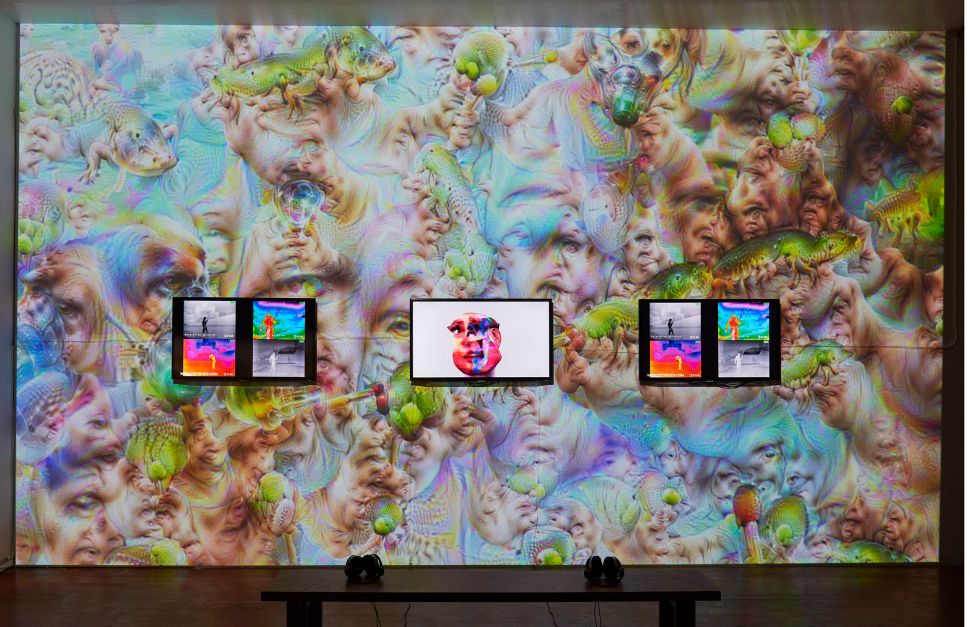