On Saturday morning in Dallas, artist Tony Matelli gave a talk at the Nasher Sculpture Center about his decades-long career, during which he and his team of assistants have created sculptural works that are mesmerizing in their realism. Some of his most effective pieces take the form of weeds, playfully sprouting up from the floor of gallery spaces.

A few years ago, one of Matelli’s seminude Sleepwalker sculptures ignited a firestorm of controversy when it was installed on the grounds of Wellesley college. Some students started a petition to have it removed, calling the work “a source of apprehension, fear and triggering thoughts regarding sexual assault.”

Matelli addressed the uproar in a conversation with Observer, and also discussed his new “Garden” sculpture series, on display this month at The Joule hotel in downtown Dallas.

Observer: What are your overall impressions of this year’s Dallas Art Fair?
Matelli: I was at the fair maybe two or three years ago, and I was super impressed, which is why I was so excited to come back for this one. What I like about it is that it’s so small. I have a lot of experience going to a bunch of different fairs, and unfortunately something like Miami is just so hectic and and so frenetic. You end up waiting in lines at parties. There’s a lot of competition for this party or that party, which dinner you’re going to, who’s doing this ,who’s doing that. It’s mayhem, and I hate it. I absolutely hate it. And you never get to hang out with the people you want to hang out with.

The experience of Dallas is totally the opposite—it’s super manageable. Everyone goes to the same party. Everyone stays in the same hotel. You can wake up and have breakfast and run into people you would otherwise not. And for that reason I really love it, and I actually think it’s more productive for someone like me.

I thought what you said at your talk about your Stray Dog sculptures in Chicago was interesting.
Well, the first one was in New York through the public art fund. But they didn’t have enough money for me to do three of them, which was always the original plan. So then about a year later, I was given the opportunity to do that piece again in Belgium. In that case I was able to make three of them. And it was really successful and a very cool project.

Speaking about the dog sculptures, you said you really didn’t like the corporately mandated public art you’d seen. How do you feel about something like the Dallas Art Fair, which is collaborative and intimate and manageable, like you said, but also, you know, sponsored by Bank of America?
Let me be more clear about what I meant. My objection to that sort of thing is not an objection to corporations at all, although there’s plenty to be said about that. It’s an objection to the fact that a work of art can be co-opted as a symbol of a corporation, where it has nothing to do with the intent of the work—nothing to do with the artist at all, other than the fact that they bought it and put it out front. It becomes a kind of hood ornament for that corporate building.

You see the Robert Indiana piece outside the bank and it’s that, you know? You see the Mark di Suvero outside a particular bank—it’s almost always banks or insurance companies. It’s their corporate emblem. But I wanted to make sure that no corporation in their right mind would choose to have [the dog statues] as their corporate emblem. It would be too pathetic. If they bought it and put it in their collection or in their employee park or something like that, I’d have no problem with that. I just didn’t want it to be debased to the level of it being a symbol for the institution.

I like what you said about wanting to create sculptures that evoke empathy. A lot of people at Wellesley College had a negative reaction to your Sleepwalker statue, while people actually pet your dog sculptures. How do you feel about your dog sculptures evoking more empathy than your sculptures of humans?
Well, I think humans are funny that way. I think in general humans have more empathy for dogs than they do for people. I see it almost every day in New York in the way people behave with other people versus the way they behave with dogs. Dogs are literal empathy magnets. That’s essentially the reason they exist, so they’re uniquely suited for that. Because they don’t have anything to get in the way of empathy—they don’t have egos in the way that we understand them. That’s why dogs are so successful in receiving our affection.

What were you thinking when you decided to install Sleepwalker at Wellesley?
I have to say that we didn’t think much about the context. I know it was a women’s college, but I never once thought about that, honestly. I actually made a female Sleepwalker—it just wasn’t the one we put there. I never once said to myself, Oh, this is going to be triggering because of some kind of domestic breakdown in a particular family of one of these women here. Never once did that cross my mind. And I think one of the good things to come out of this is that now maybe it’ll cross my mind. But still, I think it’s kind of infantilizing to then say that this campus cannot handle a sculpture like this. That’s just insane.

Why did you choose to work with your sculptures that are currently on display at The Joule?
For me, it’s really arbitrary, almost just by chance. When we find a cool statue, we’ll make a piece with it. If we don’t find a cool statue I’ll sculpt one and we’ll make it that way, and then we adorn it with whatever kind of perishable items we think look good. But I’m never like, “This piece from art history, let’s violate that moment. Let’s play off that somehow.”

I don’t necessarily see the fruit on those statues as a violation.
I kind of do. I think of it as a soft graffiti. Like a pie-in-the-face kind of vibe. In fact, the origin of this body of work came from everyday items. I thought a broken-down, rusted washing machine with a fresh strawberry on it would be a very compelling image. And so I was pursuing this body of work in that way, and I wanted people to feel it more with their bodies and have more of a connection to themselves. So to me, the broken-down object doesn’t matter. I almost don’t even think about it.

How much do you think about value in terms of your own stuff? Do you value value at all?
You mean the price? Yeah, of course. In terms of commercial value, the more money I make, the more attention the work gets and the more ability I have to make better, bigger work. So that’s super clear. I mean, that’s kind of a Jeff Koonsian rationale of high prices, and I think he’s right, actually. I believe in that. I think artists should be making lots of money, because these things should be treated as valuable objects. And if we want to care for them and treat them as valuable objects, they need to actually have value. So yeah, I want those prices to be as high as the market can sustain them.

Are you making anything new?
We’re making a sculpture for Frieze Art Fair that is of a lion—a broken-down lion. I think it’s an old Assyrian lion that I found at the Met. I doubled it in size and added some other details to it, just to make it a little more interesting. And so we’re casting that in a new cast stone material that we’ve never worked with before. We’re always looking for better and new material to work with, something that emulates what we want the end result to look like.

What do you want the end result to look like for that one?
We want it to look like a kind of limestone, so we’re actually using limestone powders and concrete, and we’re trying to keep as close to the desired materials as possible. I think it’s going to be sick. 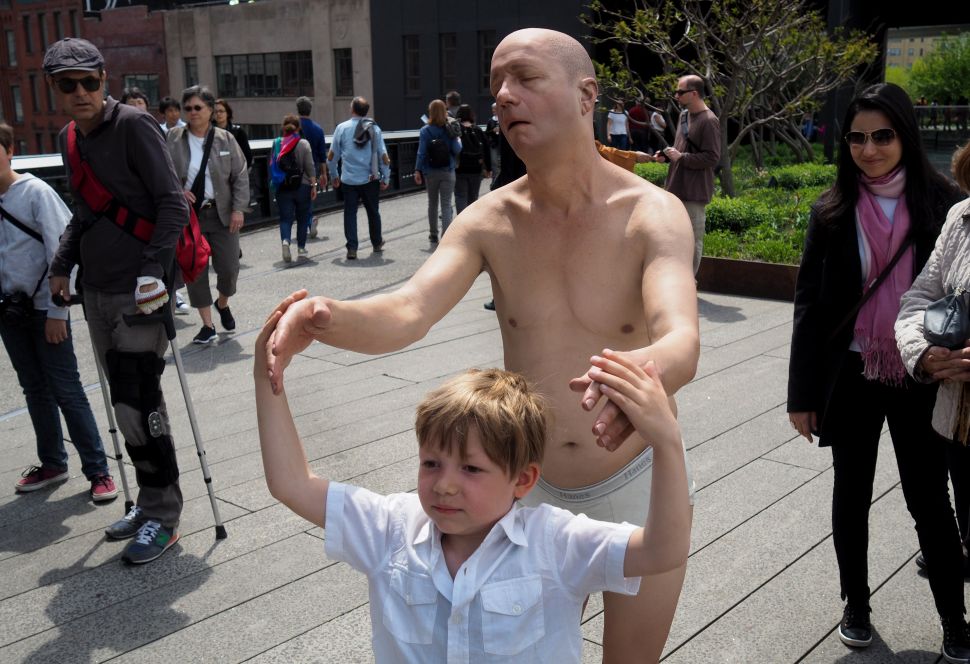