I haven’t the faintest idea what Beetlejuice is all about, but the noisy Broadway musical based on Tim Burton’s critically despised 1988 movie that has inexplicably developed a creepy cult following has arrived at the Winter Garden like a garbage strike in Beirut. The night I saw it, the place was jammed to the balcony with rabid members of the Beetlejuice Fan Club, shrieking their heads off like they were at the opening night of some theatrical miracle on the level of Gypsy or West Side Story. Aside from the usual cult followers, I suspect this horror will appeal mostly to pretentious grown-ups who discuss the psychological impact of Pee-wee Herman at cocktail parties at the Museum of Modern Art.

Theater of the Absurd invades mainstream Broadway? Alice in Wonderland on LSD?  Mixed-up reels of Ghostbusters running backwards? I’m at a loss to describe it except to say it left me with a headache no Excedrin can cure. Weird and macabre—until it isn’t—this sordid collection of gimmicks, sight gags and desperate jokes (“I’m invisible,” bellows Beetlejuice—”and powerless…like a gay Republican!”) centers on the titular corpse played by Alex Brightman in the role created on screen by Michael Keaton.

After a rousing opening number called “Being Dead,” (a send-up of Stephen Sondheim’s “Being Alive”?), Brightman’s Beetlejuice collapses from sheer exhaustion, but as he warns the audience: “If you drop dead, the show will go on.” The chemically charged fans cheered his every move, while I kept wishing he would just disappear. No such luck. What followed was two hours and 40 minutes of murder dedicated to the premise that no matter how awful the world we live in may be, the afterlife is nothing to look forward to.

I won’t bother to bore the uninitiated with the details of a plot, since there isn’t one. Beetlejuice is a corpse who can’t come to life until he can find a living person to say his name three times. To that end, he kills off a nice married couple called the Maitlands (Kerry Butler and Rob McClure), drags them up to the attic and teaches them how to haunt their own house to drive away the new owners, who are so depraved they make the Addams Family seem retro. At one point a roasted pig rises from a serving tray in the middle of a dinner party and imitates Harry Belafonte singing “Day-O” with a Jamaican accent.

Everyone in the cast has been hired according to how loud they can scream, which they do with an eardrum-shattering collection of what some people call music, a circus of singing cadavers, a field trip to hell inhabited by a dead football team and a lot of ghastly puppets. The lopsided David Korins sets are an ugly kaleidoscope of tangerine, fuchsia and aquamarine, lit by blinding strobe lights. The deadly “book” by Scott Brown and Anthony King and the alleged “songs” by Eddie Perfect—who is anything but what his name suggests—make me want to take back everything I said about Tootsie.

Between dinosaurs, pinheads and poltergeists, there is one thing to savor in the performance by McClure, who knocked my socks off in the title role of another (and much better) musical, Chaplin. As the baffled home owner who tries to make the best of his new status as a ghost, he’s wasted here, although he does provide this travesty with its only moments of charm and reality-based humor.

The point of Beetlejuice, I guess, is that being dead doesn’t make things any easier. Oh, lurid thought. That’s the only thing left I was looking forward to. 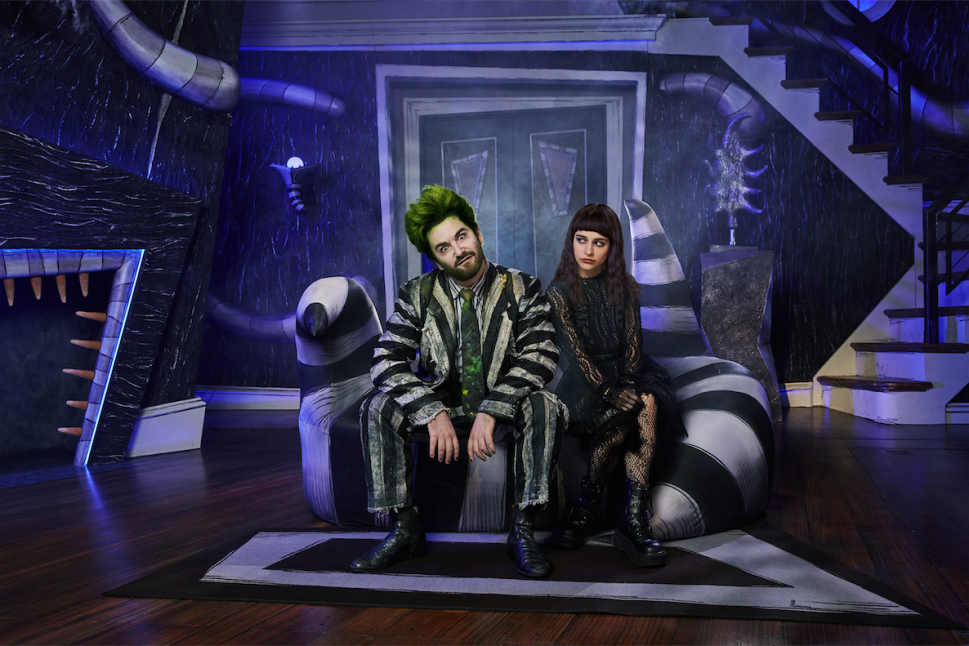