Amazon CEO Jeff Bezos and retired Microsoft founder Bill Gates haven’t been lumped together much in the news aside from discussions about who the richest person in the world is. One reason has to do with the fact that when Gates was the wealthiest man on the planet, he was also known as a star philanthropist who donated tens of billions of dollars to charity, while Bezos, who bumped Gates from the top spot in 2017, often faced criticism for not giving enough.

But that was before the two mega-billionaires discovered a common interest: fighting Alzheimer’s disease.

Gates’ philanthropic vehicle, The Bill & Melinda Gates Foundation, has teamed up with Bezos and his soon-to-be ex-wife, MacKenzie Bezos, to donate $15 million to the Diagnostics Accelerator, a project under the Alzheimer’s Drug Discovery Foundation that supports researchers looking for simple ways to prevent Alzheimer’s, ADDF announced on Tuesday.

Gates was already a donor on this project when it was launched last summer. The Bezoses have joined as a new funder.

Alzheimer’s has been a tough disease for medical researchers to study. Existing methods to diagnose it are either invasive (e.g., a spinal tap) or extremely expensive (e.g., a brain scan). Moreover, most patients don’t opt for these procedures until they’ve already developed serious signs of cognitive decline and other symptoms.

Gates described this dilemma as a classic “chicken and egg problem” in a blog post last year, when he wrote the first check to Diagnostics Accelerator.

“What does the ideal Alzheimer’s diagnostic look like? It needs to be cheap and easy to administer,” he wrote in a new post on Tuesday. “It should tell us not only whether you have Alzheimer’s, but how far advanced the disease is.”

“The good news is that we’re finally within reach of that goal thanks to significant breakthroughs over the last couple years,” he added, pointing to a 2017 discovery of using simple blood tests to detect Alzheimer’s. “We’re close to reaching the point where we can push past the chicken and egg problem.”

Even better, however, would be a completely noninvasive method, such as a voice or gesture detection tool.

Gates referred to an ongoing study that seeks to find clues to Alzheimer’s by tracking changes in people’s voices as they age. “We don’t know yet if voice analysis will work. It’s still early in the research process, and we don’t even know what changes in speech patterns we’re looking for yet,” Gates wrote. “But I’m excited about a potential future where identifying your risk of developing Alzheimer’s is as simple as an app on your phone that you can instruct to listen for warning signs in your speech.”

Correction: The article has been updated to reflect that Bezos’ contribution to the Diagnostics Accelerator was unrelated to his philanthropy fund, the Day One Fund. 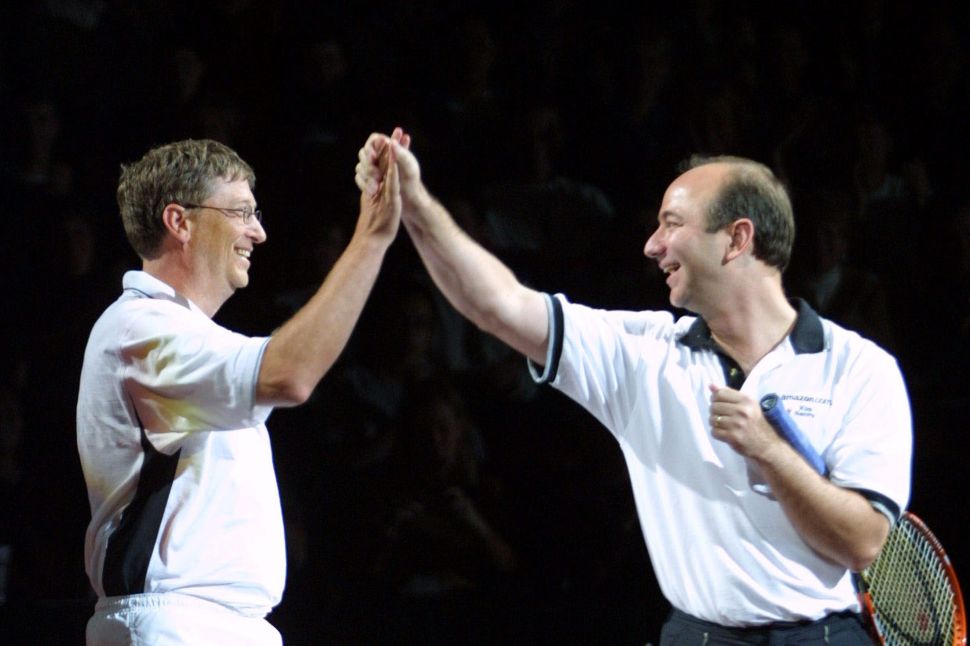