At about 2 p.m. on St. Patrick’s Day—a Sunday—two Chicago police officers were arresting a man for drug charges following a traffic stop in West Garfield Park, an almost entirely black neighborhood on the city’s West Side, five miles away from the dyed-green river and green beer flowing on the Loop. According to the police account of things as reported in The Chicago Tribune, the uncooperative suspect was resisting when a “crowd” of about 10 people gathered and took charge of the situation.

As one officer dealt with the suspect, the other turned to deal with the bystanders. One managed to nab the alleged drugs and run. The second officer gave chase, leaving his partner alone. After someone in the group “implied that they had weapons,” the lone cop backed away “for his personal safety,” allowing someone else to grab the suspect and flee. An initial search of the neighborhood, where the median income, $24,000, is almost one-third of the city average, turned up nothing. Ten days later, both the suspect and the man accused of disrupting his arrest were apprehended and charged with felonies.

At the height of the incident, the crowd had swelled to a menacing “mob” threatening to “reach for their own weapons to shoot [the cops] dead,” in the viral words of Tribune columnist John Kass. As for the event itself, it has become both viral content and metaphor.

Holy crap. A mob surrounded two cops making a drug bust in Chicago and forced them to let the guy go and took the seized drugs out of the squad car. That is terrifying. https://t.co/8SWtqSii2I

Some context is necessary. In 2014, a Chicago police officer shot and killed Laquan McDonald, a 17-year-old black teenager. Unlike other police-involved shootings, the shooter—whose testimony claiming McDonald was making threatening moves was contradicted by video—was convicted, the first conviction for an on-duty shooting involving Chicago police in 50 years, and in February, the officer began serving a seven-year term in prison. Three other cops, who also swore that McDonald was moving toward the police when he was shot, were acquitted of obstruction of justice, official misconduct and conspiracy for lying.

Kass did not mention McDonald in his column. He did not mention these circumstances, nor the order from a judge mandating less racist police tactics following a federal Justice Department probe. He did not cite data showing violent crime is on a downward trend in Chicago, nor did he note that President Donald Trump’s Justice Department is kiboshing efforts to reform police departments that might build trust and make cops’ jobs easier.

But he did name-check the former cop, whose plight now serves as a moral that portends a summer of violence which other police are now helpless to stop. Even when faced with a legitimate threat armed with a gun and threatening to shoot—not something completely different; not a teenager with a knife, walking away—Chicago cops are now gun-shy.

They don’t want “to shoot anyone, and wind up charged and in jail,” Kass quoted an anonymous police officer as saying. Blame is due to spineless politicians staying silent about the incident, but Kass also singled out his colleagues in the press. Had the police used their weapons, the “news media” would be “metaphorically skinning them alive,” Kass fumed. “The street is officially no longer afraid of the Chicago police.”

Why “the street”—that is, “the hood,” where Kass wraps up his column, and the people who live there—should be afraid of the police, who are ostensibly there to provide for their safety, is not examined. Nor was there much time spent asking why a police presence might be so unpopular that the public would literally take over. Instead, similar lamentations that added “social justice warriors” to the list of cop-haters fostering a culture where police are helpless victims appeared on law enforcement blogs.

What happened in West Garfield was absolutely a violation of numerous modes of conduct. It was a subversion of the state as the holder of a monopoly on violence. It was a contradiction of existing regimes of power. It was the public, which has long tired of the carceral state and the drug war, directly imposing its will. It makes cops look very silly. For all these reasons, it was extremely popular on Left Twitter. But it also makes a few fundamental facts very clear. What’s most at risk is the old way of doing things.

A few years ago, I interviewed the former head of San Francisco’s police union, an “old-school” former narcotics inspector who joined the force around the time when Dirty Harry movies were in theaters. He did the street-level work—the front-line wage labor—that guaranteed the United States would imprison more of its citizens than North Korea. “The war on drugs has failed” was a thing said by mainstream politicians in positions of power. Did this kind of hindsight inspire any reflections? I asked him.

Absolutely not, he responded, promptly and firmly. The people in those affected communities wholly approved. Even if the people arrested were their friends and family—even if it meant them going upstate and coming back with a mark on their record that meant their only viable job opportunity was to go back to doing the same, but this time more desperate. “We were just responding to calls,” he said of the mentality in the inner-city neighborhoods, the black and brown ones, where every white person in the 1980s and 1990s who wanted a nickel bag knew to go and where many white people seeking a hip address and cool authentic culture moved to in the 2000s and 2010s. “They wanted us there.”

Thus the spectrum of discourse reveals itself: siege mentality on one hand, anarchy on the other. If police were purely reactive, here not to impose “law and order” but to “collaborate” and “problem-solve” according to the community’s will, that would be something closer to what criminal justice wonks call “community policing,” the kind of approach suggested in expert panel reviews and in consent decrees. Could you call the spontaneous interruption of an arrest community policing? Maybe, but nominalism isn’t the point. The point is that a community did say, loudly, what kind of policing it would like to see—and the reaction was outraged effrontery rather than reflection.

Police remain one of America’s few well-loved and trusted institutions. Police are far more popular than elected officials or the media. This is to say there is no widespread cop-hating movement in America. Far from it. And aside from this isolated incident, there is no clear sign there is such feeling in Chicago. The two men who briefly fought the law “won” for less than two weeks. That they could inspire such performative fear—as well as a preemptive justification of any violence that police are sworn to prevent—and lead to a critique not of police’s handling of the situation but politicians and the media is a demonstration of how resistant the institution is to critique and change. 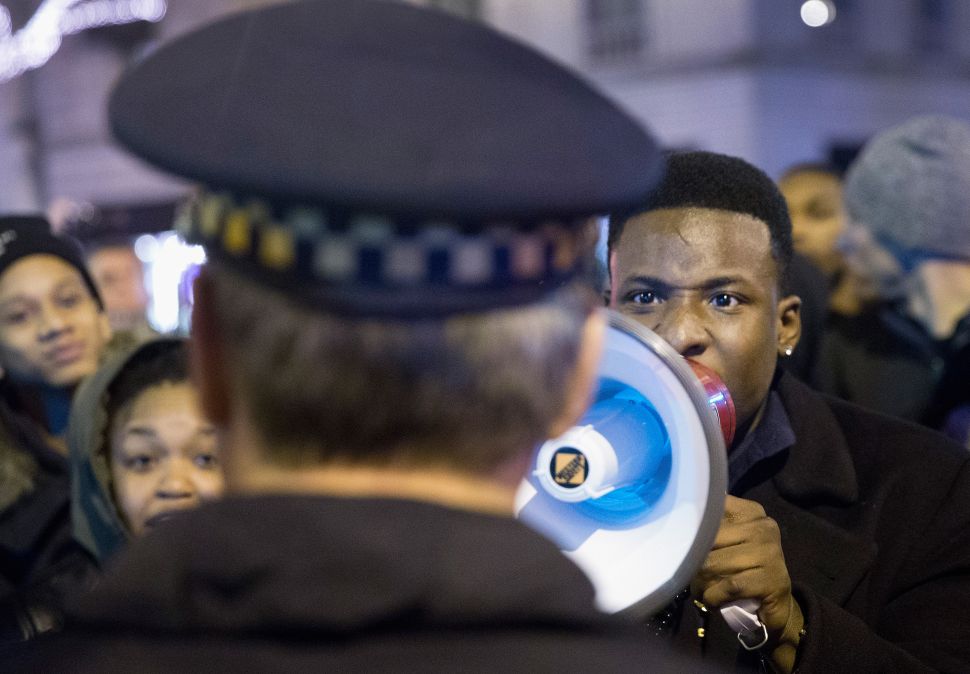