An increasingly militarized police force or the world’s largest prison population might be justified in authoritarian circles, if either affected the availability or popularity of substances deemed unfit to be marketed and sold to the citizenry. But they do not; and so, “the drug war has failed” is a thing now said by mainstream politicians with presidential ambitions. Anyone old enough to remember the 1980s, or Joe Biden’s political career, will tell you what a sea change this admission is.

But what if—in addition to costing too much money, wrecking communities, turning cops into a policing-for-profit occupying army, and not doing much at all to halt the flow of drugs through the Americas—U.S. international drug interdiction efforts have made it all worse… as in they actually spread the area used by cocaine traffickers wider, thus engulfing more geography and involving more people?

Spreading the failure around while still allowing significant amounts of drugs into the United States is all the Drug Enforcement Administration (DEA) has been able to do for decades, according to a research paper published earlier this month in Proceedings of the National Academy of Sciences.

Led by Nicholas Magliocca, a geography professor at the University of Alabama, researchers used publicly available data—known or alleged trafficking routes, seizure data and other information you or I could find with a computer—to create a behavioral model of drug-trafficking organizations’ decision-making processes.

Called “NarcoLogic,” the researchers’ model mimicked cartel decisions “in response to interdiction forces” in order to “investigate the root causes” of why interdiction efforts have failed to halt the flow of drugs into the U.S.

The study itself makes for a fascinating read, but TL;DR: Every time a route is blocked by limited interdiction efforts, other routes become more attractive and are employed by traffickers. And here is the fundamental quandary, one whose lesson seems to escape the DEA—the larger an area used by drug traffickers because of interdiction, the harder the drugs are to interdict.

If a shipment was seized, another route was used. Without a finite number of options to ship drugs north, drug traffickers in the computer model still found ways to ship plenty of product north and “maximize profits,” according to the researchers—sort of like what’s been done in real life.

“Even when it appeared that interdiction was effective (i.e., increased seizure volumes), there was little effect on the value of cocaine trafficked and geographic extent of narco-trafficking’s influence,” the researchers wrote.

Publicly available data seems to support the study’s findings. Colossal amounts of cocaine continue to make its way into the United States, where a drug-overdose crisis continues to claim a record amount of lives. Meanwhile, the DEA continues to pursue an interdiction-first strategy, and continues to ask for more and more money to do it.

Reached via email for comment, a DEA spokeswoman would say only that the agency “has no data to support this study,” and did not respond to follow-up questions.

The study also bolsters existing signs that building a physical barrier on the southern border—such as a very expensive wall, made of steel, or concrete, or whatever—would not do a damn thing.

While the NarcoLogic model did not include the imposition of a wall, “if cocaine demand in the U.S. remains high and there continues to be large sums of money to be made in drug trafficking, then this work demonstrates that supply-side, counter-drug strategies alone are at best ineffective and at worst intensifying the trafficking problem,” Magliocca told Observer in an email.

“These networks have continually demonstrated their ability to adapt to interdiction efforts and identify and exploit new trafficking routes in response,” he added.

Other studies have shown that in response to a militarized border with Mexico, drug-trafficking organizations have shifted to routes through the Caribbean and into Florida.

Donald Trump, you may be interested to know, has only made this preexisting condition worse. Since entering office, Trump has consistently proposed spending more money on drug interdiction rather than treatment or prevention, an approach adopted by Barack Obama in the twilight years of his term. There is also no data to suggest that the $8.6 billion Trump wants to spend on the border wall would stop drugs from entering the United States.

The drug war is bad and was bad from the beginning. And Donald Trump has found a way to make a bad situation abject. 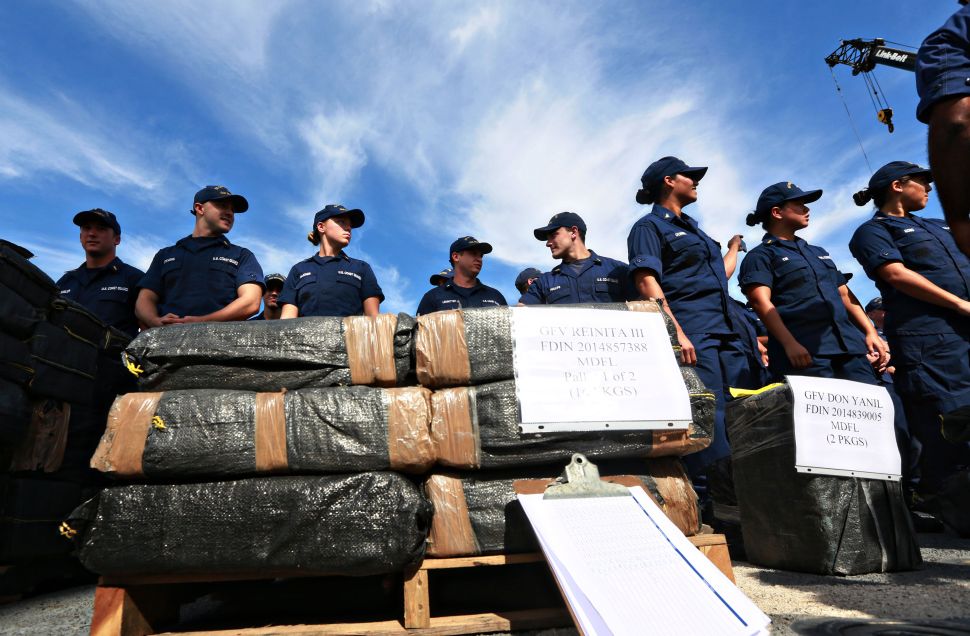