On Friday, journalists and fair exhibitioners were coaxed away from the hustle and bustle of the main engine of the Dallas Art Fair and shepherded into the homes of major patrons and facilitators of the city’s art scene.

Early in the morning, a caravan arrived at the home of Deedie Rose, a member and former president of the board of trustees of the Dallas Museum of Art and a decorated humanitarian. In 2013, Rose received the Linz Award for her civic efforts on behalf of the city, and she remains deeply earnest in her desire to enrich local institutions with work she deems significant.

Her limestone residence, so spectacular that it inspires near-painful aesthetic envy, looks like a home envisioned by a person whose love for art is matched only by her instinct for creating it. Rose essentially manifested a museum for herself and her family and tucked it away just south of the Dallas Country Club.

The Turtle Creek House was designed by architect Antoine Predock and completed approximately two decades ago, and it is packed to the brim with precious works (cameras, tragically, weren’t allowed). A massive jewelry collection featuring a necklace by Louise Bourgeois, a Tony Cragg sculpture of a tree made up of repurposed plants and a cluster of sculptures made by the prominent Argentine conceptualist Victor Grippo all leapt to meet the eye. The most wonderful piece in the house was extremely small: a golden bracelet designed to look like corrugated cardboard. The ornament was unlabeled, but it was likely made by the Swiss designer David Bielander.

Later in the afternoon, the spotlight shifted to an entirely different generation of Texas patrons. Rose, along with her late husband, former Texas Rangers co-owner Rusty Rose, has been prominent in this scene for decades, but collectors Joe and Kristen Cole are relatively new to Dallas, having only moved there a couple of years ago from Los Angeles. But that doesn’t diminish the impact they’ve had on the area. Kristen is the president of Forty Five Ten, a luxury retail store on Main Street that interpolates freshly commissioned artwork into its displays of covetable goods (she just opened a new flagship location in Hudson Yards in New York City). Joe is a creative director at Headington Companies, a massive firm that has invested hundreds of millions of dollars in revitalizing downtown Dallas.

At three in the afternoon, the couple kicked off a mini sale and reception at their home in Preston Hollow, a 10-minute walk from President George W. Bush’s house. The intimate pop-up exhibition was part of the couple’s collaboration with the NYC galleries CANADA and Marlborough, and the effect was striking: technicolor paintings by Katherine Bernhardt, Katherine Bradford and others were temporarily affixed to the pure white exterior of the house.

“We just drilled in and mounted them the way you would with any other wall,” Joe Cole said. “It can be filled in, and actually, when we decided to do this, we’d scheduled to repaint and stucco the house this summer, so it really doesn’t matter.”

A crowd flowed into the backyard, cannily stepping around an inviting-looking pool and scooping up margaritas and cold beers from the open bar. The artists Jordan Wolfson and Tony Matelli were present, and deep in conversation. At one point, a hyperrealistic piece by Matelli that resembled a common garden weed had to be adjusted after it was jostled by an unsuspecting guest.

A man in a pink baseball cap which read “Claude Monet Lilies” made the rounds. Collector Kaleta Blaffer Johnson remarked how compelling she finds the work of textile artist Sheila Hicks. “I like to come to train my eye and just kind of see what’s hot right now,” Johnson said when asked whether she was planning to purchase anything on display at the party.

“Dallas has been really full of opportunity for us,” Cole continued. “It’s a really hospitable and welcoming place. I’ve been working on projects here for six years now, and I hope that we’ve just been able to be a part of adding to the already-existing and terrific art and philanthropic culture.”

If this cozy afternoon show was any indication, this is certainly the case.

The Dallas Art Fair is runs through Sunday at the Fashion Industry Gallery at 1807 Ross Ave. 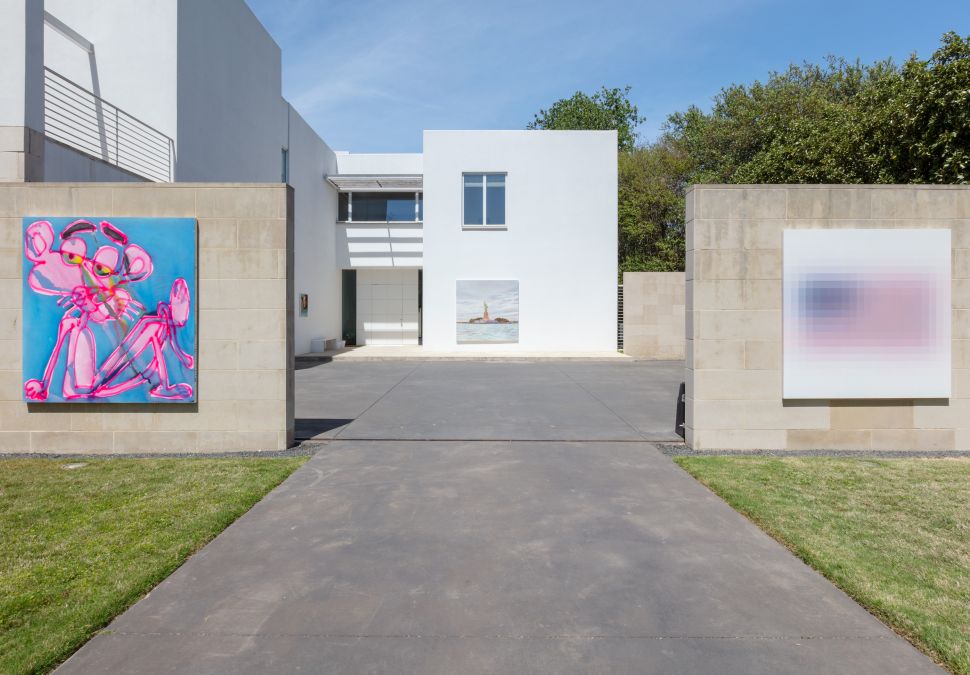