In the 2004 film Hellboy, directed by Guillermo Del Toro, the title character is introduced lifting weights in his cozy subterranean room, jonesing for a candy bar, smoking a cigar and surrounded by the cats, whom he loves. The soundtrack is Tom Waits’ “Heartattack and Vine” from the 1980 album of the same name.

In the 2019 film Hellboy, directed by Neil Marshall, after some brief scene setting in Tijuana, the character is introduced with a cover of “Rock You Like a Hurricane” by the Scorpions. He is at a Lucha libre match, so there are no cats, but the candy and tobacco products are also missing, and neither show up over the course of the film’s remaining two hours.

These changes reflect how the culture has shifted over the last decade and a half in regards to how it views its comic book heroes. Back in the early aughts—when superhero comic book movies were not yet the dominant cultural force they were to become—it seemed perfectly reasonable, even fitting, to have an alternative take on the form. These days, there is little space for experimental jazz-rock icons or nicotine in these kinds of movies.

It’s dispiriting that an oddball sensibility is not even allowed here. What we get is an R-rated update that purports to be “dark,” but only in the limited sense where that word means being chock-full of beheadings and dismemberments. It’s exit Tom Waits; enter Mötley Crüe, whose “Kickstart My Heart,” is among the many generic rock hits on a soundtrack that seems designed to be released on K-tel. (If ever a film cried out for some Norwegian Death Metal, it’s this one).

There appears to be a total of two ideas fueling the reboot. The first is to make the movie at least partially a horror flick; the second is to make David Harbour, the guy from Stranger Things with a longshoreman’s build and an amiable air, the lead. The first gambit works out disastrously; the second, just fine given the circumstances.

Real horror requires, for starters, actual scares; by my count, there was only one in Hellboy, when a corpse hand reaches up beyond the grave. The rest is just gore and body parts being lopped off willy-nilly and without much flair. (The two beheadings that occur at the siege of King’s Landing in “Blackwater,” the Game of Throne‘s second season penultimate episode also directed by Marshall, are more memorable that the myriad than occur here.) This includes the witch Nimue (Milla Jovovich), who manages to continue jabbering on about vengeance even after her head is removed from her body.

Like a Wiccan Darth Vader, she is trying to seduce Hellboy away from the side of humanity to which he has been recruited since being adopted as a lil’ devil by Trevor Bruttenholm (Ian McShane), a rather sadistic explorer and scientist. There is a fascinating concept buried somewhere beneath the goo and splatter about nature versus nurture and the value of working alongside a species who will always consider you a sideshow, but the film lacks the rigor or curiosity to do anything interesting with it.

Most of the visual choices are muddled and uninspired. The legendary Russian witch Baba Yaga shows up looking as menacing as a melted candle, while Nimue’s chief henchman, a boar-like humanoid named Gruagach, comes off as a not-ready-for-prime-time Muppet. The film does have one extended sequence of visual wit that is memorable and fun, when an already battered Hellboy has to take out three ogre-like giants in the English countryside.

Thank heavens—or perhaps the many hells—for David Harbour. His half-demon can swing from The Dude-like languor to titanic bouts of rage with remarkable alacrity. He brings joy, empathy and humor, even though the script is relatively barren of funny things for him to do or say. (A highlight? He says to a recently chopped off head, “Let’s not get ahead of ourselves.” Yes, that’s as good as it gets, folks.)

The chief battle here isn’t the one on screen between Hellboy and a sixth century witch; it’s between Harbour and the uninspired gore and bland rock music in which his unfortunate first starring vehicle is soaked. He loses in the end, but at least he puts up a good fight. 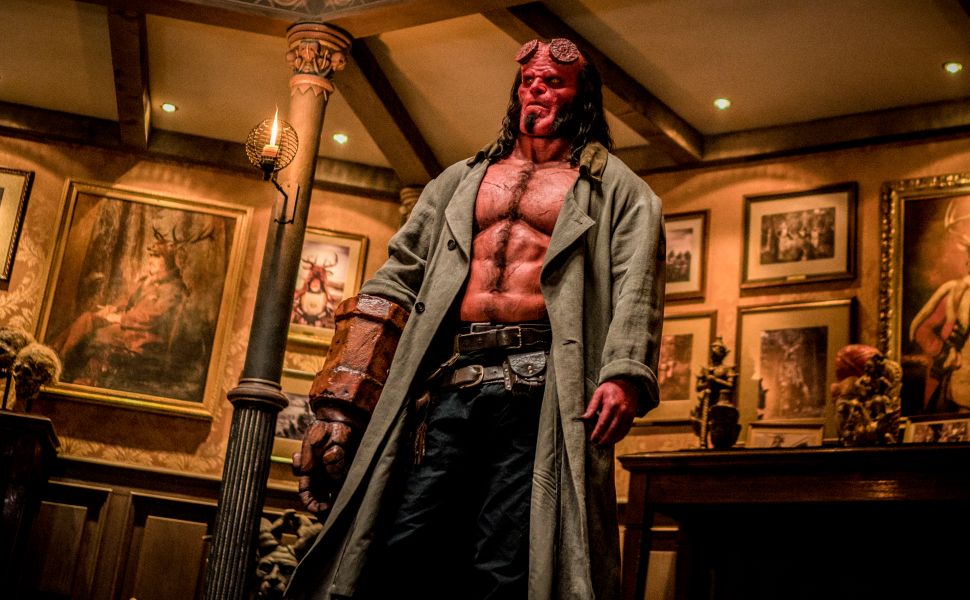