Holy legal action, Batman. On Tuesday night, Twitter complied with a copyright demand from Warner Bros. that would block President Donald Trump from using unauthorized music from Christopher Nolan’s 2012 Batman feature, The Dark Knight Rises, in a promotional campaign video. WB made the move in response to a late-afternoon tweet from Trump that read “Make America Great Again” and included a video that borrowed from the hit blockbuster’s soundtrack.

Now, the media can no longer be displayed on the social platform.

“The use of Warner Bros.’ score from The Dark Knight Rises in the campaign video was unauthorized,” a WB spokesperson said in a statement Tuesday night. “We are working through the appropriate legal channels to have it removed.” The tune in question is Hans Zimmer’s “Why Do We Fall?,” and the media’s swift removal “rules out any need for Warner Bros. to instigate any lawsuits,” reports Deadline.

At the time of its removal, the video had been viewed more than 2.3 million times. Text in the video, which also used The Dark Knight Rises font, read: “First they ignore you. Then they laugh at you. Then they call you a racist. Donald J. Trump. Your vote. Proved them all wrong. Trump: The Great Victory. 2020.”

This is not the first time Trump has borrowed from pop culture since taking office, nor is it the first time he’s referenced The Dark Knight Rises. In 2017, he quoted the film’s villain Bane in his inauguration speech, saying: “Today, we are not merely transferring power from one administration to another or from one party to another. But we are transferring power from Washington, D.C., and giving it back to you… the people. For too long a small group in our nation’s capital has reaped the rewards of government while the people have born the cost.”

Observers were quick to note the similarities between the president’s rhetoric and that of the film’s antagonist. “We take Gotham from the corrupt! The rich! The oppressors of generations who have kept you down with myths of opportunity, and we give it back to you, the people,” Bane says in movie—of course, he was holding the city hostage with a nuclear bomb.

In November 2018, Trump parodied HBO’s Game of Thrones (also a WarnerMedia product) with a poster that twisted the show’s popular catchphrase, “Winter Is Coming.”

“We were not aware of this messaging and would prefer our trademark not be misappropriated for political purposes,” HBO said in a statement at the time. The network’s official Twitter account also sent out this cheeky post:

How do you say trademark misuse in Dothraki?

Maybe POTUS just really likes TV and movies. In December, former Batman star Christian Bale recounted a meeting between him and Trump several years before he became president while he was filming one of the movies. “I think he thought I was Bruce Wayne because I was dressed as Bruce Wayne,” Bale said. “So he talked to me like I was Bruce Wayne and I just went along with it, really. It was quite entertaining. I had no idea at the time that he would think about running for president.” 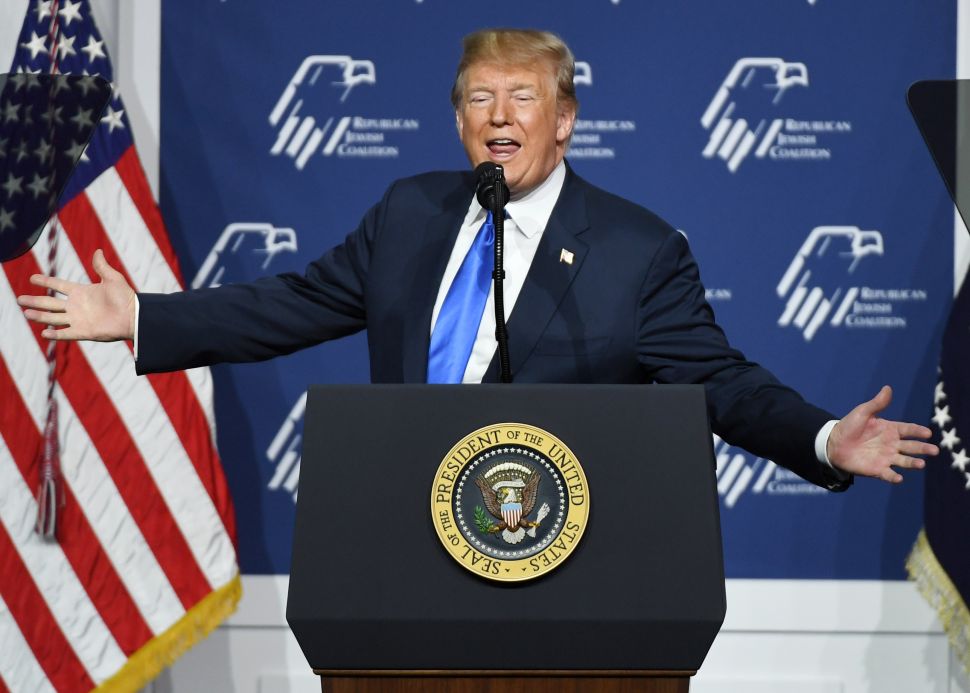